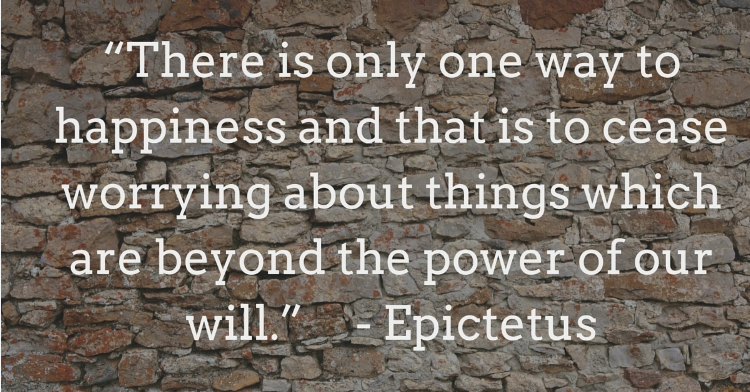 I’m calling on the wisdom of the ancient Greek philosopher Epictetus in dealing with my stress over the U.S. Soccer Birth Year Age Registration mandates. Epictetus said: “There is only one way to happiness and that is to cease worrying about things which are beyond the power of our will.”

Does a U.S. Soccer MANDATE fall outside the power of our will?

I’ve decided, at this point, it does….

There are petitions being circulated, conversations still happening, stress mounting and articles still being posted about the Birth Year Registration mandate that requires teams to move from an August 1 through July 31 registration calendar to a January 1 through December 31 calendar by the year 2017.

I am positive that U.S. Soccer has, by now, heard the arguments against the mandate as the voices have been both loud and pervasive. While their decision seems short-sighted in some specific areas, there has been no indication U.S. Soccer will adjust the mandate to change to Birth Year Registration. In fact, since the new mandates were introduced on August 24, 2015, US Club Soccer and USYS have announced they are shifting to the Birth Year Registration in 2016, a year before the 2017 deadline.

The mandates are moving forward and things will be changing – quickly.

Believe me, I understand parents’ stress as my 14 year-old daughter is one of the smallest on her team and has a November birthday. Her team will be divided in half. Luckily, we are a part of a large club with competitive teams in every age group so kids can more simply shift teams as opposed to smaller clubs lacking in player and team depth.

Reluctantly, at some point, we need to heed the advice of Epictetus and “cease worrying about things which are beyond the power of our will.”

If we don’t – we start to sound like the child complaining about the bad ref, or the position they don’t like that the coach keeps putting them in, or the rainy weather they have to play in.

I’m not saying we have to go as far as to be happy about U.S. Soccer’s new birth year mandates, but I do think we need to accept them and concentrate on taking specific action to most effectively deal with the changes that will result.

1. Clubs and Coaches must utilize their absolute best communication skills and start an open, clear and specific discourse about the plan for their club and teams.

It’s Game Time, club administrators and coaches! Time to be specific, thorough and clear with all of your members. If you are not a superb written communicator, time to call on the help and advice of a volunteer or a board member who is. This communication must be excellent.

The press release from US Club Soccer regarding their adoptions of the changes was well done. They addressed all the possible issues and when they didn’t have absolutely clear and concrete answers for how things would play out for teams such as Competition Formats this summer, they presented an open-ended solution that felt satisfying.

Clubs must follow the lead of US Club Soccer and start informing their members of how the Birth Year Registration changes will play out within their club next year. At this time they can’t be specific regarding specific players on specific teams, but they owe it to all the members to have a plan.

Clubs and Coaches, now is the time to communicate a plan.

2. Parents must be as positive as possible in an effort to relieve any stress their child may be feeling.

This one’s important! Our children are acute observers of our emotion and respond with similar emotion. Simply said, if we are stressed, our children will be.

Parents should focus on the change to birth years as simply being a different experience, rather than focus on the controversy regarding whether it presents advantages or disadvantages. This change is likely harder for parents to digest than athletes. Soccer players are resilient as they are forced to adjust to a multitude of changes (team, coach, teammates, position, schedule) on a regular basis. Parents needs to support their player positively during this adjustment as they would with any other change.

Parents, calm your stress with information: If you are part of a large club that will move players up and down, start gathering birthdates of the players so you can start to see how it may play out. If you can suddenly see that there are 8 players on the current team and 7 players on the older team that will make up one team, you may feel less stress since the result will be an appropriately sized team.

Calm your stress with peace of mind: The coaches and club administrators want what is best for every player and team. Trust this simple fact and know they will be working diligently during this transition to ensure all players have a developmentally appropriate place to play.

Truth be told, it’s just impossible to know for sure how all of this will play out within a team setting because – it’s affecting Every Single Team – EVERYWHERE!

There are so many moving pieces to the puzzle of future team organization – that aside from the guaranteed madness that will ensue next spring during tryout season (as if tryouts aren’t already stressful enough!) – little can be known for sure.

Parents – remain positive and find a way to be reassuring to your child about the upcoming changes.

3. We must all remember that change is stressful, and often the anticipation of change is worse than the change itself.

I will admit I won’t be shocked if this mandate gets adjusted after a couple of years. When U.S. Soccer sees the large number of recreation-level leagues potentially leave organizations operating under the U.S. Soccer charter and join independent recreation-level leagues – the result being thousands and thousands of players not paying individual dues, I can see that U.S. Soccer may decide to adjust the mandate for recreation level players. Believe me, I have got my “I told you so…” already playing out in my head.

However, despite my “I told you so…,” I hope the thoughts I expressed in my article “Four Real Issues to Consider Before Switching to Birth Year Registration” do not come true. I hope that I am overthinking these changes and jumping to conclusions about registration numbers for our newest players, middle-school and high school transition issues and issues for our oldest youth players with half of a team in college.

I do think there is a possibility that a year from now we will realize the anticipation of the change was worse than the change itself.   After all,

So, aptly armed with my “I told you so…,” and keenly aware of the potential affect the mandate will have across the country, I am trusting the fact the club and coaches want what is best for my child and I am heeding the wise ancient Greek words and choosing not to worry about things I cannot change.

I hope you can join me.

Previous Post Parents Need Education about Minor Injury Treatment Next Post Parents are NOT the Problem, They are the Solution. How to Fix Youth Sports.