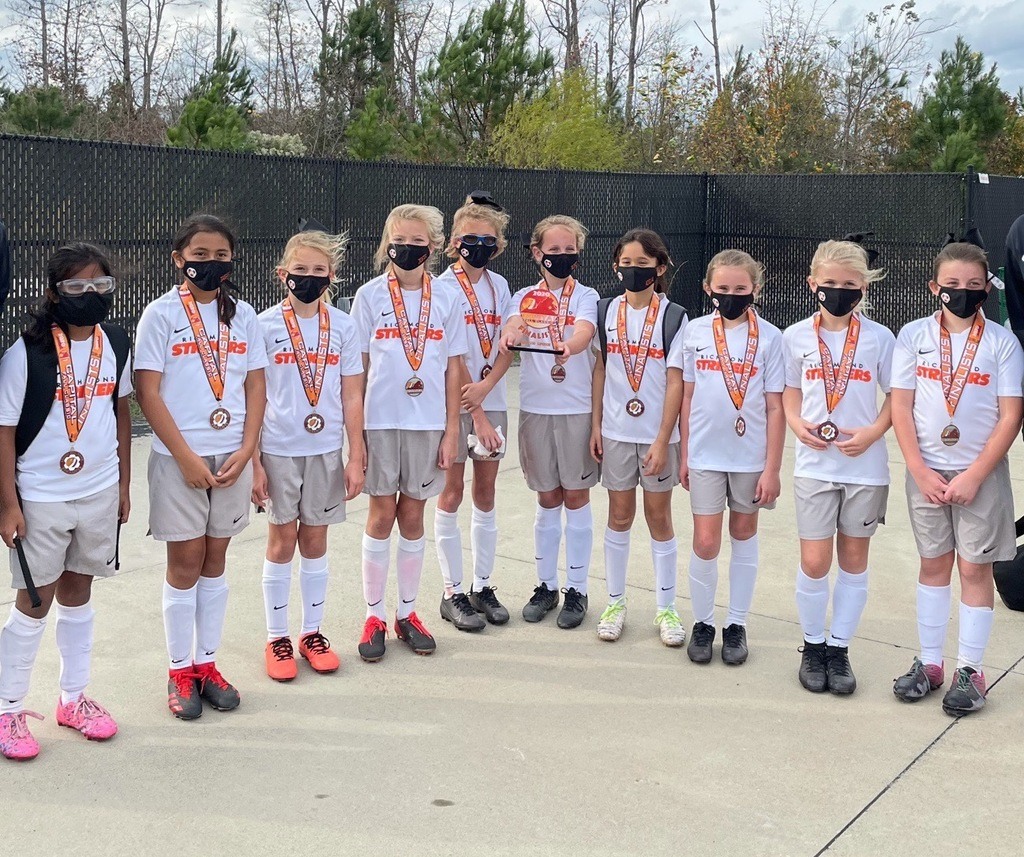 In addition to being a soccer parent, I am also a coach.  This season I have a U-10 girls team with the Richmond Strikers, in Richmond Virginia.  I love these girls – and I am tremendously grateful for their parents.  Despite the fact that winning isn’t the objective for me, I am focused on player and person development, losing every week isn’t fun. Yet, that's just what happened - we never won a game in league play.  My team, the second of four in our club in this age group, was placed in the local league with all the top teams in the area.  We knew it would be a challenging season, but the other local league in our age group would likely have been too easy.

1.  Focus on the Process, Not the Score

I am so very grateful I didn’t have a crazy parent on my team this year who just couldn’t get past the fact we were not winning.  There was no one on the sidelines screaming, there were no complaints to me about the teams’ losing record, rather us adults kept the focus on the process of learning and development that was happening, instead of the score.  That doesn’t mean we didn’t expect the players to show up with a winning mentality – we just didn’t get upset when they didn’t win.

I set objectives before every game and I shared them with parents in a quick “Pre-Game Huddle” during warm up.  These were objectives such as:  attack from wide positions, pressure-cover-balance defending, get the ball forward faster, always staying focused, receiving the ball with open hips, beating defenders with first touch, or changing the point of attack.  These objectives were linked to our prior practices for the week and sharing them with parents gave them something specific to look for and celebrate when they happened during the match.  It put the focus on the process of learning that was happening, instead of the score.

The Parents never lost confidence in me as a coach.  There were no complaints to the club directors and there were no conversations between me and parents that were stressful. I appreciated their trust in me, and told them that numerous times.

When you are playing against teams that are better than you each week, the losing can make a coach second guess themselves, and that insecurity can morph into a stressful environment quickly.  Thankfully, that didn’t happen because I never lost confidence in myself….and also because the parents were incredibly supportive of me.  I received many messages of encouragement from parents after games and each of those messages was greatly appreciated.

3.  Develop a Sense of Community

The parents on my team were incredibly intentional about developing a strong sense of community with the team and the result was a season the girls will always remember. The post-game Dairy Queen, the picnic between games at the tournament, the team COVID masks, countless cupcakes, and the Outdoor Firepit Party kept the season especially fun and enjoyable. These moments don’t happen naturally.  My team manager was exceptional and the other parents on the team rallied to support and join the fun.  We found safe ways to interact amongst COVID and therefore strong bonds were formed and friendships (between players and also between parents) were made.

4.  Control What You Can Control

When your child loses you have embrace the loss and focus on what you, as a parent, have control over.  Do you have control over the decisions your child or their teammates make on the field?  The referee?  The actions the coach is taking? No – but what you do have control over is how you handle yourself.  You can’t make excuses for your child in an effort to protect them.  You can’t try to soften a loss with a comment about how it doesn’t really matter. You can’t blame a referee or speak poorly about a teammates’ decision. Instead, you can focus on your personal response, your sideline behavior, and your post game interactions with your child, the other parents, and the coach.

I appreciated the dedication the parents demonstrated toward the team by getting their child to practices and games on time, rallying to plan and attend social events, always being encouraging from the sideline, and making sure their child arrived with a winning mentality fed by messages of encouragement and support from their parents.

5.  Be Optimistic in the Face of Defeat

Kids pick up cues from their parents on how to feel – and when a parent is upset after a loss, especially one to a better team, the messages can become very confusing for a child who can take these expressions as a personal attack. Let your child lead the way here.  If they are upset – ask them if they want to talk about it. If they are happy and ready for a Slurpee, get them one!

If they are open to talking after the game, some great questions to ask are:  How do you feel?  What did you learn today?  What was hard?  What was your favorite play you made?

Of course, I am not privy to how the parents on my team interacted with their child – but I do know I was greeting post game by smiling faces walking across the field toward me.  It was a great feeling, and I am sure the players felt the same emotion looking up and seeing their parents being so optimistic and supportive.

Because the parents on my team handled all the losses during league play with a fantastic attitude, the team was able to continue to learn and develop at maximum capacity.

The season wrapped up this past weekend with a local tournament in which we were placed in the perfect division with some great parity.  The girls were afforded a bit more time to make decisions against players who matched up well athletically to them, and they were amazing. They changed the point of attack, played incredible team defense, looked up and made decisions based on the defenders and the space, and worked hard for one another.  We won two games, tied two games, and finished second in the tournament.

The mission of Soccer Parenting is to Inspire Players by Empowering Parents and this mission – helping parents understand the power they have to inspire their child - was lived out each week with my team this season.

The tournament was a fantastic way to end a losing season that could have gone in so many negative directions, but because the parents focused on the process, trusted me, did fun things socially together, controlled their responses to losses, and remained optimistic - the season was able to finish on a high note!