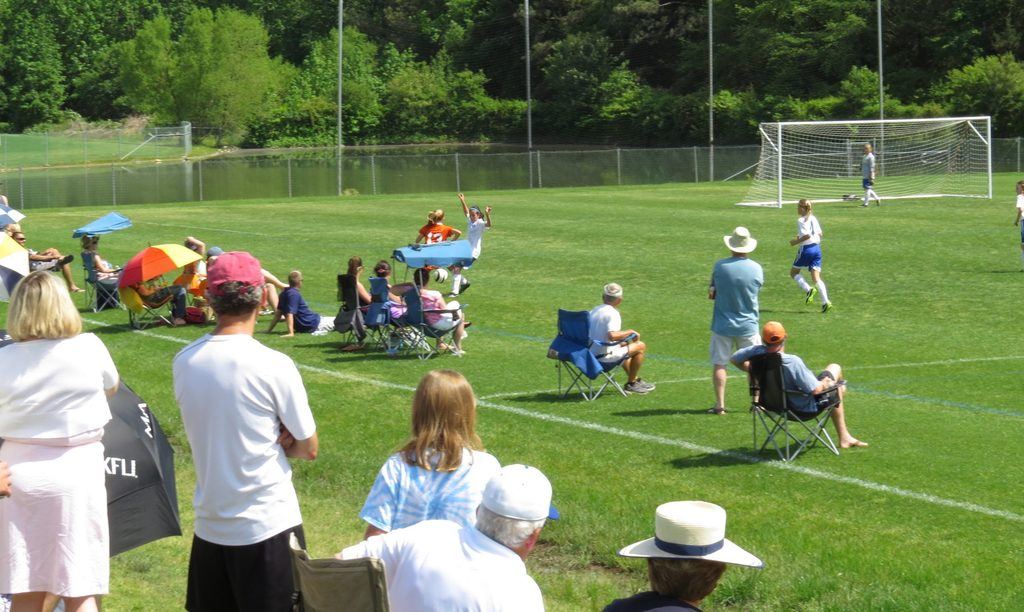 Gone are the relatively calm youth soccer games of last season where you sit comfortably in your chair and take in the “beautiful game” with your emotional scale running at close to 50% – not too up, not too down. Now, stress is looming. If you hear the Crazy Soccer Parent scream one more time to the ref, or pull some unsuspecting parent standing close to them into a conversation about what the coach is doing wrong tactically, you think you may, by mistake of course, pretend trip and pour your Starbucks down their back!

You can’t just sit there covering your ears.

It’s Time to Unite and Take Back the Sidelines, Parents!!! Here’s How:

1. Parents Unite! – Don’t Let them Have a Voice on the Team

This is an essential first step. I get it that you don’t want to be the gossip and start any major rifts between parents or come across like you are talking about someone behind their back. However, for the parents to Unite and be a voice of reason, you must start taking sides. Strength in numbers is how you unite.

Scenario 1. The Crazy Soccer Parent is standing with a group of parents and all the sudden starts talking about the tactical failures of the coach. Look sideways at a few of the other parents and give a little “he/she is making me insane” look with your eyes wide open and claim your side of the situation by walking away and bringing others along with you.

Scenario 2. Listening to the Crazy Soccer Parent in the distance while standing with some other parents? Something simple like: “This is going to be a long season having to listen to him/her all the time.” Or: “I think I may need to start standing down by the corner flag if this doesn’t stop” are usually good comments that get your point across to other parents. When you get a nod in return, you know they have joined the alliance.

This article takes a lighthearted approach to a very REAL PROBLEM. Crazy Soccer Parents are negatively affecting the culture for coaches, parents and players.

Learn more about how you can help via this link:

Parents are the Solution, Not the Problem: How to Fix Youth Soccer – Non-Crazy Soccer Parents Unite!

2. Avoid Being Near Them

In the chaos between games when the group of parents from the game before got up and out of the way and you put your chair down – did you lose track of your chair placement and mistakenly sit too close to the Crazy Soccer Parent? MOVE. Yep – It doesn’t matter how rude it seems. Take that chair of yours and plop it down in greener pastures. If that means you have to leave your favorite spot on the sidelines – so be it. You owe them absolutely no explanation. Just Move. Being within hearing distance of a crazy soccer parent is no way to spend your weekend.

Oh no, the Crazy Soccer Parent doesn’t sit down? They are the pacer on the sideline – walking behind everyone and poisoning anyone within earshot with their negative comments and screams? Bummer, that’s the worst. Solution – WALK AWAY. Literally – walk in the opposite direction of them…the entire game. The Crazy Soccer Parent must look up and realize they are talking to no one. No one can listen.

3. Make Sure the Coach is Aware of the Problem

If you have a Crazy Soccer Parent on the sidelines, chances are the coach is well aware of them. However, because of the distance between the bench and other sideline, the coach may not be aware of their sideline behavior during a game. It’s essential that you make the coach aware of it so it can be handled.

If it’s REALLY bad, encourage the coach to have a club administrator or Board Member come to a game to have a listen and step in if necessary.

4. Be Extra Nice to their Child

Obviously this goes without saying. The poor kid is already feeling horrible enough because they have a Crazy Soccer Parent to deal with. Take the rescuing approach. Yep, you read that right -Rescue the poor kid from the car ride home with a Crazy Soccer Parent!  If they are your child’s’ friend, invite them along for post-game Slurpees or ice cream. If it’s a long ride home after a game, invite them to hang with your child in your car and rejoice in a car filled with fun after a game instead of the potential play-by-play they have to deal with.

You can’t cross the line and talk to them about their parent, but you can model excellent behavior to give them a respite and a glimpse of a normal situation.

So the whole avoiding thing only goes so far. At some point – if they cross the line – you must be ready to stand up to them. What is crossing the line? It’s easy. The moment this Crazy Soccer Parent talks to or complains loudly about ANY child on the field that is not their own – on either team – they have crossed the line.

YOU MUST STAND UP TO THEM.

Talking to or about another child is absolutely not acceptable.

What do you say? It’s not like you are going to reform them right there and then. They will most likely have a retort and it will most likely be uncomfortable. But talking to or about another child on the field is absolutely not acceptable and they need to know it.

A simple statement, in conjunction with direct and possibly awkward eye contact is called for: “You can’t talk to the players on the field that are not your own.” And then, walk away….

6. The Power of Passive Aggressive Statements

Sadly, there is no helping a Crazy Soccer Parent in the moment. In my experience, what works best? Passive Aggressive Statements.

Here are some good ones:

“Man, I don’t know how you make it through a game, you are so stressed all the time.”

“Geez, I think I need to move away from you, I am rather sure one of the parents from the other team is about to come punch you in the face, and I don’t want to be in the middle of a fight.”

“If I yelled like that, my child would quit playing or insist I never come to another game.”

Fortunately, as more and more parents are being educated about the game and organizations like SoccerParenting.com are starting to make a difference by educating clubs, coaches and parents – the Crazy Soccer Parent is losing their voice.

Previous Post Parents are NOT the Problem, They are the Solution. How to Fix Youth Sports. Next Post 9 Ways for a Parent to Support the Youth Soccer Goalkeeper