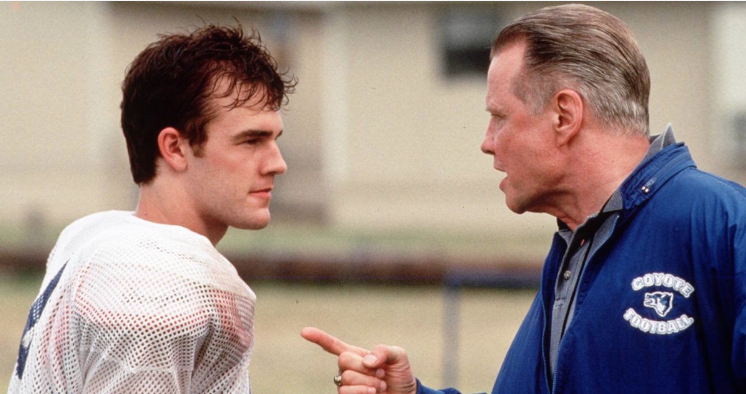 This is how the “winning” football coach at a small Texas town speaks to his players.  He demeans them, rules by fear, and everyone in town is thrilled because “he keeps winning.”  This is Bud Kilmer, the consummate coach that plays out on youth fields across the country.  This is Bud Kilmer.  People don’t respect him, but they fear him.  Players don’t play for him, they play to keep from feeling his wrath. This is Bud Kilmer.  He has become the yardstick against whom we judge results.  Youth sports believes, if you want wins, you may have to break a few eggs….

Bud Kilmer from Varsity Blues is just a character.  His words were part of a fictional script written by a team of talented wordsmiths.  The only way to make the movie sell was to write in an emotionally sterile tyrant of a coach who has a blatant disregard for the feelings of his players.

That kind of coach doesn’t exist in real life.

Coaches care for more than wins and money and fame, RIGHT?

There is no culture that holds up the nasty coaches as “tin pot dictators” who rule their teams and towns with iron fists, and razor sharp words that beat and slice submission out of their players.  Seriously, there cannot be these kind of men and women shaping the brains and the futures of our youth athletes.

We would never allow it.

Thank goodness for reality and the clear distinction of it from fiction.

We train our coaches to be better people for the sake of the kids and, as parents, we closely guard our children from such terrible behavior. We would not stand for it.  The role of a coach is far too important to allow this kind of behavior.  We certainly don’t celebrate it.

While we are on this topic, please tell me Dance Moms is fictional too.  We are an advanced species that cares for its young, not tosses them out into the wild to be verbally devoured by wolves in coach’s clothing. It’s just a faux-reality show scripted with paid actresses.

We can’t possible pay for and celebrate that kind of behavior toward our offspring.

When my friend called me to relay a story from a college showcase event a few months back, I was certain it was a scene from the Varsity Blues Sequel – “Coach Kilmer: Heart of Darkness”.

He said, “Reed, you are not going to believe this.  You have to hear what went down today in front of about 3 dozen college scouts/coaches.”

As his story unraveled, and I came to the harsh realization it was the truth, I couldn’t hold my rabid anger/surprise.  No one on earth would pay thousands of dollars for their child to be treated that way.  No way possible a coach would ever treat an athlete, especially a minor, in that way.  I call boulderdash. Coach Kilmer is a fictional beast that only appears in nightmares, right?

My friend assured me it was all true.

Here is the basic plot line of the story relayed to me by my friend.

What the hell is wrong with you? Are you stupid? Get your head out of your a@$ right now and start acting like you have a brain! You are a waste.

So there you have it.  The perfect storm for a teenage player.

Failure in front of peers, parents, and college scouts.

Lack of empathy or support from the coach.

A coach choosing the wrong words as weapons on this poor child.  That child’s courage to risk completely subdued, the creativity to try new things crushed, the quest for excellence blockaded.  Worse, humiliated in front of 3 dozen college scouts whose only frame of reference for that child are the words ‘stupid’ and ‘waste’.

Let that sink in for a moment.  Or watch an episode of Dance Moms. Then come back to me.

I followed up with that parent a few days later to see if anything had been done.  It turns out the sad truth is no.

Everyone went back to their lives like nothing happened.

No one spoke out publicly.

No one even reprimanded that coach.

In fact, from what I have been told, he was awarded two new teams of even younger players this fall season. No one held him accountable for his actions. Nobody did a thing.

Well, not quite true.  Someone did act on it. My friend pulled his child from that team and moved to a new club because he decided enough was enough. One parent can’t make a difference, though. The youth sports machine will keep humming along in his child’s absence.

…and I wrote a TEDx talk about what I have seen over the years.  So two people did something. One parent, and one guy with a microphone can’t make a difference, though.

If this were a teacher, a pediatrician, a social worker how would you have responded?  Would there have been public outrage? Would anyone have come to the rescue of that child? Of course.  We have every right to defend our children against those people.

Why is it different in youth sports? Why won’t we defend our children against the baseless tyranny of the Coach Kilmer club? Why do we think it is okay, or character building in sports, but not in any other arena?  Isn’t bullying simply bullying no matter the context, the outcome, the amount of money/time/energy spent? Bullying does irreversible damage, even if it is for the sake of a win or college scholarship.

7 Reasons we allow or celebrate bullying in youth sports:

We are so driven to have our children succeed.  They need to be on the best teams, play for the best clubs, get college scholarships, and succeed.  If we speak out, will that jeopardize their chances? I heard a youth sport coach once say ‘we are cutting that kid because his dad is too vocal about our coaching behaviors. We don’t need cancers telling us how to do our jobs.’ Whoops.  We won’t act because there is a definite reality of our child being punished for it. Even if we are within our rights, we don’t want to be seen as a cancer to the team or have our child be blacklisted.

​Over the course of a youth athlete’s career, parents pay the equivalent of college tuition for their children to have the very best coaching.  No way can we admit that we invested all that money and got sub optimal service.  I know I cannot admit being fleeced that badly.  I would never tell anyone I paid $30,000 for a car with no engine and no wheels.  I would keep that to myself.

We invested all that money in the hopes we may recover some of it if our kid gets a scholarship.  We have to stick it out now so we ensure there is something good that comes of this. I mean…scholarship, because there is no such thing as an academic scholarship, right?

This is an actual quote said to my wife when she asked a parent why they would pay for a coach that belittles children every game, “You would pay that kind of money for the results [that coach] gets.” Steroids get results too, but some of us would rather avoid the long term damage for the short term gain. Trophies collect dust on shelves. Were they really worth it?

We want the very best for them at all costs.  They beg us to play with their friends at the best club in town. Their friendship and happiness is far more important than their long term health.  Sometimes we are blinded by what we really want for our kids.  What they want is not always what is best for them.  My son wants gummy worms for every meal.  I think I better make this decision for him.

Sometimes we are just as afraid of our coaches as our children are.  I know I lived in fear for a couple of years.  I was frozen by what I witnessed in gyms, on ice rinks, on playing fields.  No words came out when I opened my mouth.

The movies tell us these kind of coaches get results.  They buoy entire Texas towns above the doldrums of life.  They bring revenue, prestige, and opportunity where desolation once held reign.  These coaches make something out of nothing, and in turn, they enhance our lives.  In the end, we will all be better off, the coach will come to realize the errors of his ways and repent, and we will all stroll off the field into the bright lights of the stadium, arm in arm, singing the theme from Varsity Blues.  It’s all good. Oh, except the psychological damage done to our kids.  It’s all good except that.

I am not without guilt, nor am I pointing the finger. Well, yes, I am. Someone needs to start speaking the truth. Might as well be me.  I am a big boy and can handle the backlash.

I can recall at least one coach along the way for each of my children that did vast damage and I stood by for one or even all seven of the above reasons. In fact, I have been coaching for 26 years now and guess what? I am just now sharing the road less traveled.  I thought “I am one person. No one wants to hear what I have to say so I will just keep doing my thing and let others do theirs.” For 26 years, I did my thing and never stood up for the rest of the children who should have had the same kind of great coaches I had when I was their age.

You and I together fighting the good fight.

Let’s start to ask ourselves and our coaches: “What’s Your Echo?”  What will be your lasting legacy when the game ends?”

I know I would rather be the first they thank than the first they blame twenty years from now.  Those echoes are always there.  Resonating deeply within their hearts and minds.  We are the ones who control what those echoes are.  We should all hold each other accountable for creating positive echoes.

Maybe I am the dumbest smart kid you know for taking up this banner and running into battle with it, but at least I hear the echoes of my coaches resonating. Driving me on to be the difference in the world.

About the Author Coach Reed

Coach Reed is the Chief Content Officer for Changing the Game Project. He believes sports should be a vehicle for developing life skills, building confidence, creating fun learning environments, and conveying character traits and values that allow children to succeed at whatever it is they choose to do in life. He is on a mission to make that happen. His book, "What's Your Echo" is due to be published soon.

Previous Post 9 Ways for a Parent to Support the Youth Soccer Goalkeeper Next Post Winning vs. Development with Terry Foley