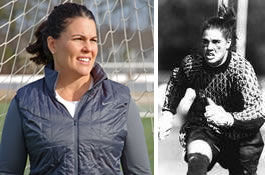 Interested in Skye speaking to your organization?  Learn more here

Born in 1971, the year before Title IX was passed, I am thankful to have grown up in progressive Reston, Virginia where I had opportunities to play from the age of 5, and a soccer playing older brother to emulate.

My experiences growing up in the game are a regular source of reflection for me as I share on SoccerParenting.com. My club teams, first the Reston Ramblers and then the Springfield Patriots, competed in the WAGS league and as a member of the Region 1 ODP Team and National Team Player Pool, I traveled much of the United States and Europe as a young player.

In additional to being a Youth All-American Soccer Player, I was also a multi-sport athlete as I competed in track and cross country (2 time Virginia State Champion in the 1000m).

I played college soccer for 4 years at the University of Massachusetts – redshirting my Junior Year due to injury. I graduated with a Sport Management Degree and transferred for my 5th year of eligibility to George Mason University.

The George Mason team experienced the season all athletes dream of. The team jelled into a seemingly unstoppable force where the belief we had in ourselves propelled us to seemingly unimaginable wins. We were the last team chosen for the NCAA tournament, a real underdog, and finished 2nd, losing to UNC in the National Championship Game. I was named Defensive MVP of the Final Four and named a First Team All American. (Should I also mention we lost 0-6 to UNC???)

Throughout and after college, I spent summers working for the No. 1 Goalkeeper Camps and SoccerPlus Goalkeeper School. These long summers on the road with a grueling daily schedule and non-stop soccer action – were some of my favorite times. Many of the expert contributors on SoccerParenting.com are connections I made through these camps (Tony DiCicco, John Cone, Lisa Cole, Kevin Hartman, and Jon Busch to name just a few).

Being Pre-WUSA and not on the Women's National Team, playing opportunities were limited. I played in Washington area men's leagues and travelled on weekends to Philadelphia to play for the Philadelphia Freedom. While I loved my Promotions job with Lanzera, an American Soccer Manufacturer, the playing bug could not be put to rest.

In 1997 I sold my car, put everything I owned in storage, and traveled to Northeast Italy and joined Tavagnacco Femminile of the Italian Women's League. My short time in Italy (due to visa issues) is a life-highlight. I was learning and training everyday as a professional athlete. I was living in the same hotel as many of the Udinese men's players, so I found myself in the middle of Serie A football!!! Transferred to a team in Germany (that could sort out my visa), I opted to return to the United States to pursue my coaching career full time.

I moved to Richmond to be the Assistant Coach at the University of Richmond where I also earned my MBA. Now a mom to Cali and Davis – I am on the Board of the Richmond Strikers Soccer Club – an ECNL and U.S. Soccer Academy Club affiliated with Richmond United – with over 3500 travel and recreational level players. I am an active youth coach, have my USSF "B" and National Goalkeeping Licenses and have had various opportunities to coach with U.S. Soccer at a U-14 National Team Camp and with U.S. Soccer Training Centers.

Youth Soccer Needs a Reality Check
What In the World Is A 6? U.S. Soccer Numbers – Explained
6 Reasons Parents Should NOT Watch Practice
Calling All Youth Soccer Clubs in the USA – An Open Letter from USWNT Legend Tiffeny Milbrett
“I Can Do Better!” Youth Soccer Referees Need Support – Not Harassment.
Webinar Recap: Fueling Young Athletes with Lindsay Hazard
The Sideline Project Course Now Available for All Sports
The Sideline Project: Improving the Game Day Experience for All
5 Steps to Make the New Sports Season a Success
Zero Minutes