Youth Soccer Needs a Reality Check
What In the World Is A 6? U.S. Soccer Numbers – Explained
Calling All Youth Soccer Clubs in the USA – An Open Letter from USWNT Legend Tiffeny Milbrett
6 Reasons Parents Should NOT Watch Practice
“I Can Do Better!” Youth Soccer Referees Need Support – Not Harassment.
When Optimism Prevails: The Silver Linings of COVID for Soccer in America
Susie Petruccelli on Raised a Warrior and the Female Soccer Experience
Webinar Announcement: Mutanda Kwesele on Social Change and Anti-Racism in Sport
Learn about Youth Development in Brazil – The Brazilian Way!
ISports Analysis’ SHOWCASE Makes Sending College Coaches Video Simple 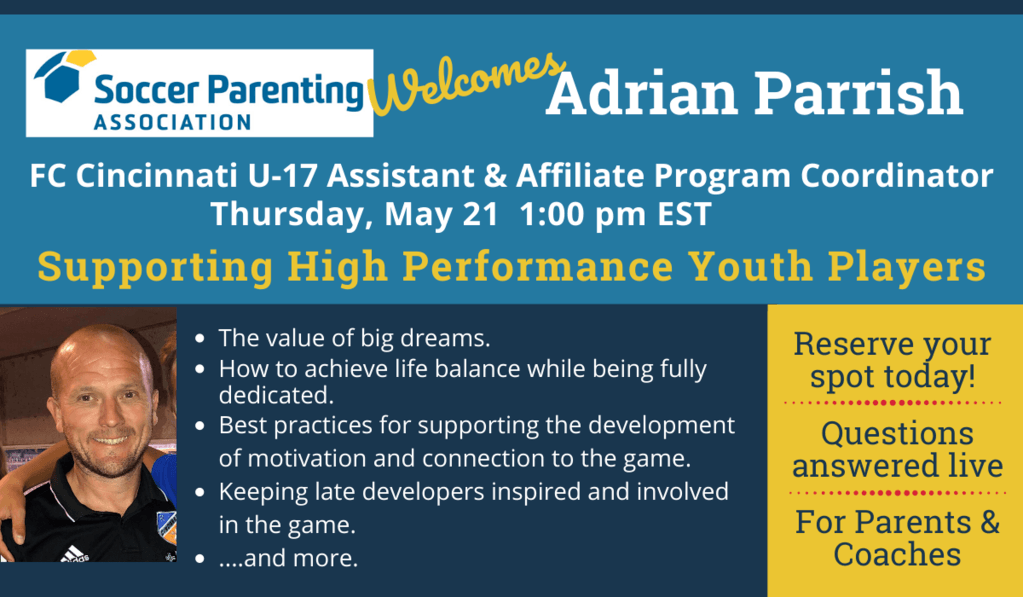 Adrian Parrish started at FC Cincinnati as the U17 Assistant Coach & Affiliate Program Coordinator, during the early stages at the club he has also set up Discovery Program to help find young talent to feed into the Academy. Holding a USSF “A” license and UEFA “B” license, prior to starting at FCC he served as technical director of the Kentucky Youth Soccer Association since 2005. While with the KYSA, Parrish ran the State Olympic Development Program, assisted youth clubs with development, designed programs to grow membership and created coaching curriculums, and served as the Coaching Chair for the Midwest Region.

Adrian was also the head coach for Cincinnati United Premier DA Under-13 team and has several years of experience of working with men’s and women’s amateur teams with the Kentucky Wanderers from 2006-10, which he led to USASA Finalist on two occasions and was asked to move the club under the USL umbrella.

He gained great experience working at the grassroots level when he was the director of coaching for the Amherst Soccer Association in upstate NY and also fund the time to be assistant men’s coach for Buffalo State University from 2003-05. A native of Louth, England, Parrish knew from a early age that he wanted to coach and  started his career as youth development officer with Grimsby Town Football Club in Cleethorpes, England, where he was on staff from 1996-2000.

Adrian also serves as a US Soccer National & Grassroots Instructor, but still says his most important job is raising his son Owen who is also a member of the FC Cincinnati family as a player on the U15 team.

When Optimism Prevails: The Silver Linings of COVID for Soccer in America