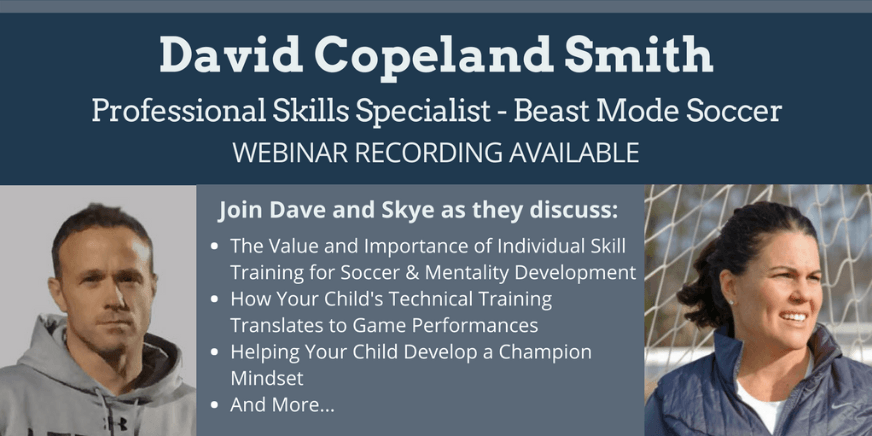 The positive feedback I have received from this month’s SoccerParentResourceCenter.com webinar with David Copeland Smith, the founder of Beast Mode Soccer, is a demonstration of the strong desire parents have for guidance in helping their child along their soccer playing pathway. You can watch the entire webinar recording with a membership at www.SoccerParentResourceCenter.com.

Dave has developed amazing programs for individual skills training with his BeastModeSoccer.com company and the results speak for themselves – as he has been a part of the soccer journey for thousands of young players, as well as many professional and national team players.

Our conversation along with many questions from parents spanned over an hour touching base on the value of individual skills training, the mentality that is required and learned from this independent training, advice for parents related to their child’s pathway and much more.

A team coach most often simply doesn’t have the time to put individual programs in place for their players, and valuable and limited team practice time should be spent predominantly on the game concepts, not individual skills.

So I’m curious, what do you perceive to be your role as a skills trainer versus a coach’s role as a team trainer? Break that down a little bit for us, and how they’re different.

So, it’s funny that I said this is like therapy, because sometimes I feel like a therapist as part of my role. I generally see my role as a guide. Because I’m not involved in any of the drama with club soccer, I can have a very unbiased opinion. So I can tell a kid what is genuinely gonna be the best option for them. But not just too – just technique.

The fact is — and some will argue — but if we’re realistic, coaches don’t have time to focus on the individual technical aspect of a player, and especially in the younger age groups — 8 to 12, 8 to 13 — because the fact is, monetarily, these coaches have to do two or three teams to make good money, to pay rent and to live a decent-ish life. So we’ll say there’s 15 players on each team. So that’s 45 players.

Can you really focus on 45 individual players, when everything they need to work on is different? It’s not a cookie-cutter system. It’s not reading from a book and learning. Each player has individual needs. Can you focus on that whilst educating the players tactically, focusing on the mental side of their game, giving them tips for the physical side, the social side? Can you do all of that? No.

Individual skills training isn’t something all players will want to do. Players with a high performance growth mindset will be most inclined to work independently, set micro goals for their overall development, and put the time in at home to reach these goals. I asked Dave for some suggestions on how to motivate young players to put in the individual time:

Skye, I knew and like… on my team, growing up, I knew I was nowhere near the best, right, and we just worked harder and worked harder until I was a little bit closer to the best. And we do live in this society where we’re kind of wrapping everything in cotton wool and trophies for everyone, and I feel like-

I can speak to that as a parent pretty clearly because my kids have a relatively … have developed, and we’re working hard to develop their growth mindset. So my daughter, at the age of eight, so she is now 17 and playing at a high level. But at the age of eight, for me to say, “Go out and juggle,” or “Go do this.” She would never want to do that because she, with a fixed mindset, didn’t connect that individual work to development. And feeling like, “Oh, I’m not really going to get any better anyway” was sort of her mindset.

So working on these little things and slowly building up with her has really taught her the value of, “If I do work on these things, I do have an outcome,” and those, obviously, those things translate to life. Side note: She can juggle the ball thousands of times now, and it just took time, though, as a parent.

I couldn’t push her on it when she was eight because she wasn’t ready. I had to find little things to work with her on to the point where another coach was that moment of inspiration for her, giving her one of those Brazilian juggling balls. She fell in love with it, and all of a sudden, she’s juggling the ball.

So what advice do you have for parents who maybe have children like mine who aren’t necessarily intrinsically motivated to get out there and train on their own?

As all, you can gamify it or bribe them to do it, but bribing’s never a good way, but you know-

I do have an article about “Should We Bribe our Children,” for those of you wondering. On the SoccerParentResourceCenter.com, one of the Ask the Expert questions about that.

I don’t think we should bribe, but gamifying it … It was a friend of mine who played at an extremely high level in England. His dads was like, “All right. You can’t come in until you beat your record” whether that was that one touch passes against the wall or a certain part of the wall, and it was never looked at as … It was more of a … made him more determined to do it.

It’s also important that parents don’t push it with their child and recognize that each player is on a different journey and that their individual player pathway is something the player must determine.

I interviewed Allistair McCaw last week. He wrote the book “Champion Minded.” We talked a lot about growth mindset. I just want to circle back to this concept because I know for a fact, because I experience this all the time, not just with my kids but in kids that I’m coaching, is that these programs will resonate with some kids’ parents but others, they won’t. If it does not resonate with your child … if they don’t want, after maybe a little bit of prodding and some gamification, as Dave mentioned, to get out there and do this training on their own, Dave, what is your advice for the parents?

Don’t push it so hard.

Honestly, because if I was ever pushed into anything as a child … piano lessons, all right?

Did you suffer through the misery of them?

I probably did that for six years, and I never passed my grade one. The grade one you can get to in six months. Six years. And in the end, the piano teacher looked at me, she went, “Just going to call your mum and tell her not to.” I hated it because I had to do it. I actually enjoyed the piano, but because I was forced to do it, I didn’t … do it. And I think it’s the same with soccer. Some of these kids, they’re just … they don’t want it that bad and it’s fine.

You need to allow your children to find their own pathway through this. We don’t know where they’re going to end up, and playing at a recreational level all the way through high school, maybe playing club in college, just kind of pick up or intramurals, and then maybe they’ll be a coach of their child and get inspired down the road. Who knows what’s going to happen? It’s just maintaining a connection (to the game) along this pathway. So for the parents that are listening who really, really want this stuff for their child but their children are not connecting with it, we really … you know, we can’t force it. We need to… find other moments of inspiration.

Not every player is the next big thing, and again, with your cell phones and social media, it almost seems like every day there’s another phenom. Right? Those phenoms very rarely work out. It’s okay if your player does not want to train every day.

If I Were to Write A Book: My Journey to Find Myself