In Celebration of My Son's Athletic Averageness 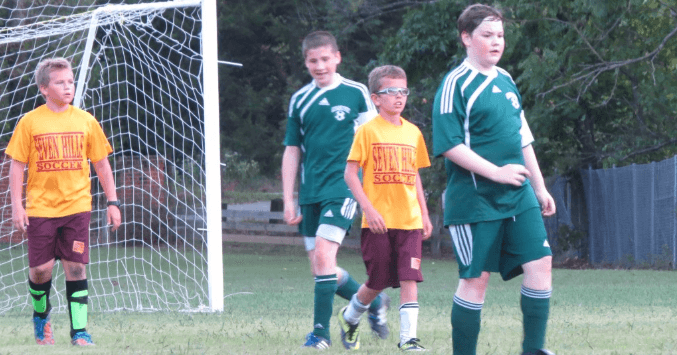 In Celebration of My Son Being Athletically Average

We know that children who participate in sport are establishing the foundation for a healthy adulthood, are less likely to use drugs and alcohol, and are more likely to go to and graduate from college.

However, by the age of 13, seventy five percent (75%!) of children drop out of organized sport.

Thankfully, my son is not one of them.

But he almost was.

I write a lot about my daughter on SoccerParenting.com as she is a top-level player participating in the ECNL. My son also plays soccer. The athletic genes didn’t find their way to him as they did his sister and, while he has played soccer since he was 5 years old, he remains an average player based on his average athleticism and his mentality towards sport.

Of course my son is above average in many ways – but when it comes to soccer, he falls on the average scale (and what’s wrong with average, anyway?).

As my son got older, I am shockingly embarrassed to admit that I started to think he should quit soccer. I wasn’t embracing his averageness and made the mistake of thinking because he wasn’t a gifted athlete he should stop playing.

What was wrong with me??

I spend my days writing and talking about the benefits of sport for our children, and yet I started to think that my own child should stop playing.

Why did I think my son should stop playing soccer?

1. Recreation soccer became dispiriting as the most athletic kids ended up on the same team and the parents (me included) started to feel some stress.

There was an obvious separation between the have’s and the have-not’s when it came to athleticism that resulted in a lack of parity amongst the recreational level teams. Some teams had been together for a many years and had encouraged their friends and the better players to sign up for their team – therefore a lot of our games were lost by more than 3 goals.

My son’s recreation team was made up of a handful of athletic kids who were new to the game and a bunch of average athletes who had never been asked to sign up for a specific team so therefore were randomly placed each season. It was hard for my son’s team to compete when it came to the score – and while this was disappointing for the kids – the sidelines became a mildly stressful place.

This is when the thought that maybe my son should quit soccer started to creep into my mind.

It was hard FOR ME to watch him lose all the time.   Not because I cared if he won or not, I definitely didn’t care about the results. It was hard for me because I wasn’t optimistically focusing on the fun he was having/could have. I think the attitudes of the parents (me included) – although generally positive, prevented the players from having as much fun as they could have had.

I was the coach of many of his teams, and in retrospect I wish I had pulled the parents aside after games and reminded them about how kids play to have fun and how we need to let them have fun, even when they lose, because what we ultimately seek for our children is for them to be active and healthy. I should have highlighted to the parents the progress the team was making and how proud I was of their efforts. Maybe those conversations would have eased the stress from the sidelines.

2. My son was not a highly engaged soccer player.

My son would not go outside and practice on his own. He couldn’t juggle the ball more than a handful of times. If it wasn’t a practice or game, he wasn’t interested in playing and he certainly wasn’t one to watch soccer on TV.

Seeing that he didn’t engage in soccer as his high performing, more athletic sister did – I started to think he should stop playing.

Was it important or necessary for him to practice extra, watch the Man United vs. Man City Derby with anticipation or set a new juggling record?

Given his level of play and his mentality towards soccer, all that was important was that he participate. As a parent, I needed to allow him to have fun by not expecting him to do more than he wanted.

So why did I surmise his lack of engagement was reason for him to hang up his boots?

3. The culture on the sidelines – parents took it too seriously

I will never, ever forget standing on the sidelines coaching the team and hearing a parent on the other side of the field say “Come On!” in a frustrated voice when my son couldn’t get his feet positioned properly to shoot on net and instead played the ball well wide of the goal.

If they do, could they subtly encourage their average children to stop playing sports – as a means of protecting them?

I think that is what I was attempting to do.

Thankfully my son ended up attending Seven Hills School in Richmond, VA a small, private middle school for boys beginning in fifth grade. If it weren’t for Seven Hills School making organized sports available for all their students, my son most likely would not have continued playing sports.

The school fields 2 soccer teams in both the fall and spring, 2 basketball teams in the winter, a running club and tennis program – all for 84 boys.

At Seven Hills School they more-often lose than win – however they almost always have huge smiles on their faces. They enthusiastically shake hands after games and they can’t wait to get out there and play again. Why? Because the focus of the games is on having fun, teamwork, development, being your personal best – not on winning. Of course they love to win, but more than that, they love to play.

The culture on the sidelines with the parents is one of respect. We respect our opponents, we respect the coaches and we respect the athletic traits of our sons and all the boys.

When I watch my son’s games now, I don’t find myself thinking about what position people should play in, the substitutions the coach is making, the performance of my son, if we scored or missed.

There is no stress.

Instead, I find myself smiling. Yes, that’s right. I sit on the sidelines with a smile on my face watching my son and his teammates become healthier right before my eyes. I smile as I watch them experience the pure joy that is uniquely found on a playing field with friends as they independently and collectively compete.

So – to the father who was frustrated with my son because he was too concerned with winning, I say: “Get over it. These are kids, this is recreational level soccer, and MY SON IS AVERAGE.”

I am grateful for many things on this special day, my son’s 13th birthday. Learning to embrace and celebrate him being athletically average is certainly one of them.

Post-Note from Author, December 2022 - My son played soccer all through High School, and is now playing intramural soccer in college with his fraternity.  Mission Accomplished.

Previous Post The Powerful Value of the Elusive Youth Soccer Report Card Next Post Are You Interfering with Your Child’s Youth Soccer Performance?