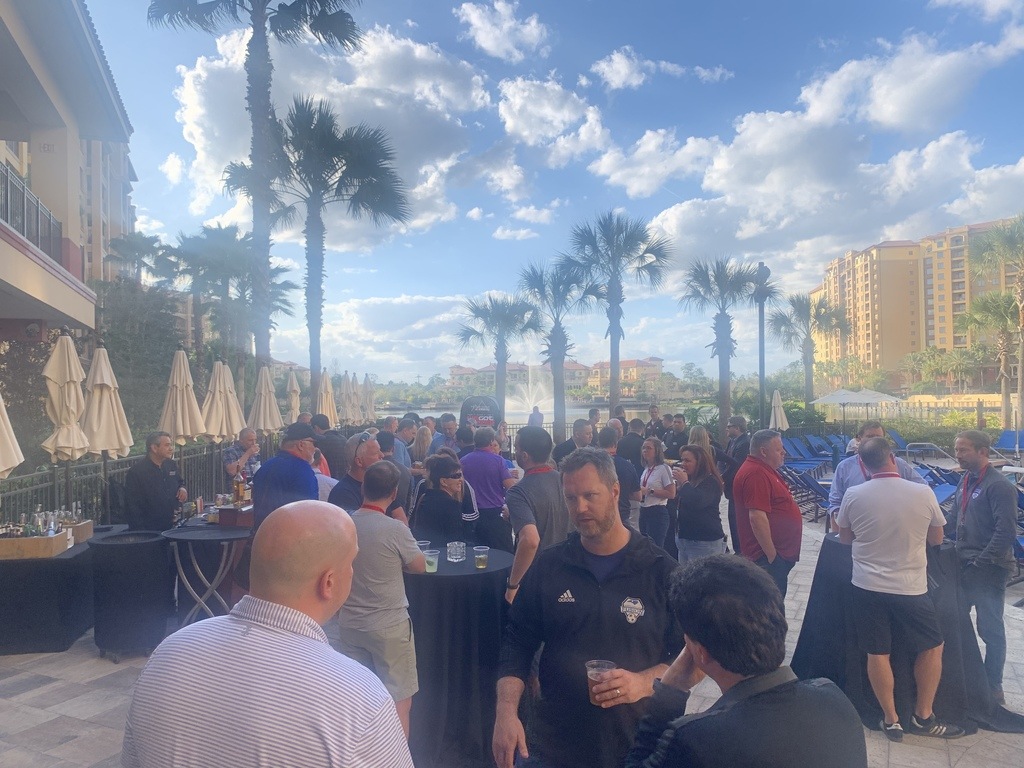 I spent Sunday to Tuesday of this week in Orlando at The Kwik Goal Club Summit – a gathering for youth soccer club administrators from across the country (and Canada) – learning and discussing best practices and ideas for tackling the host of challenges facing youth soccer clubs.

It was a fantastic three days!  I was honored to be asked to participate by speaking on Tuesday to a room full of eager club administrators about Managing Expectations for Parents and Coaches. It was a new topic for me and I put a lot of thought into how I wanted to put this forward.  Here is a picture of the white board I used as I started putting my ideas together for it. 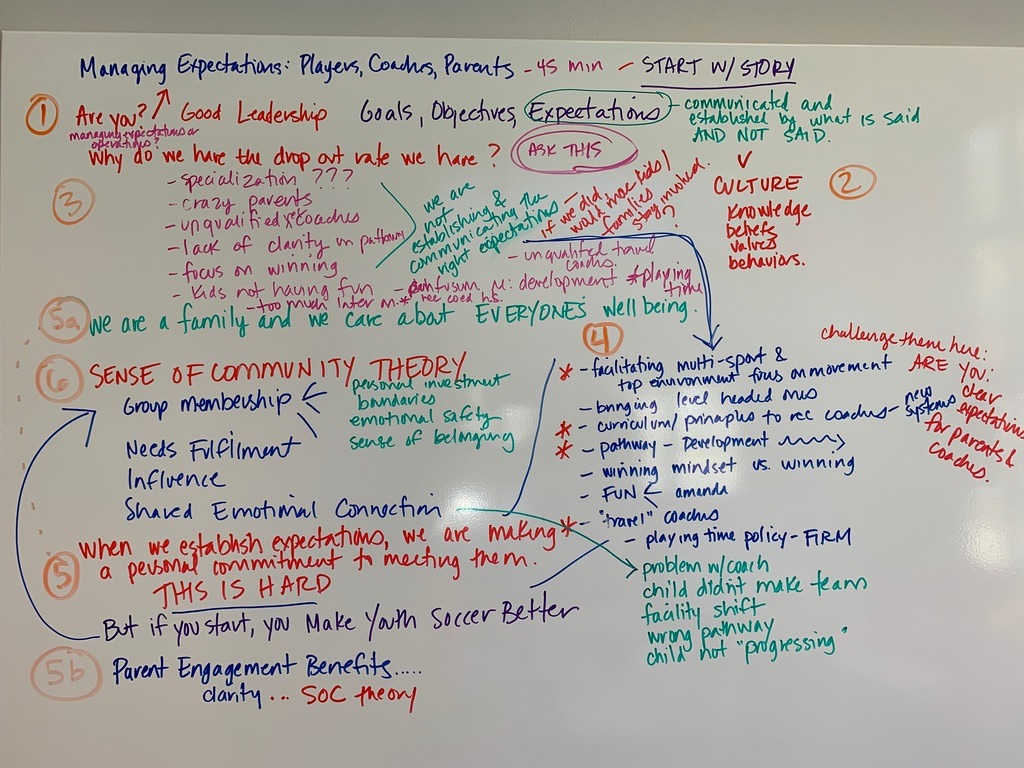 I was really happy with the finished product and I have to say, it ended up being one of the most favorite talks I’ve ever given! Speaking to a room full of strong influencers in the youth game really motivated me to make my calls to action very loud and clear while I helped them each understand what an important role they play in our youth landscape improving!

On the plane heading back to Richmond on Wednesday I jotted down 3 key points as I reflected on The Club Summit I’d like to share with you here:

This was actually my first slide in my presentation as I was telling a story about the Richmond Strikers and the significant club growth, trust building, and culture improvements that have happened in the past 6 years after we hired a new Executive Director, Jay Howell, and our Board leadership aligned around key common principles in terms of a strategic vision for the organization.

Our club leaders are influential, and as John O’Sullivan says:  Your influence is never neutral.

When I was speaking, I told the leaders in the room that they are the foundation of the change we need to see in our youth soccer landscape.  They are the decision makers, the strategy implementers, often the hiring and firing manager, and they hold tremendous power over the potential positive impact a sporting experience can have on a child and family.

2.  Club Executives are Evolving and Rising to the Challenge

As I sat in on presentations, talked to Summit participants over meals and drinks, and eavesdropped on conversations between club leaders, I was impressed by the level of engagement and distinct thirst for knowledge: eagerly sharing best practices and talking vulnerably about challenges they had faced or were committed to overcoming.

The role of the Club Executive is evolving.  When I was growing up club executives were largely men who were coaches, and found themselves managing more than a team as the club grew and expanded. These coaches turned club executives were typically not skilled for this type of management and our clubs were therefore not as professionally run as needed.

As our clubs have further expanded over the years, often an Executive Director has been hired. The Board, trying to bring in an outside person, has hired someone without a strong soccer background and suddenly a distinct separation occurred between the soccer coaching staff and the administrative staff.  This lack of oversight from Club Executives to the on-field soccer operations has not always been in the best interest of the club.

At The Club Summit I called on the Club Executives to hire strong leaders they trust on the soccer side. During my presentation I implored the Club Executives to see their role not merely as the manager of the operations of the club, but instead the developer of expectations for all members of the club (including coaches and parents) as their hold their staff to meeting these expectations and striving for excellence.

3. Collaboration is a Force Multiplier

I find myself using this quote a lot in my work with Soccer Parenting and I jotted it down a couple of times in my notebook on the plane ride home.  The energy in the room was often palpable as club leaders from all over the United States came together to make youth soccer better.  There was strong networking and ample opportunities for connection building during the Summit and the relationships formed will provide a strong base for keeping in touch.  It is important for our club executives to be able to pick up the phone and reach out to a colleague for advice or encouragement and these types of relationships were definitely formed!

As I said as I wrapped up my talk, Four Things I Know:  1. Our soccer landscape is improving, 2. Trust building is the foundation of the work we must do, 3. Self Trust is essential for real progress, and 4. I believe in the power of good people coming together.

The Summit was full of “good people” in the game coming together to Make Youth Soccer Better. It was truly a privilege to be able to meet and interact with so many strong and eager leaders, and an honor to be given the opportunity to speak to the group. 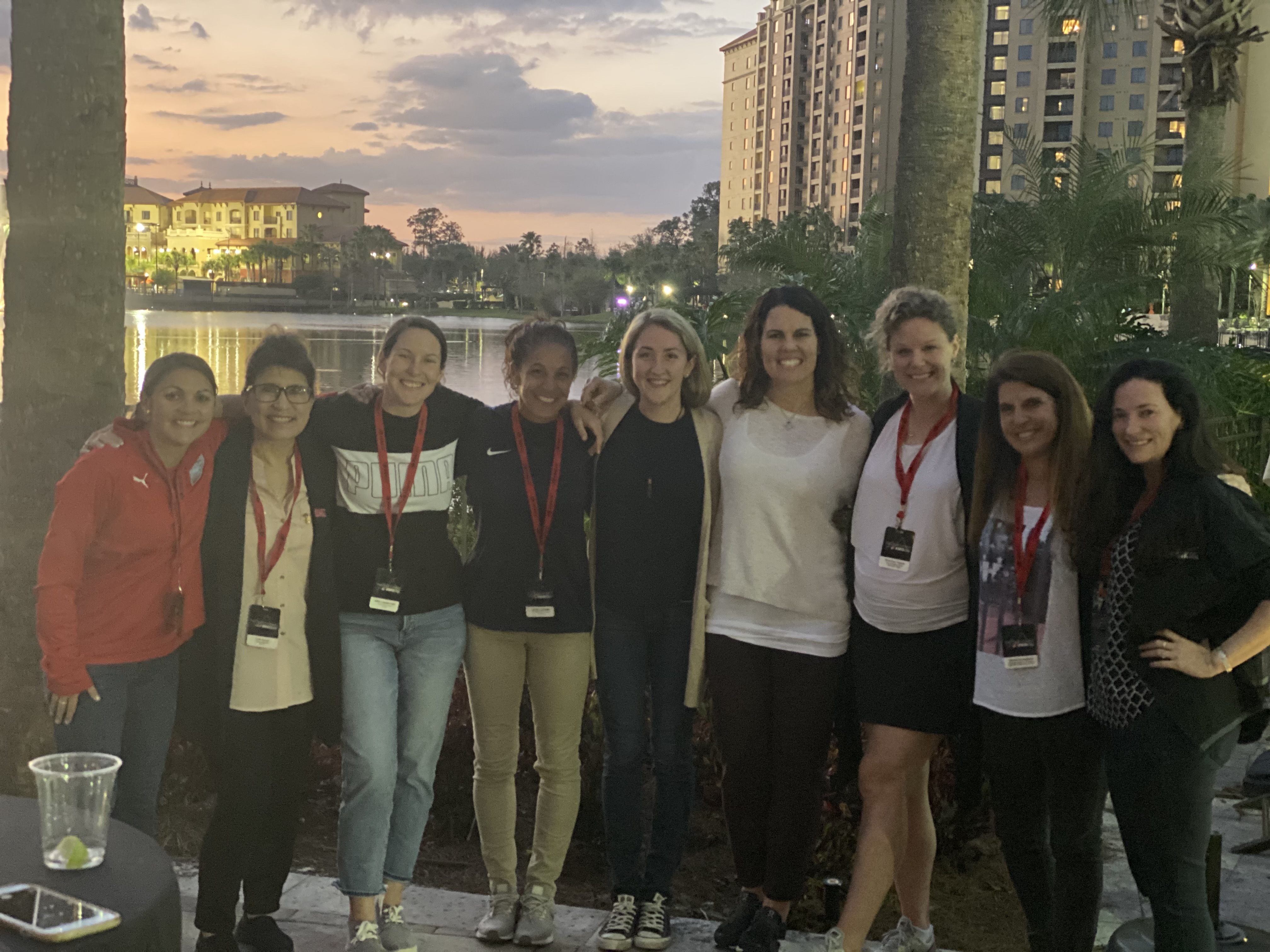 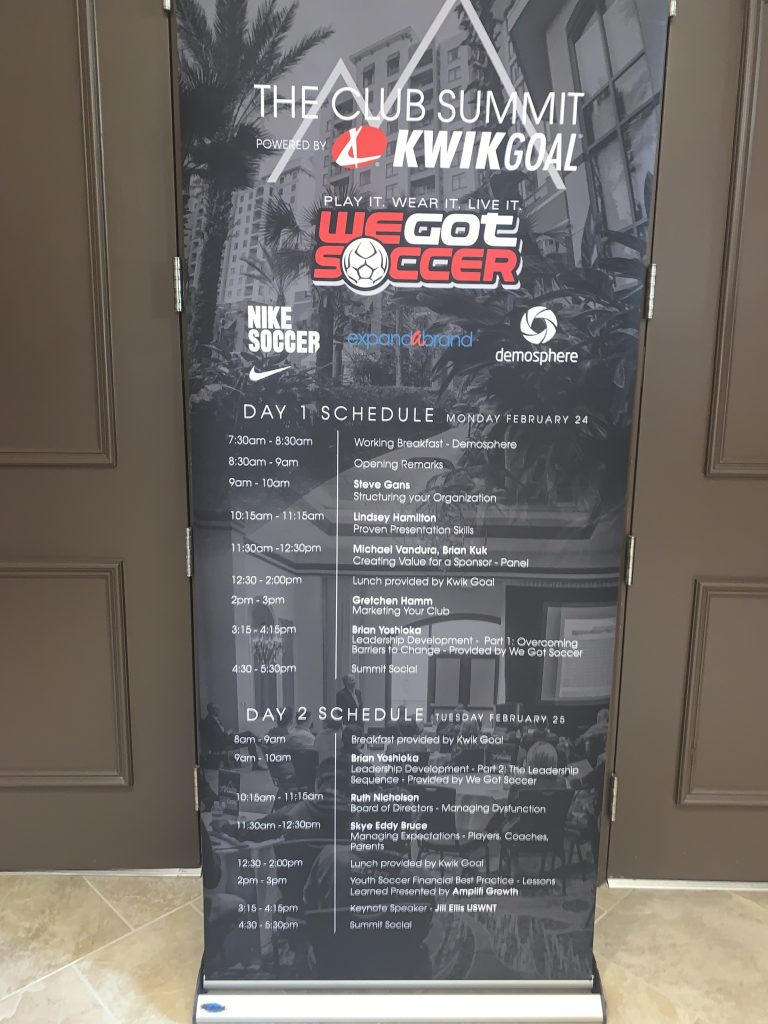 Previous Post Dr. Jerry Lynch on How We Should Make Our Children Feel Next Post Highlights from the Ian Barker Interview on Parents and the Youth Soccer Landscape