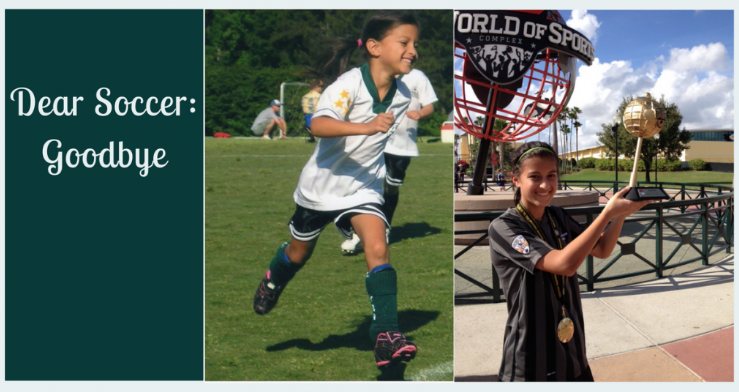 This week begins State Cup, Caroline’s last club soccer tournament ever. To mark the occasion, I have written an open letter to the game of soccer. Yes, it is long. But, I think other parents can relate, whether your child’s passion has been soccer, swimming, Science Olympiad, or something else…..

As our 11-year intense love-hate relationship comes to an end, I wanted to share a few thoughts with you…

Caroline first met you in 1st grade when her friends were playing and she asked if she could too. I said yes: fresh air, exercise, team sports, all good! I knew she’d play one or two seasons and then move on to the next activity.

Every time she had to choose between soccer and anything—you won. Loaded down with homework? Can’t skip practice. Friends planning a fun sleepover? Sorry – early game Saturday morning game. Friday night lights? We were on the road for our weekend games.

And, sometimes, I hated you for it.

There was so much more I hated you for! The daily laundry. The fields with no bathrooms. The unbearable smell of soccer cleats. The “I CAN’T FIND MY SOCCER SOCKS!” when we are running late. The crazy sports parents yelling at their kid like they were in the World Cup. The drama of tryout season.

Game times were so commonly freezing cold and wet or blazing hot. The 28 degree rainy December game in Raleigh. Not as bad however as the 110 degree games where girls were heat sick on the field. I know the weather isn’t your fault, Soccer, but I blame you anyway, because you should have the decency to shorten your seasons to fit within the nice weather months.

The constant black-and-blue marks covering a soccer player’s legs. Black eyes. Caroline’s broken nose. I hated you for the broken nose. The abuse you dealt to her teammates: the punch, the pulled hair, the sprained ankles, the torn ACLs, MCLs, PCLs requiring surgery and a year of rehab. I hate that soccer girls are experts in knee anatomy! The concussions. I hate you the most for the concussions.

One late Friday night somewhere in the middle of Alabama, I asked Caroline why we were risking our lives driving in the torrential rain to play soccer. She replied, “for these great memories”…
She is so right, we had a lot of great memories playing soccer!

You see, a funny thing happened while I was hating you.

I fell in love with you.

Caroline has made countless friends on the field, just as we have on the sidelines. Some friends will be lifelong friends and some we have already lost touch with – but we will always have fond memories.

I love you most for the friendships!

I love watching my daughter play a sport she loves. With passion.

I love the lessons you have taught.

How to lose a big game is a hard lesson. How to lose gracefully, even harder. How to win gracefully. Commitment. Discipline. Putting the team first ahead of yourself. Hard work. How to endure a nonstop-four-letter-word-filled-rant from a coach (and that was just from the games we won!). How to walk into each game full of confidence and absolutely fearless. (Well, I blame fearless for the broken nose so not completely thankful for that one.)

Watching the USWNT win the World Cup live in Vancouver was a once-in-a-lifetime patriotic experience that I will always treasure.

As much as I hate to admit it…I am probably going to miss you.

Previous Post Goalkeeper 101 – A Guide for Parenting a Youth Soccer Goalkeeper Next Post Dear Parents: 8 Ways to Get More Involved