Help Your Child Become A Student of the Game 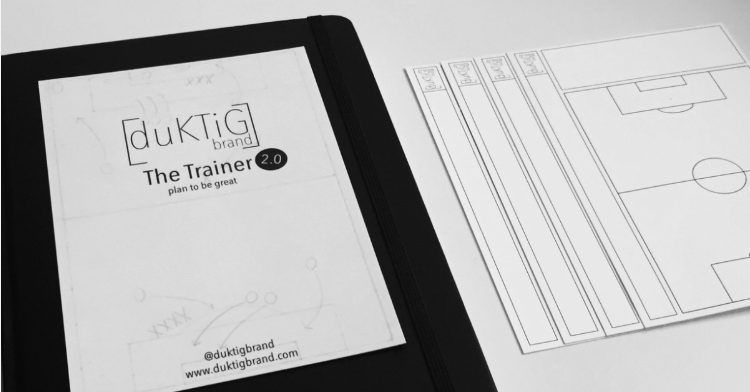 Help Your Child Become a Student of the Game!

When I was young, I wrote down that I wanted to be a professional soccer player everywhere I could. I didn’t even know what that entailed, but I knew I wanted to be it. I practiced everything from shooting to dribbling and passing; watched games on TV and analyzed every inch of everything Brazilian and Dutch players were doing; I wanted to be them.

During this process I learned that there is something very powerful about writing things down. I don’t know if it makes it more real or if it forces us to be accountable, but something happens when the words in our mind manifest themselves onto a piece of paper and then again into real life. It helps build belief.

Earlier this year, Adelaide Gay and I started a company called Duktig Brand with two goals in mind: 1. To help coaches to be more organized and professional and 2. To help encourage players to be more mindful students of the game.

Our flagship product, the Trainer, is a soccer planner that we have wanted since we were young. We just couldn’t seem to find a notebook that fulfilled our needs as players or coaches, so we decided to make it ourselves.

Adelaide was very similar to me when she was growing up (now a 5-year pro). She had coaches who insisted that she write down her goals, and reflect on her training and games. She took notes on sessions so she could do the drills on her own, and she wrote down every goal (she’s a goalkeeper) that was scored on her so she wouldn’t make the same mistake again.

Between the two of us and countless players we’ve talked to, we’ve come up with different ways the Trainer can be useful to players of all ages.

For the youngest ages, when players are still learning the basics of reading and writing, the Trainer can serve as a place to keep their juggling record and write down their favorite players, things they can work on to get better, or what they did in training. When I coached at a club in Connecticut, I had players of all ages submit game analysis reports. I was more concerned with the fact that they were watching the game and THINKING about the game than what they were writing. But they did analyze games pretty well for their age. Parents can also write their schedule in the calendar section so they can see what they have each day and how to plan their extra training. This age group can advance to writing down longer term goals, plugging their own schedule into the calendar and planning their own times to do extra. Players are also old enough to reflect on training and games, write down what they need to work on and,

equally importantly, what they did well. Ideally they should be watching games on TV because they enjoy watching soccer, but these are the ages where they can really begin to understand the tactics involved and can take notes on things that they want to emulate.

This is a stressful age. Players are figuring out who they want to be and a lot of that angst is centered around where they will go to college. The Trainer is a great tool to use when navigating the college process. But more importantly, the Trainer can help keep kids focused on the things that they can control. It’s easy to get consumed with college and forget to continue developing and enjoying the game every day.

College is an adjustment. There is so much that is new and plenty of distractions. The Trainer is a great place to take notes during team meetings, and when watching video. Training on your own never stops, no matter how old you get. But it’s even more important in college, where there are specific times of the year when the team is not allowed to practice. The college season is three months long. What a player does outside that time is VERY important! The calendar is a must for college players and time management.

Hopefully by the time a player goes pro they have developed a lot of the habits that will make them successful. But the development cannot stop there. Going from college to the pros is a large leap. It’s a longer season at a higher level with players that have been playing ten years longer at a much higher level. The Trainer is something we both use as pro players to manage our schedules and our bodies to look for patterns in performance and how we feel. We set goals (daily, weekly, monthly, yearly, reflect on performances and watch film using the Trainer.

At the end of the day, it’s rare for your child’s club, HS or college coach (or coach at any level) to give your child everything they need. In fact, I would put money that most players are not getting even half of what they need from their current coach.

When it comes to position specific training, analyzing games, setting goals, evaluating strengths and weaknesses, and navigating the HS/club/ODP process, the college process, and the pro soccer process, a lot of kids and parents are left to their own accord. From a coach’s point of view, it’s very hard to coach outside the lines of the field, even though that is where a huge amount of a player’s

development occurs. Outside of the 1 to 10 hours that a coach gets with a player, they have little control. It’s hard to have an impact on what a player eats, how much they sleep, and whether they take the time to train on

their own. A coach can suggest watching games, but they can’t be there looking over the player’s shoulder. And while parents might have a little more control over these things, you can’t be watching every minute either. Nor should you!

A player needs to be self-motivated. No one can do the work for them. All a coach or parent can do is give a player the tools to be self-sufficient and point them in the right direction. And that’s where writing things down comes in. Kids don’t do their schoolwork in their heads. They write it down. Soccer should be no different.

Shop for a Duktig Trainer

About the Author Tiffany Weimer

Tiffany Weimer grew up in Connecticut where she earned herself the opportunity to play soccer for Penn State University. She holds the Big Ten all-time goals record (91) and was a 2x runner up for the Hermann Trophy. Going into her 11th professional season, Tiffany has played in the US, Brazil, Sweden, Finland, Denmark and Canada, and has had a handful of call-ups to the US U21 and senior women’s national teams. She is currently playing for the Boston Breakers in the National Women’s Soccer League. While playing, she started a women’s soccer magazine, a youth soccer club, and most recently founded Duktig Brand to help elevate the level of preparedness of coaches and players.

I Like You As You Are – Feedback For Our Children