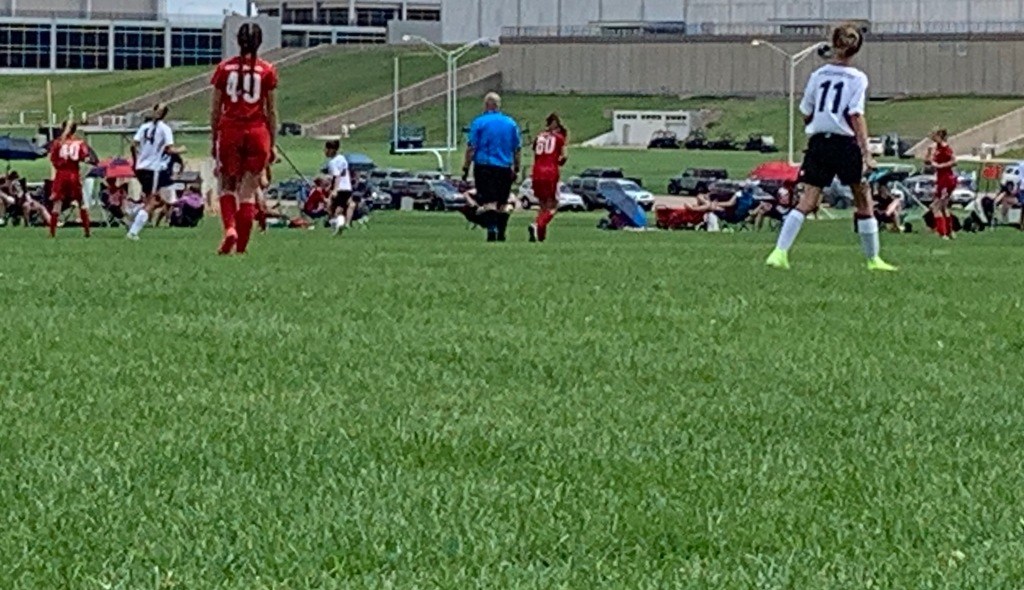 This article was written by Lauren Sainz, the blogger behind Life Spark with Lauren

This March, my nine-year-old daughter started playing soccer for the first time.

After watching my son play in the fall, she asked if we could sign her up for the spring season. Turns out, she's a natural athlete, unafraid to hustle, fall down, and get right back up.

Off the field, she's bouncy, carefree, and super silly.

And, deep down, she's a softy.

Starting in her toddler years, I learned that she needed to be hugged and consoled more often than her brother. Sometimes, all I need to do is hug her, without speaking a word, and her meltdowns stop.

After the month-long rec season ended, she was invited to play for a more advanced team, the focus being on building individual skills.

In April, her academy soccer team played in an overnight tournament. The kids and I booked a hotel for two nights and braved the event without my husband (he was a few weeks into a new job after a five-week layoff and couldn't ask for time off).

Two of the games started at 8 am, ya'll.

Three minutes into the first game, the opposing team scored three goals. That's when her coach, who had been standing and shouting, sat down on the bench, leaned forward, rested an elbow on her knee, and cupped her chin in her hand.

At that moment, I knew that I'd need to do some serious damage control when the game was over.

They lost that game - by like eleven to one (honestly, I lost count).

Thinking back to my own sporting years, I had a feeling of what would come next. I didn't agree that it should since her team is supposed to be non-competitive, but based on the coach's demeanor, I just knew in my heart what was coming.

She made them run suicides when the game ended.

I had the entire game to mentally prepare for how my daughter would be afterward. I threatened my son through gritted teeth not to say a single freakin' word to his sister. Not. A. Word.

When I felt like their huddle was lingering too long, I walked over, hearing the tail end of the coach's spiel. As I expected, her coach wasn't happy.

Once she released the players (after stressing to them to return a full hour and fifteen minutes before the start of their next game), my daughter turned and walked over to me. Holding back tears, her voice cracked as she told me they lost. Embracing her, I assured her that she played well and I reminded her that she still had another game to play.

I knew that she felt horrible about a few moments near the end when her coach moved her to be the goalkeeper. It sent me into a panic because 1) she wears glasses I feared might break, and 2) I didn’t want her to get hurt. Thankfully, she was put back as a field player a few minutes later, but not before making a few rookie mistakes, including walking outside the penalty area with the ball in her hands.

The following day, she made several more mistakes, including an accidental hand-ball and two off-sides calls (when she played forward).

One of the other mothers said to me that learning off-sides is the hardest part of soccer.

I don't know if that's true because I've never played and the soccer rules are all new to me (even though I used to watch my husband play when we were in high school).

After the off-sides play, I heard the coach shouting at my daughter from the sides, telling her she has to pay attention to where the defense is. I'm sure my daughter already felt bad enough, and the head ref already had a talk with her to explain it, so it wasn't helpful by that point that she was being scolded by the coach.

My son's response to what happened: "The coach should've just been happy that she even tried to score a goal."

My son was right. My daughter was the only player to make it that close to the goal.

But, I'm not writing this post to be a mama bear and complain that my daughter was wronged, or cheated, or even to criticize her coach.

The point I wanted to make is this: as important as the coach is to the team, as her parent, I also play an important role.

My job is to help her navigate the emotional, muddy waters that will surface when she makes a mistake, or when her team faces a tough loss.

It's my job to console her, listen to her anxieties, comfort her, and be there for her when she needs a hug.

I'm that person she can be most vulnerable around. I'm her safe place.

That weekend, I was that for her.

While she held it together in front of her teammates, she cried as soon as she saw me. I allowed her the space to cry. I didn't tell her to stop. I encouraged her to let it out. Kids need to be taught that, sometimes, the only thing that will make you feel better is a good cry.

I don't want my daughter to grow up and feel like she has to just tolerate the bad days. And losing a soccer game is the perfect opportunity to teach her how to respond to the bad days of life.

It's my job to teach her that she doesn't have to allow a bad game to ruin the rest of her day.

Admittedly, I wasn't sure if she would bounce back from the loss.

When faced with everyday things, she's typically resilient to return to her normal mood.

And facing this loss was no different - by the time we made it back to our hotel room (a roughly 15 minutes drive), she was my normal, silly, little girl again.

About the Author Lauren Sainz

Lauren Sainz is a thirty-something year old stay-at-home mom of four and blogger at Life Spark with Lauren. She hopes to positively impact other stay-at-home moms by writing and sharing her own stories of overcoming stressful momlife moments.