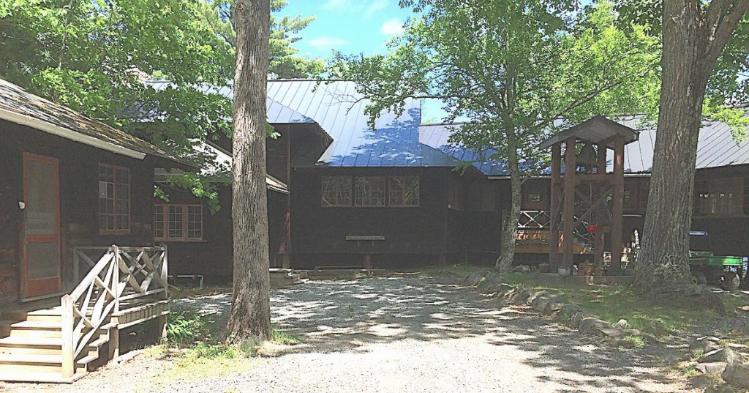 In late June I drove from Virginia to drop my son and daughter off for 5 weeks of summer camp on Lake Megunticook in Hope, Maine! Camp Bishopswood is the same camp my brother and I grew up attending. It’s a magical place with just over 100 campers each week, ensuring a strong, tight-knit community. Electronics, social media, phones and everything of that sort was removed from their lives (though they managed to keep their SnapChat streaks alive with the help of some friends!).

My children just returned home after living in rustic cabins and spending their time swimming, canoeing, hiking, playing various games on the sports fields, making friendship bracelets and a multitude of other crafts in the Art Barn, sailing, performing skits in the Great Hall, learning about nature in Camp Craft and much, much more. My 16-year old daughter, Cali, was a Counselor in Training (CIT) this summer after spending the past 7 summers as a camper, so she also walked away with important lessons in leadership, responsibility and communication.

You see, according to the path most young players who dream of playing college soccer are on, her summer should have been spent attending college ID camps, hitting the gym, and playing in a summer league. In fact, for many of her teammates, that was the case.

I was stressed because I know that by choosing to be a CIT, she would miss opportunities to develop as a player and be seen by college programs. In fact, one of the schools that had been recruiting her suggested she instead look into Division 3 College soccer programs when they heard of her decision to attend summer camp. Clearly, (I assume) they surmised, she isn’t serious enough about soccer.

On our way to camp, we visited two of the colleges my daughter is interested in potentially attending. I was thrilled when both of the college coaches probed for more information about Camp Bishopswood. I was appreciative of the fact that they were also genuinely excited for the adventure she had ahead.

One of the coaches said:

You know this is an unusual thing for you to do, right? I mean, most of the athletes we are recruiting are spending all summer playing soccer. Don’t get me wrong, I think it’s great you are doing this – it’s just a different path.”

Such a refreshing thought.

I loved my daughter’s response to the coach:

Well, it’s just 5 weeks and it’s not like I sit around all day. I’m super active at camp. And, having a break from soccer is a good thing for me. When I come home from camp I am excited for the season that is just about to start.”

Of course, attending summer camp is not the right decision for everyone, nor is it possible given competition and tournament schedules – but I am proud of Cali for realizing and acknowledging it’s the right decision, the right path, for her.

Her love of the camp community and experience is stronger than her fear of missing out when it comes to soccer.

Fear Of Missing Out (FOMO) can too often control our children’s youth soccer experiences and being aware of how FOMO can affect our decisions is essential. When I was feeling a bit stressed about her going to Camp Bishopswood instead of going to college ID camps, I was experiencing FOMO.

John O’Sullivan, Founder of the Changing the Game Project wrote about FOMO – “Is Fear of Missing Out Ruining Youth Sports?”

In his article John states:

FOMO is one of the primary drivers creating a toxic youth sports atmosphere and making so many children walk away from sports far too soon…As parents, we love our kids and we have great intentions, but FOMO causes us to focus only on the present, and not the long term.”

Too often in youth soccer our kids are herded down the same pathway and when they diverge from this pathway to a different one, the Fear Of Missing Out kicks in.

We have thoughts such as:

If my son opts to play basketball this winter instead of futsal he won’t develop the skills he needs.

If my daughter doesn’t make the top team and get the best coach, she will fall behind.

If my son opts to forgo the Developmental Academy and instead play on a less competitive team because he wants to be allowed to play high school soccer, he won’t get a scholarship to college.

Is there really only one pathway? No, absolutely not.

As parents, we must allow and encourage our children to walk the pathway that works for them.

Maybe that means encouraging your 12-year old to keep playing a second sport he loves.

Maybe that means being okay with your daughter not playing a season of soccer because she is getting a bit burned out.

Maybe that means your 9-year old playing three sports instead of focusing just on one.

Maybe that means your 11-year old playing only soccer and futsal year round.

We can’t predict where our children will end up. We shouldn’t encourage them down a pathway they don’t want to be on, or that doesn’t feel instinctively right to us as a parent, and expect them to be happy with where the end up.

What we can do is allow them to find their own pathway, not force them down the path most travelled if it appears they don’t want to go that way.

What we can do is open doors to new and different pathways for our children to follow if our parenting instincts are telling us there’s a better way.

Did my daughter miss opportunities to develop as a player and be seen by college programs this summer while she was experiencing her time “off the grid”?

I’m proud of her for not letting her fear of missing these opportunities hold her back from the tremendous and unique experiences she had being a CIT at camp.

Tonight’s practice marks the beginning of a busy 10 months of soccer and she is renewed, focused, full of excitement, ready to compete and most importantly – full of a love of the game that she will take with her down whatever path she chooses.