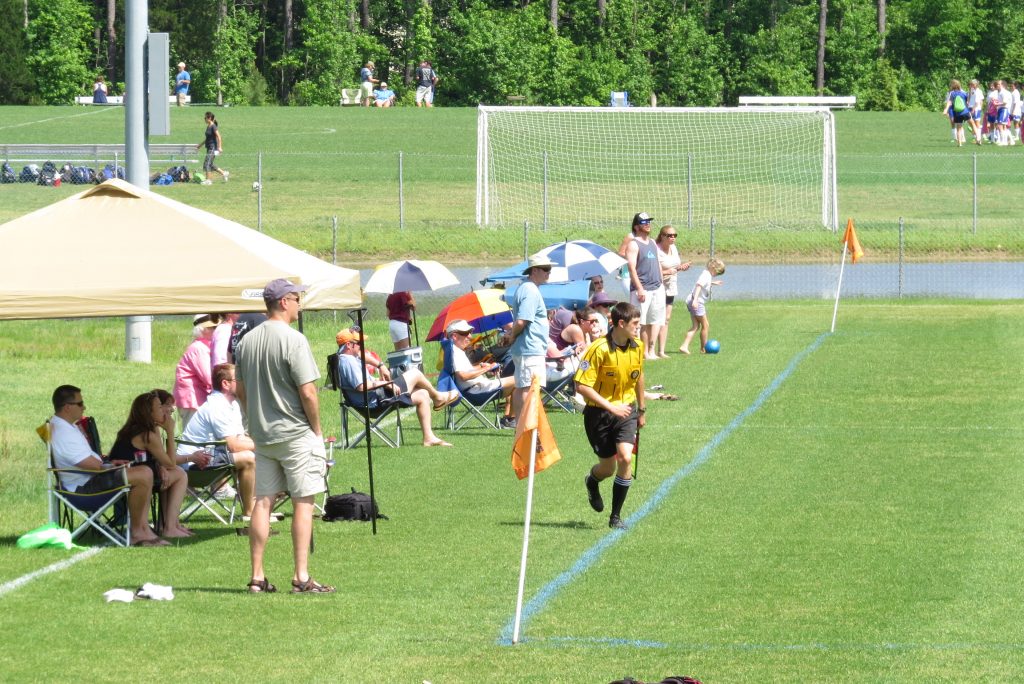 On January 12, 2020, at the Albion Development Showcase tournament in Temecula, California, two BU11 teams (Albion SC and InterAmerica [Azteca]) were in the finals of their bracket.  The game was reportedly heatedly with a few yellow cards being handed out (including allegedly at least one to a coach).  At one point it has been reported there was some scuffling on the field between the players, and then a teenaged sibling of one of the players ran onto the field and allegedly assailed a player.  From there, the situation escalated into a brawl between parents, and it has been claimed that at some point one of the adults was threatening to use a firearm supposedly hidden in a backpack.  The situation caused a mass flight of players and spectators from the field and surrounding fields, with many children separated from the adults and worried that there was an active shooter situation in progress.  While no gun has been found at the scene, there have been many reports of children who have been emotionally traumatized by the incident after being forced to flee unescorted into parking lots and over chain-linked fences.

Unfortunately, this is the state of youth soccer in the United States.  What will it take for us to recognize that our sidelines are out of control?  Fortunately, no one was shot, but one can imagine if the situation continues unchecked, next time we might not be as fortunate.

CalSouth, the governing body for soccer in southern California, to its credit, has announced some interim steps.  Most immediately, CalSouth suspended the teams, coaches, players, administrators, and spectators involved in the incident pending a CalSouth investigation.   The suspension includes a suspension from participation in the State Cup and in CalSouth affiliated events such as tournaments.  CalSouth upon completion of its investigation will adjudicate final consequences, but has threatened further suspension and deregistration if the teams fail to cooperate.

Given that State Cup is underway, CalSouth announced several other interim steps including: enhanced security at State and National Cup events, an increased presence of CalSouth personnel at such events, and spot auditing of conformity to CalSouth safety and sportsmanship policies, requiring coaches and referees before games to conduct an informal meet and greet, and separating spectators into different “home” and “away” sidelines.

CalSouth, to its credit, has taken these interim fixes, which are obvious and long overdue.  But they’ve also announced that they’ll be looking at the issue long term.  Additionally, the US Soccer Development Task Force, Referee Subcommittee, has been looking at the issue of sideline behavior and is due to issue recommendations, hopefully taking into account what happened at Albion.

I’ve worn many hats during my son’s soccer career.  As a referee, I’ve been yelled at by coaches and parents on the sideline.  There was one incident even during League Cup when I was yelled at and mocked by a coach when I had volunteered (without pay) to assist as an AR when their referee did not show up.  As a parent, I’ve witnessed referees who might be incompetent, don’t care enough to protect the players, or who believe that the call of fouls, even violent non-shoulder to shoulder fouls, should be minimized because we should “let ‘em play”.  I’ve witnessed my goalkeeper son lying on the ground after a save being kicked several times and a referee did nothing to intervene, during a game filled with many uncalled aggressive pushing fouls.  And as a coach and goalkeeper coach, I’ve seen first-hand the crazy win-obsessed parents, the idiotic calls by some referees, and the difficulty of the politics that come with trying to manage those parents.  Don’t get me wrong.  I think the majority of referees, parents and coaches at least try to do a good job.  But the various hats I’ve worn have convinced me that we have a multifaceted problem where several pillars contribute to the sideline mess, and no one can really escape blame.

I’m not saying that the crazy sidelines directly caused the incident at the Albion Development Showcase.  That responsibility lies with individuals who chose to behave poorly in the moment.  But I do believe the sideline situation has made incidents like Albion more likely and has created the explosive environment that made the incident possible.  So, to that end, here are some steps that I believe US Soccer and/or CalSouth should take immediately:

The incident at the Albion Development Showcase should serve as a wake up call to all of us, and spur the applicable authorities into immediate action.  More so, because it’s been followed by an incident on February 2, 2020 in Cape Coral, Florida, where at a U14 match the sidelines allegedly started yelling at each other and two parents got into a brawl after a referee instructed one of the players to remove her earrings after a game had started.

When are we going to say that enough is enough?  If the situation on our sidelines continues unchecked, it’s only a matter of time before something very serious happens, and this time officials won’t be able to claim they didn’t know it could happen.

Previous Post Gratitude Matters with Richard Shorter Next Post Dr. Jerry Lynch on How We Should Make Our Children Feel