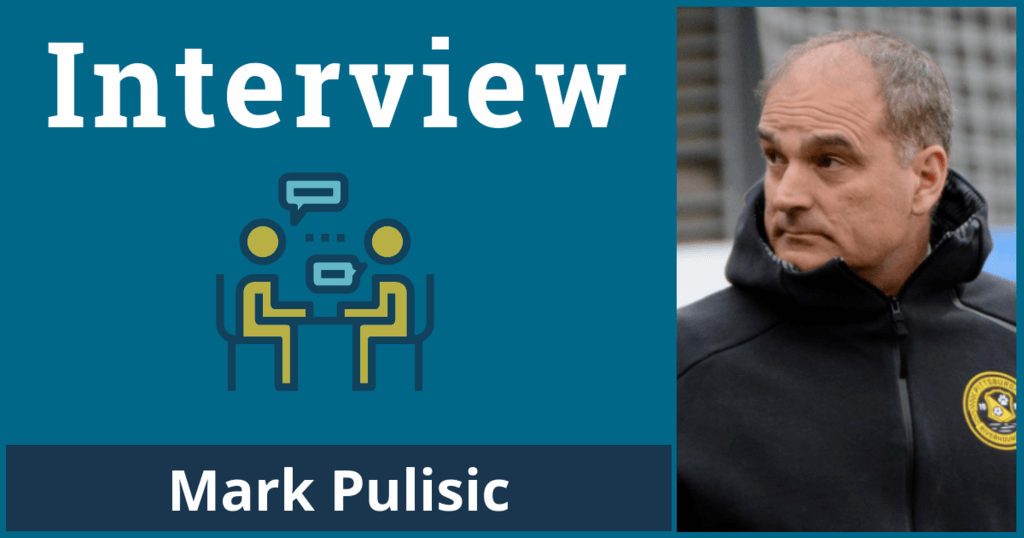 We had a record turnout this week for our Mark Pulisic webinar - thanks to all who were able to attend. I wish I would have had time to get to all the questions you asked -and for those who had lingering questions, be sure to catch up with Mark at MarkPulisic.com.

I loved talking to Mark about raising Christian and decisions he and Kelley made along the way related to his playing environments. Below are two clips from the interview - and the entire interview is available at our Parent Education and Engagement Platform - the SoccerParentResourceCenter.com  - Memberships are available there for $4.99 a month or $47.00 a year.

Yeah. You've talked about the car ride home a couple times, and then you just sort of opened the door to how you would interact with Christian. Did you have sort of a philosophy or routine so to speak of post games with him?

Yes. We would go to 711 and get Doritos and some sports drinks and Slurpees.

And ice cream. After games, I was looking forward to more than he was because I knew we'd go and get some food and chill out and have fun and go to the movies. That was our post game. I wouldn't even want to go near talking about the game because he needs ... it's not just about soccer at those ages. He needs to be a kid. So I was just very conscious after games. I knew he would be frustrated at times or wouldn't think he played well. He would just be quiet and sitting there. At the odd time, he would ask me a question about it, I would just say, hey tomorrow is a new day. This life, this is the game and you just move on and just quickly move away from it. So there were never long discussions or telling him how poor he played. Why would he want to go back to the field?

Those parents after games, they put their kid in the car. They're driving home and they're just screaming at their kid the whole time, you didn't play good, you don't work, you don't hustle, you don't do this, blah blah blah. The kid's just staring out the window and he's probably thinking, I don't want to do this. Why do I want to go play a sport when, if I don't do well, my parents yell at me? So that's a major, major no no in my book.

Keine Ausreden, meaning no excuses. You talked about how that's something you're feeling right now with our U.S. Men's National Team program. We have no excuses now. We have a coach in place. We have everything we need right now. Let's stop making excuses or talking about why it's not going to work. Let's put our energy forward to making it work. Can you relate that or you can talk more about that if you want, but relate that also to our youth culture? Do you think that this is a concept that we can bring into our youth culture to see some improvements?

Yeah. To me Skye, it's one of the biggest problems in our youth culture today. I think parents allow too many excuses and kids are coddled too much. If they're not performing to the level that they feel they should be performing, a parent might feel a little embarrassed and then lean on an excuse. "He had too much sunburn." Don't laugh at that because I've heard that before. "He was sick all week." That's why he wasn't able to run as much. I just think we're creating kids now to always have the ability to lean on those types of things and not just say, hey not everything always is going to be perfect. I'm going to have good days. I'm going to have bad days, but I should just always look back at me. Parents, the same way.

We need to be teaching our kids that they need to hold themselves accountable for playing a sport and understanding that not everything is going to go well. The more excuses we make, and the more times we're getting our kids out of ruts by making these excuses, we're really not strengthening them. We're almost weakening them and having them not take that responsibility as a player themselves. It's a very important topic to me. I'm not saying a parent, if a kid comes over ... If your child comes over to you after the game upset and crying because they lost, that you should turn to them and say, "just play, don't make any excuses."

There's ways you need to go about addressing your child, and also as a coach. If they're trying to ... If a player comes to you and says so many things other than, hey I just need to be better. Coach, I'll work harder. As a coach, you need to make sure that, in the appropriate way, you're making sure that those players, even at young ages, are understanding that every time you do make an excuse, if you blame someone else or blame something, you're becoming a bit weaker as a player, as a person, and you're not really strengthening yourself.

Previous Post What is Resiliency and How Do We Help Our Kids Build It? Next Post Richard Shorter – Courageous Parenting – Webinar Re-Cap