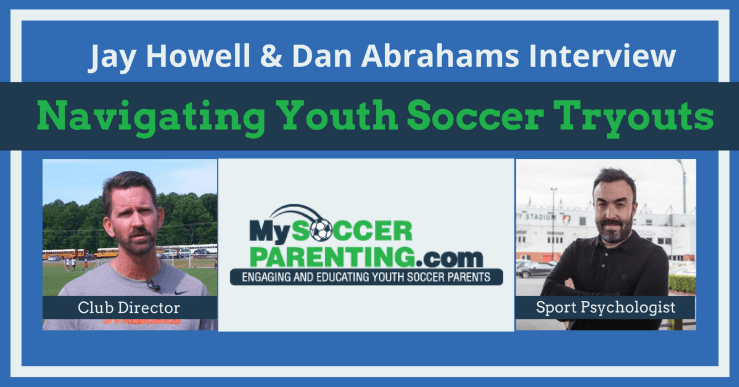 What a fantastic conversation we had recently on the SoccerParentResourceCenter.com Webinar with Jay Howell and Dan Abrahams talking about the youth soccer tryouts!

Jay is the Executive Director at the Richmond Strikers, has been in the youth game for over 20 years and is the former Executive Director of the ECNL.  I always appreciate Jay’s perspective and sound advice and this interview was full of great insight.  One of the listeners mentioned how “reasonable” Jay was with his comments throughout the entire webinar and I think that’s a perfect way to describe Jay. With so much stress surrounding tryouts and the youth soccer landscape in general, we need more reasonableness from our leaders.

Dan is a Global Sport Psychologist, the author of ​Soccer Tough, Soccer Tough 2, and SoccerBrain and is a sought after speaker and educator.  Dan has been a regular contributor and supporter of the Soccer Parenting Association and his comments during the hour long webinar did not disappoint! I love how Dan moves beyond the psychology explanations and is able to give solid, actionable advice to parents.

If you’d like to watch the entire Webinar you can find it in the Interview Section at the SoccerParentResourceCenter.com.

In this first clip I ask Jay for his advice for parents when considering moving their child to a new/different club.  What questions should you ask, and what process should you go through as you are considering a potential move for your child.

Jay, can you give parents some advice as they’re thinking, okay, I might be switching clubs, some questions that they should be asking of the clubs that they’re looking at in their area?

Well I think, ’cause Skye you and I have talked about this before, I think that you have to take some responsibility to do some homework. So if you’re going to be looking at other clubs and/or other teams for your child you probably need to find out about the coach, the style of trainer this coach is, the methods in which they want to work with or under, and also you need to think about going and really watching the team play two or three times, to get an idea of what this coach is looking for. Because that is a variable in all this. Every coach has a very distinct style, and that’s going to determine the types of players that they’re ultimately looking for.

And you have to also take into consideration what you’re leaving behind and why.

And so I think it’s important that you shouldn’t just, for lack of word, willy nilly just sort of pick out based on things you hear about the next place you want to go. Because it is a time commitment, it is a psychological investment, it is a financial investment.

In this second clip I ask Dan for advice for parents on how to handle any personal stress you may be dealing with during tryout season!

I know there’s a lot of parent stress that’s going on. You’ve alluded to it, I have. I’ve been getting emails and messages from parents about that.

Dan, can you jump in and give us some information or some ideas for parents on how they can deal with their personal parent stress and how that can play out?

Well, I would direct parents to this idea of what they can and can’t control, and I know it sounds a very obvious thing, but you do have to remind yourself that you can’t control outcomes, you really, really can’t. I mean, this evening I’m going to be … I say this evening because it’s evening here in England, but I’m going to be talking about self-talk, talking to yourself, because that’s a really important psychological skill for a soccer player to have, but also a soccer parent to have, because as you guys have alluded to, when there’s stress involved and there’s a lot of stress involved, you’ve got to have great self-talk, and you’ve got to remind yourself hey, I’m nervous. That’s okay, that’s understandable. It’s understandable that you want your child to do well, that I want my child to do well.

This is a stressful situation for them. They’re nervous; that makes me nervous. That’s okay. That’s allowed, okay. That’s not neurotic, right? That’s perfectly acceptable and ordinary.