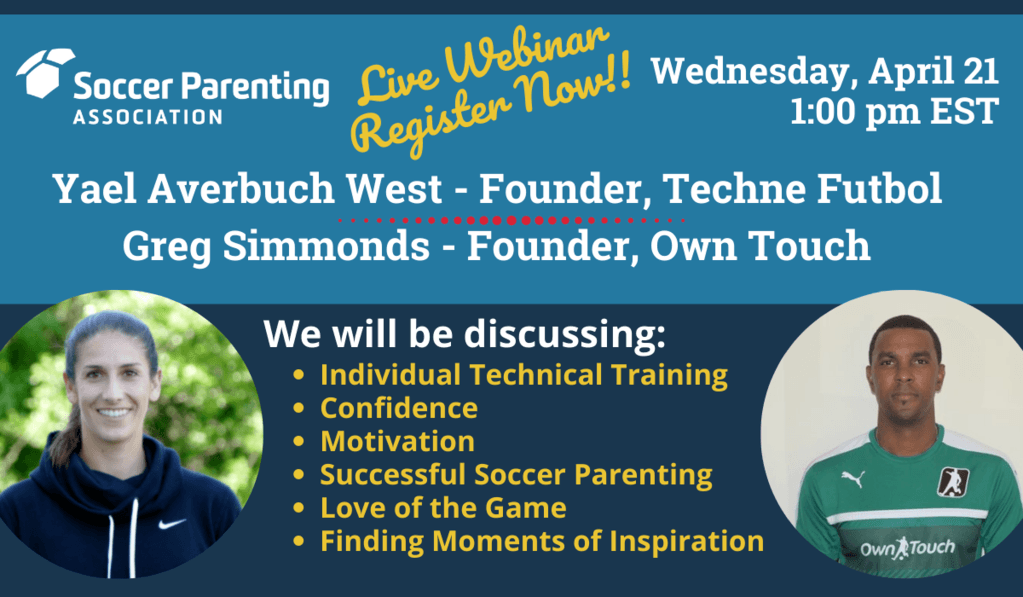 The Important Role of Individual Technical Training for Player Development

In this hour long free webinar we will be joined by Yael Averbuch West, Founder of Techne Futbol - and Greg Simmonds, Founder of Own Touch and Futsal RVA to discuss considerations for parents when it comes to:

Yael Averbuch West is the founder of Techne Futbol, a training app designed to help players form an individual relationship with the ball.  She is also the executive director of the National Women's Soccer League Players Association. A professional soccer player, she last played as a defender for Seattle Reign FC in the National Women's Soccer League.

During her career as a center midfielder at the University of North Carolina at Chapel Hill, Averbuch was named national player of the year by both Soccer Buzz and Top Drawer Soccer. Averbuch was selected in the first round of the 2009 WPS Draft (4th overall) by her home state team, Sky Blue FC. She later played for Kopparbergs/Göteborg FC in the Damallsvenskan and the UEFA Women's Champions League and made a brief stint with WFC Rossiyanka. She is a two-time WPS champion with Sky Blue FC and the Western New York Flash.

Before turning professional, Gregory Simmonds was his high school's (Sherwood High School, Olney, Maryland) first ever All-American athlete - the second is US National stand-out Oguchi Onyewu. He also still holds the record for goals scored at his alma mater, Howard University. Simmonds began his professional soccer career with the Hershey Wildcats where he scored 35 goals, had 16 assists and was named USL-1 Rookie of the Year in 1999 and Team MVP in 2000. Simmonds also played for D.C. United in the CONCACAF Champions Cup in 1999.

Simmonds retired from professional soccer shortly after he founded the Soccer and Futsal programs at U-TURN Sports Performance Academy where he served as Director for over 3 years.  Simmonds then became the Co-Founder and President of Own Touch Soccer, as well as Co-Founder and President of FutsalRVA. Simmonds holds a US National A License Coach.  FutsalRVA has produced four US Youth National team players from and currently has five US Youth Futsal National Championship titles.

Suitable for parents and youth coaches