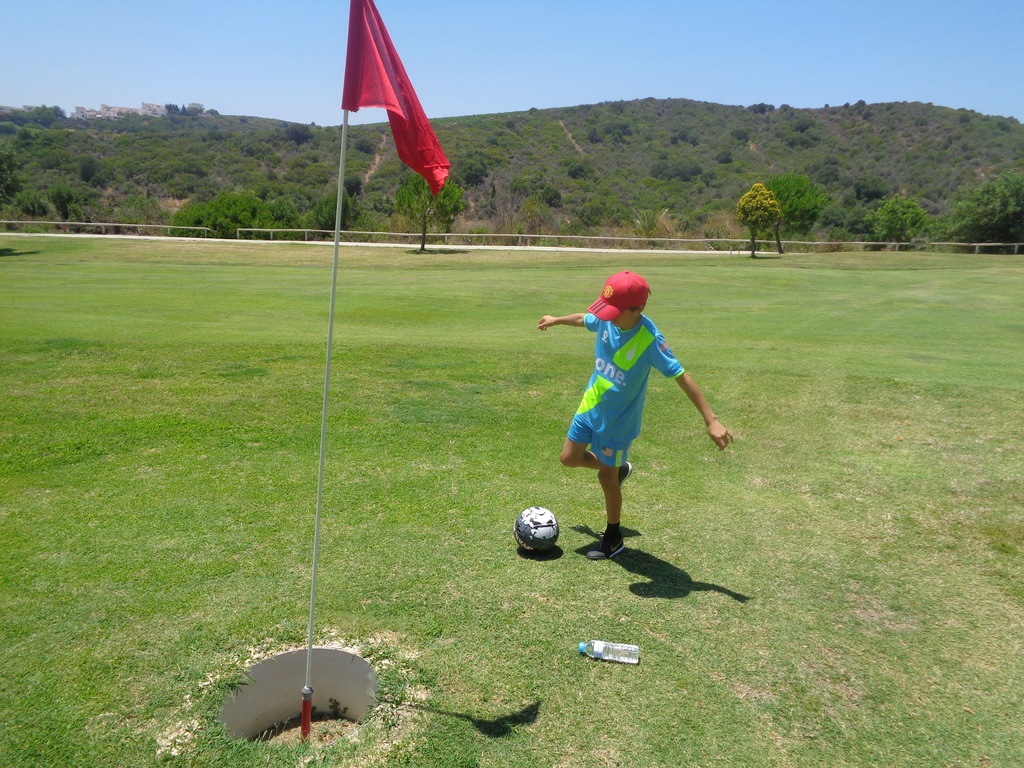 My goalkeeper son and I had arrived in Spain for a two and a half week vacation.  We had flown into Marbella, on the southern Mediterranean coast, to give us a chance to relax and adjust to the time difference before heading into the interior.  We were on a day tour of the British outpost of Gibraltar, had out of curiosity gone to check out Victoria Soccer Stadium, and we were standing on the side of the pitch looking things over.

“What do you mean you’re bored?  We just got here.  Don’t you want to go to the beach?”

“You just had a monkey hop on your head, how can you be bored?”

“I want to play soccer.”

What my son was slowly realizing was that, despite all the talk about Spaniards being so into soccer, in southern Europe there’s an astonishing lack of pitches for kids to play on, even small-sided pitches.  Those that are available, like Victoria Stadium, are kept fenced and behind lock and key in order to preserve the grass.  Usually only organized teams have access to those fields, with casual players using concrete futsal courts sprinkled throughout the schools and barrios of a city.  Futsal is great for developing ball handling and quick passing ability.  While helpful to goalkeepers in developing body blocking skills, it’s not so useful for goalkeepers to practice their diving or distribution.  The pristine grass of Victoria Stadium was beckoning to my son, but playing on it, much to his disappointment, was definitively out of the question.

But the guide we were with had overheard our discussion, and had a suggestion.  “Have you ever played footgolf?”

Neither my son nor I had ever heard of footgolf, but our curiosity piqued, the next day we were packed off to the golf course in the neighboring town of Casares to meet Gareth Morcombe, an Irish ex pat who lives in Spain and is the Director of the Casares Footgolf Club.  Gareth has been a golfer since the age of 12, but has since then thrown himself into footgolf, playing even on the European Footgolf Tour.  He has designed numerous footgolf courses and from his home in Spain has done his best to promote footgolf, both to the local Spanish population and to the vacationing ex pat community so prevalent in Spain’s Costa del Sol beach area.  He clearly had a passion for the game and it was very interesting to meet him and hear all about footgolf. 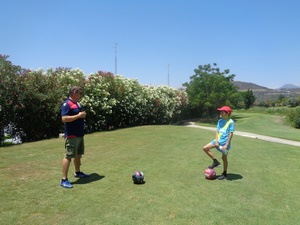 Gareth explained that footgolf is played very similarly to golf, except that players use a soccer ball instead of a golf ball, and use their feet to kick the ball instead of hitting it with golf clubs.  The game is played on a golf course, with distances that can be adjusted depending on the power of the kick held by a player, and with special 21 inch cups inserted into the golf course near the regular golf hole.  As in golf, players try to hit the ball into the cup, and the player who finishes the course with the fewest shots wins.  The basics of the rules having been explained to us, Gareth handed us our balls and sent us out for an afternoon of footgolf under the Andalusian sun.

It has been quipped from time to time that golf is a good walk spoiled.  I had golfed in my teens and twenties, but had over time drifted away from the sport, given the large investment of both time and money it required, and I found myself generally agreeing with the sentiment behind the quip.  Frankly, I had come to regard golf as being frustrating, and had really only agreed to our footgolf outing to placate my otherwise restless son.

But I have to admit: we both had a blast.  For me, footgolf was more accessible than golf, since I didn’t have to worry about my equipment or swing technique, and could just be relaxed and otherwise enjoy the walk and time spent with my son.  Accessibility is probably footgolf’s greatest strength.  It can be played by families with kids as young as 7 or 8 looking for a casual day out, or young adults just looking for something silly to do.  It can be played by footballers looking to improve their kicks, or older people looking to enjoy nature.  The technique isn’t as complicated or as intimidating as golf, and the length of any hole can be adjusted, so footgolf can be shared by a wide variety of people, from casual amateurs exploring a lark to those on the competitive professional circuit.

For my son, he got some great practice on his soccer technique.  The tee offs were a great way for him to practice his long goal kick, and to work on getting power and height on his distribution, particularly when there was a barrier like a hedge or water trap in the way.  The sand traps were useful in practicing his chipped shot since the rules prohibited running up to balls in the trap.  And on the greens he got to practice the accuracy of his short passes as he made his way towards the hole.  It’s a great way for footballers to build leg strength and target accuracy, but at the same time have fun doing something different other than a constant repetition of rondos or long driven shots on a pitch.  To make things more challenging, we even did ball juggling competitions between holes to determine who got to shoot first.  My son especially recommends footgolf for goalkeepers looking to improve their goal kicks or corner kickers looking to improve their set pieces. 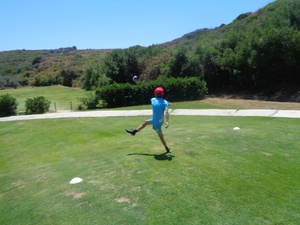 Footgolf has been around since the mid-2000s, originally played in parks before getting access to golf courses.  It has been growing since then.  In 2012 the first Footgolf World Cup was organized in Hungary, and in 2018 the most recent Footgolf World Cup was held in Marrakesh, with over 35 countries participating.  In Europe, footgolf tends to be popular in the northern countries, where people are familiar with both golf and soccer and readily accept this unique fusion between the two.  Indeed, according to Gareth, most of the patrons for Casares Footgolf Club come from northern Europe, such as the British Isles.  But the sport has also been slowly making inroads in Spain, particularly among soccer players, because given the dearth of pitches available for practice, there is need to practice the long passing game.

You might think that golf courses might be reluctant to modify their courses by adding extra cups and flags that might distract their golfers.  But footgolf is a great way for golf courses to stay busy, particularly during the off-season or the off-hours (at the Casares golf course footgolf is available in the mid-afternoon), and to introduce their businesses to young people, who have been increasingly reluctant to pick up golf given the time, expense and accessibility issues.  In the United States alone, according to Wikipedia, there are over 200 courses that offer footgolf, from Portland, Maine, to San Diego, California.

So if you are interested in adding a little variety to your soccer training, doing a fun team bonding exercise, or if you are just looking to put your own soccer skills to a unique use, visit a footgolf course in the near future!  You can find a list of courses at the American Footgolf Federation: www.footgolf.us.  Or if you find yourself in Casares, Spain, look up the Casares Footgolf Club: www.footgolfcasares.com.

And for those of you that are wondering, yes my son did whoop me at footgolf…big time!…I told him it was because he was wearing turf shoes and I wasn’t, but to best honest for his size and weight, the kid’s goal kick is becoming pretty wicked.

Previous Post The Role Parents Play in the Motivation of Their Child Next Post When Does Learning and Development Take Place?