Parents: Be In Control of the College Recruiting Process - Soccer Parenting Association 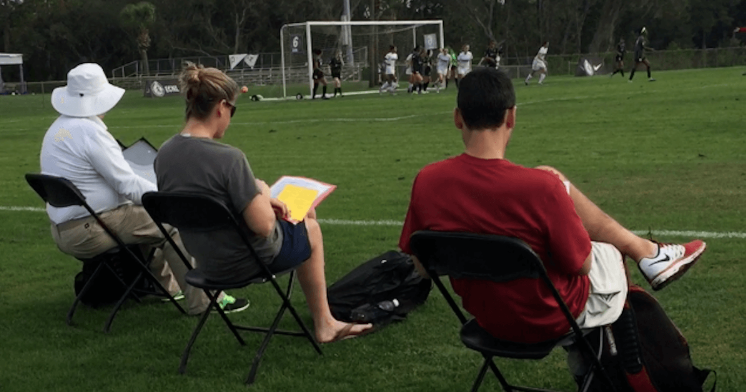 Parents: Be In Control of the College Recruiting Process

I spent much of the recent Holiday Break in Sanford, Florida at the ECNL showcase. My daughter is a freshman, so this was the first soccer event where the college coaches converged on our sidelines – presenting an entirely new matter to consider for the parents, and the players.

In Sanford, I found myself equally having thoughts of “Are we seriously already doing this? … She’s only a freshman,” and “I wonder if XYZ college watched her play?” The conflicts with my emotions were thought provoking. In one way I was happy for her and how she was playing as the coaches were watching – and in the other way, I wanted to completely protect her from having to start thinking about such a large decision so early in her high school years.

As I’ve mentioned in my previous posts about the college selection process – I am a big believer in being in control of the process and not making a college decision too soon unless your child is positive about the college, the coach, the team and the playing environment. That being said, I do realize there is a good chance my daughter will decide where she is going to go to college at the end of her sophomore year or the first half of her junior year.

3 Things to Remember about the College Selection Process

1. There is a college for everyone - Key Word - College (not soccer)

First and foremost, research must be done on the various colleges of interest to your child. Although where your child will play in college feels like a soccer decision, it’s essential that it remain a COLLEGE decision.

Our children need help developing and idea want type of college suits them. Many players I have counseled over the years on their college selection process have initially, for instance, thought they wanted a large college with a big-time football program. After visiting some campuses, though, they quickly learned that a smaller college equally or better suited them.

Start visiting colleges. Get your child onto as many campuses as possible – so they can start to understand what feels right and comfortable to them. And make the visit NOT about soccer – but about the college.

On the way to Sanford, for instance, we visited the University of Florida. We didn’t meet with the coach and only did a quick drive-by of the soccer facilities. Instead, we spent our time walking the campus, learning about the student-life and the educational opportunities. We wanted to get a feel for how the campus connected with the town and have a chance to look around and see if it felt like a place that could feel like home for 4 years.

My child’s list of possible colleges has 18 colleges on it at this point. As we visit campuses this year, I would assume that list may shrink 8 or 10 based on how she feels about the campus once she has seen enough campus’ to compare them.

As a parent I feel good about starting the process focusing on the academics and the campus. Being in control this way feels right.

2.  The process is different for everyone

My husband and I were sitting by the hotel pool talking about the college selection process for my daughter between games and I became a bit overwhelmed with the concept that this was happening when she was so young. There was a team of older girls near us – and a couple of their parents sitting next to us. At one point, I turned around to the parents of the U-17 team and asked “Have all of the girls on your team committed to colleges?”

First, I was impressed by both of the dad’s and their level-headed nature. One of the dad’s daughters had committed to a college early, the first one to do so on the team. She knew where she wanted to go to college and the decision, therefore, was an uncomplicated one. The other dad mentioned that this one early commitment caused a bit of pressure within the team and his advice for parents: “RELAX.” Don’t let the stress of one player committing to a college make you feel like your child needs to do the same.

The process is different for everyone.

While there is the obvious – that the best player will most likely commit earliest…there are also other circumstances. Players may want to attend their parents’ alma mater may decide early, or players who are super smart and want to attend a Division 3 college for the academic rigor may not decide until late in their Junior year because those colleges start recruiting later. Players will start making decisions at various times and as parents, we need to remember the process is different for everyone….

3. It requires some legwork to be in control

After the Sanford event we received a list from our team manager detailing the college coaches who attended the various games the team played. It was a hugely varied list of approximately 150 colleges. Everything from national championship participants to small colleges I had no idea had a soccer program.

When I saw the list – I was struck with a sense of calmness because my daughter has already created her list of possible colleges. I was simply able to cross-reference my child’s list with the colleges that had attended the event. If she had not done the legwork to create that list – I would have felt a bit overwhelmed and a bit out of control. I would have been tempted to use the colleges that had seen them play as the base for the list my child created.

I don’t want to sit around and wait for colleges that happen to see my child play to reach out to their club coach expressing an interest in them. Instead, I want to be proactive about the process so I can be sure my child ends up at a college they will love.

With that in mind, prior to Sanford, I had my daughter reach out to all of the colleges on her list to let them know of her interest in the college and that she would be in Sanford. For many of the colleges, this amounted to her filling out – over and over again – an on-line recruiting survey/questionnaire. Often there was no email provided for a coach on the website so this was the only communication option. For the colleges that had emails for coaches listed, she emailed them a quick couple of paragraph email letting them know she was beginning her process and had identified their college as a possible good fit her academically and athletically.

11 of the colleges on her list were at the Sanford event, attended one of her games, and have now, potentially, seen her play. Although the colleges are not allowed to call us, or send us anything other than the standard form letter at this time, my daughter can continue to reach out to them. And, if there is any interest moving forward on their part – then they can encourage our club coach to have her call them directly. If WE call THEM, they can talk with us.

We will keep going through this process, crossing off colleges we visit that don’t seem to be a good fit from campus/academic standpoint and colleges that are not interested in my child after seeing her play. Honestly, she probably won’t add any colleges to the list that are not already on it as we went through a rather thorough process to start with – but she may.

Parents and college coaches all agree that the recruiting process happens too early. That being said, in the quest to help our children fulfill their goal of playing soccer in college, recruiting is necessary. Ultimately, we want our children to play for a college that meets their academic needs, with a team that they feel an emotional connection to, for a coach players and parents trusts, on a campus that feels comfortable.

The number one thing parents can do to ensure this happens?

BE IN CONTROL OF THE PROCESS

Realize there is a college for everyone and keep the school, not just the soccer, at the forefront of your decision. Remember the process of committing to a college is different for every player and if you are going to be in control of the process, you need to create a list and visit campuses early in the process.