A Parent's Guide to Analyzing a Youth Soccer Game 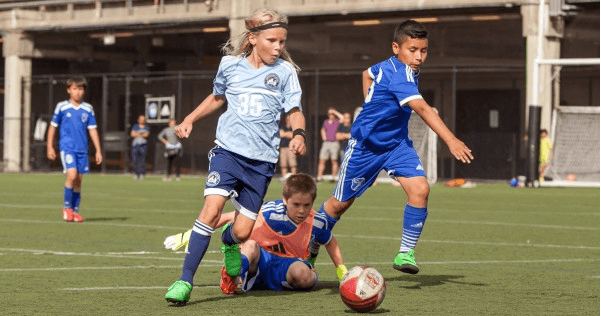 A Parent’s Guide to Analyzing A Youth Soccer Game

Youth sports are meant to be fun and entertaining; to serve as a foundation for teamwork and managing challenging environments in later years.

Unfortunately, the desire to win at all costs and the agony resulting from defeat takes away from the joy of youth sports – both for parents and children.

Everyone likes a winner, but which would you rather your child to be: a minor contributor on a winning team or a catalyst on a mediocre team? As soccer parents, it is not our responsibility to analyze game results or figure out how to improve the team. Rather, we must focus on ways to help our own children have fun and improve their technical skills so that they can achieve greater success in later years.

So how do we go about turning a poor team result into a winning learning opportunity for our child, even if we know little about the sport?

In the early years (U4-U6), emphasis should be placed on technical development, specifically on dribbling as these young players have limited to no grasp of the tactical aspects of passing or team play. This is a great age to introduce dribbling moves such as step-overs, scissors, lunge, etc.

Parents will become frustrated and waste their voices if they scream for players to spread out and pass at this age. Instead, during games and practices players should be encouraged to dribble, be creative, and try different moves; look to see if they are able to keep the ball close to their feet, change direction, and dribble towards open space. If your child is able to dribble and easily change direction in a competitive environment, every game can be considered a success.

In order to perform an objective analysis of your child’s performance, it is important to understand the difference between technical abilities and tactical understanding. Technical ability refers to the soccer skills used by individual players such as dribbling, passing, receiving, shooting, heading, tackling, and juggling. Knowing where to be on the field based on game conditions requires tactical comprehension.

Between the ages of U8-U12, players begin to understand that soccer is a team sport and actually more enjoyable when the ball is shared with their teammates. Passing and receiving skills become much more important, but along with that comes the tactical concepts of spacing and movement.

During games, as a parent continue to observe dribbling moves, but take note of your child’s decisions with and without the ball. Count passes that are successfully completed; the number of times they received the ball from one direction and dribbled it or passed it in a different direction; how often they were able to control the ball close to their feet or bring the ball out of the air with limited to no bounces. In addition, keep an eye on their movements to create space and good passing angles for their teammates as opposed to standing behind defenders.

Another thing to look for is where your child’s vision is focused. Is it constantly following the ball, or is their head in continuous motion making them aware of their surroundings? Capturing as much of this information as possible will be the best indicator of progress and development, regardless of the final score.

The same type of analysis can be performed for older players, U13 and above, such that every game serves as a learning experience. So, the next time your child is at a game or even at practice, grab a pen and pad, find a comfortable spot on the sidelines, and keep track of:
Ages U4-12

When we start to focus on the performance instead of the results, it reminds us that our child does not have to be on the best team in order to develop into a good player.

Implementing this approach when watching your child play encourages you to focus on their performance instead of the results. If your child is open to feedback, the information you gain from your observations could help them reach their potential, regardless of their playing level; whether recreational or competitive.

Most importantly, it proves to your child that you’ve paid close attention to THEM; which is priceless in their eyes.

About the Author Luis Forero

Luis Forero is a USSF C-License coach with over 30 years of coaching experience at all levels of youth soccer. He is currently an AFC Lightning Academy Coach in Fayetteville, GA; a Georgia Soccer coaching instructor, an Olympic Development Program evaluator, and a USSF certified referee.