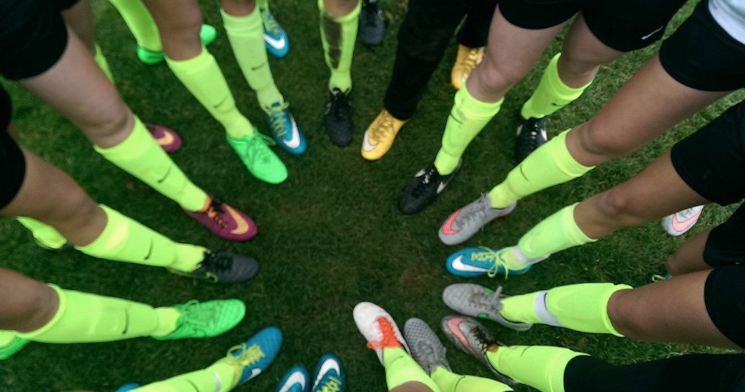 It’s been a disheartening first half of the year for my child’s team with more losses than wins. As a team, the players have had a perfect excuse for their rough start. Unarguably our best player, a U-15 national team player (and currently at the U-17 National Team Camp), was moved, within the club, from my child’s team to the older team. Additionally, one of our other top players was asked to do the same. These moves were made by the coach because they were in the best interest of those two players –  developmentally.

While us parents sat on the sidelines for the first couple of games – watching the team struggle to create a solid offensive attack, and watching the goalkeeper pick the ball out of the back of the net – I am rather sure most of us, as well as the players, were thinking: “Well, if we only had those other two players, we’d be winning.”

I’ll admit it, I definitely thought it.

Of course, that’s an understandable thought. It was like an elephant standing in the middle of the field – WE ALL COULDN’T HELP BUT SEE IT.

Something that wasn’t clear from the beginning but has become abundantly clear over time:

From a soccer standpoint:

As parents we have learned that DEVELOPMENT doesn’t always mean the development of soccer skills.

The key to this situation being a positive one for the team – along with a coach that maintained his perspective and kept his cool, is the parents. Without a doubt, if the parents had started getting upset and frustrated – if they had started whispering in cliques on the sidelines and being negative in front of the kids – no one would have benefited.

Instead, the parents maintained perspective. By not turning into crazy soccer parents where winning became more important than development, the parents allowed the players to learn some essential lessons they will draw from for the rest of their life.

By allowing development to be more important than winning the parents allowed the players to learn the following lessons:

1. It’s important to acknowledge your feelings and frustrations – so you can learn to respond appropriately to them.

You can’t ignore the elephant standing in the middle of the field! Acknowledge it – it’s okay to say “We would probably have won the games if the players were on the team.” Once that is acknowledged, think about what an appropriate response to this frustration may be. Should our kids complain to their other teammates in a text-message rant? Should our kids just give up and relegate the team to having a losing season? Should our kids ask the coach to move the players back? By discussing the situation an appropriate response can be formulated. In this case, the appropriate response was to simply deal with it, not complain, move on and get better.  (My exact words to my daughter were “suck it up and work harder” – but you may be more tactful!)

2. You must have faith in your teammates, build them up, give them confidence.

Because many of the players were playing in new positions, and many felt a lot of pressure to fill the gaps and make key plays, and many were stressed the team was losing – all the sudden there was a drop off in confidence for a few of the players.

How do we want our children responding in situations where a teammate is lacking in confidence and struggling to perform? Do we want them yelling at them, rolling their eyes, throwing their hands up in frustration – or do we want them to build up their struggling teammate by telling them what they are doing right, encouraging them and being positive?

There is a tremendous power in being a positive voice of assurance in someone’s life – many of the players on the team learned this valuable lesson.

Being optimistic is an essential life skill and one that comes more naturally to some than others. In this situation – when the players stopped thinking about what was happening to them that was out of their control and started thinking about what they could do to make it better – they were learning to be optimistic. Our children learning that they had a choice about how they would respond to the situation is something they can take with them in life.

Research has shown that, in the long run, optimistic people handle stress better, get sick less often, live longer, and are happier and more successful than their pessimistic counterparts.

4. Being resilient is a choice.

As Hara Estrof Marano Editor-at-Large of Psychology Today wrote her in epic piece “The Art of Resilience”:

At the heart of resilience is a belief in oneself—yet also a belief in something larger than oneself….It’s possible to strengthen your inner self and your belief in yourself, to define yourself as capable and competent.

So maybe scoring goals wasn’t going to come easily to the team this year. To deal with that frustration, they had to find new strengths and capitalize on them. They had to build up their team defending skills and grow in their tactical awareness and dedicate themselves on a deeper level to being better and being tougher. By working hard and being more focused, they developed a belief in themselves and a belief in each other. At this point, the team as a collective whole is more capable and competent now than they were last year with the two players who made the games easier.

If you go into a bookstore these days, and head to the business section, you will find shelves and shelves of books about teamwork and leadership.

Our kids will be a part of teams for the rest of their lives.

Maybe the team will be in the shape of a family, or of a relationship with a significant other, or with a study group for a super-challenging class in college, or a work group for their first job. Regardless of the make up of the team – the lessons our kids learn on the fields translate.

When our children are faced with a team that is struggling in the future do we want them to quit the job, or turn into the pessimistic team member who doesn’t believe it can be turned around, or the person who complains to their boss about the lack of talent of their teammates.

No, of course we don’t want that. We want our children to be positive voices of optimism and resilience in life.

Despite the win-loss record the team currently has, I am truly grateful to the group of parents and coaches we have working together. Because of our positive response to the two players moving to the older team we have allowed all the team, our children, a solid lesson in sticking with something even when it’s frustrating, believing in themselves individually and collectively, being optimistic when faced with challenges, communicating their feelings and learning what an appropriate response to them is.

Life isn’t always going to be easy, you’re not always going to be able to score goals with relative ease…. Sometimes you have to dig a bit deeper and be a problem solver…and facing life’s challenges with a group of friends is much better than going it alone.