Why BOOT IT is a Four Letter Word! Playing Out of the Back 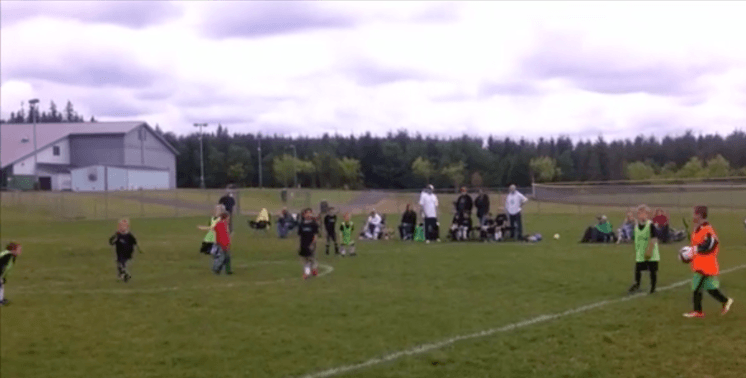 …And not necessarily the safe option

It’s something you hear at soccer games at all ages and levels in the United States all too often:

A player wins possession of a ball deep in their own half and immediately the call rings out from at least one parent on the sideline, and often from the coach and team mates as well…. “BOOT IT!”

And every time someone yells “BOOT IT!” an angel in Soccer Heaven loses its wings and plummets headlong to earth.

Similarly, when a goalkeeper gets control of the ball or takes a goal kick, the most common decision among American players is to “Send it deep”, often with the clear consensus approval of the sidelines.  If the goalkeeper plays a goal kick short or bowls a ball out to a defender, it often cues a collective gasp from spectators, followed by more exhortations to “BOOT IT!”, or similar variations on the fear driven Safety First theme:

Ladies and gentlemen may I present you “BOOT IT’s!” ugly cousins

“DON’T PLAY AROUND WITH IT BACK THERE!”

“NOT IN THE MIDDLE!”

Now to be fair, if players have not been trained up to be comfortable with the ball under pressure, and if a coach has not adequately prepared his team to play out of the back in a structured, organized way, it will indeed be a recipe for disaster.

But does that mean that “BOOT IT!” and “SEND IT!” are the safe answers?

Watch this clip from BVB Dortmund’s recent Europa League fixture with Italy’s Atalanta.  This play starts out with BVB goalkeeper Roman Burki in comfortable possession and under no pressure.  With short options available, including Gonzalo Castro at the top of the box doing an amazing 5 shoulder checks of his surroundings in 8 seconds, Burki decides to go long.

So how did that work out for Dortmund?

And here’s the thing, most American players, fans, and coaches who watched the match live probably did not even register that Atalanta’s goal was the direct result of a ball literally given away to the other team.  I know this is the case because I have seen dozens and dozens of examples of similar events happening in youth games and rarely have I heard a spectator or coach make a connection between a long punt, goal kick, or clearance and the goal they surrendered as a direct result.  Most will never make the connection, and when they do they will blame the distribution or lament that the clearance was not won, but the bottom line is that this goal happened because Dortmund  had firm possession of the ball and decided to give it away instead of keep it.

But if a team surrenders a goal (or even a shot) when their attempt to play the ball out of the back goes awry it’s a different story.  “Why didn’t he punt it?” “I knew this would happen”, “You gotta clear those”.

And it’s never the technique or decision making that’s critiqued or questioned “Why didn’t he take the ball across his body?” “Why didn’t the Center back slide over to give him an outlet?” “He needs to pass a little quicker there…”  No, the QUALITY of the attempt to play out is rarely examined, just the DECISION to play out in the first place.

Here is an example from the extreme opposite end of the spectrum.  Bayern under Guardiola finds themselves under extreme pressure against Wolfsburg and just doesn’t care.

How did that work out for Bayern?

Okay, so this is the part of the blog where the typical American soccer parent or coach is going to say “Yeah, yeah, that’s fine for Bayern and their World Class players… but our kids can’t play out of the back.  They aren’t good enough.  They aren’t technical enough.  It’s too risky.  This is only for the best players and it’s dumb to even try with our local youth teams.”

If it’s not possible, what about this High School JV team that had a grand total of three kids playing organized club soccer on the roster?

If it’s not possible, what do you make of this mid level Gu13 select team?

If it’s not possible, what do you make of this Bu10 team?

If it’s not possible, what do you make of this Bu8 recreational team?

If you watched the clips, you will have observed that none of these teams are collections of elite players. These are not products of our “World Class DA” system.  Most of the players on on these teams didn’t even go through a tryout process. But they all understand what they are doing.

And the truth is that Playing out of the back, if taught and executed correctly, is actually safer than sending the ball long.  It really doesn’t matter what the level or your players is. If you have a lower level team then quality of your playing out might not be great, but if you are competitive in your league then your opponent’s ability to counter you won’t be great either.

The caveat here is “If taught correctly”.  This is not something where a coach can come up to his team in the pregame huddle and say “Hey you know what?  Let’s play out of the back like Spain today!*”It needs to be organized, rehearsed, and trained**

*I literally saw this happen once, by the way.  It turned out exactly as you would imagine

** Sending a goal kick square to a wide defender and then having that player try to jam the ball up the line whether there is an opening or not is NOT “playing out of the back”.  Aargh! Don’t even get me started!

I started teaching all my teams play out of the back 6 years ago.  I’d say on average those teams choose the short option for keeper distribution about 2/3 of the time and only try to clear the ball in the run of play when it is bouncing around in the six yard box or some other extreme event.  In that time frame I can count a grand total of 3 times where a goal was surrendered after the Playing Out of the Back broke down, and one of these includes an incident where we lost the ball out of bounds at midfield and the opponent scored on the sequence after the throw in.  During the same time period my teams have surrendered 9 goals from long punts, goal kicks and clearances, despite the fact that we only choose those options 1/3 of the time.

So why is BOOT IT not the safe option?  Because every time you have the ball, your team potentially has a chance to score.  Yes, losing the ball closer to your own goal is potentially more risky than losing the ball in the other team’s half of the field, but risk is relative.  If you are a demolitions expert and you follow your training and are careful, handling dynamite entails minimal risks.  But if you are untrained or careless, it is probably best NOT to handle explosives.

Here is a clip of a mid level u14 team playing out of the back.  This is literally every opportunity in the game where the goalkeeper had possession of the ball.  As you can see, these girls create two legit chances (and eventually force the opposing team to stop pressing and back off) while never putting themselves under threat at all

So the solution is not to avoid risk, but manage it.  And to weigh the risk against the reward accurately.  Losing the ball close to your own goal is obviously dangerous, but did you know that statistically, more goals from open play in professional soccer start from sequences where the ball is won in the center of midfield than from any other area of the pitch, including more than are won near the goal?  Knowing this, does it make sense to intentionally trade 100% possession of the ball for a 50/50 loose ball in the area of the field where it is most dangerous to lose it?

In a recent excellent interview with French Magazine So Foot, Barcelona great Xavi summed it up perfectly:

“But hey, I do not see where is the pleasure to do that (clearing the ball- “Booting it”) anyway. Do it in the 93rd minute of play, to have control on the result, why not? But in the 60th or the 70th, what is the point? You still have time to find a solution, to take advantage! Clearing the ball is an intellectual defeat: ‘Can I really not do anything else there?’ When you recover the ball and you lose it again, you give a new possession of ball to the opponent. Don’t do that. Find spaces, pass the ball to the goalkeeper, dribble, get a throw-in by shooting the ball on the player you have in front of you. Do something, anything, but do not throw it out! My sense of responsibility prevents me from doing it.”

Like many of today’s parents (at least the older ones) I grew up playing at a time where soccer tactics were not so much about getting the ball and doing something with it as they were about dumping the ball into the other team’s half of the field and trying (or hoping) to force a technical mistake or a turnover you could capitalize on.  It was less a game of chess and more a game of “toss the grenade”, with the loser being the player in possession when the grenade went off.  This strategy still works at the younger ages of soccer at all levels, because in general a young player’s ability to capitalize on mistakes far exceeds a young player’s ability to avoid them.  But as players get older and more skillful and experienced, it becomes a function of diminishing returns.  The better the team you play against, the less success you will have.  And if you were to try and defeat a youth team from Spain or Germany with indiscriminant aerial bombardment they would just smile, thank you for the ball, and then jam it down your throat.

We need to teach our kids and our coaches not to be afraid, and teach them how to handle the explosives safely.  And if you get caught with a grenade every once in a while, so be it.  Better than getting scored on because you lost the ball than because you willingly gave the opponent the ball.

About the Author Scott Nelson

Scott Nelson is the Director of Coaching at NorTac Soccer Club in Tacoma Washington. Scott focuses on early player development, possession based play, and creating a better Soccer Culture in the United States.