The Power of Sport to Transform Lives: Remembering Ennio 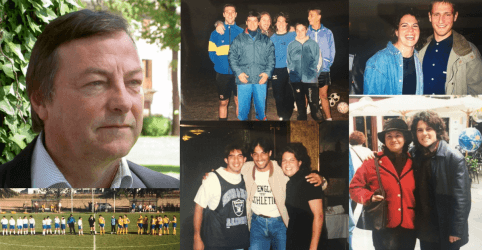 The Power of Sport to Transform Lives: Remembering Ennio

It’s amazing to me how often I think of my time playing in Udine, Italy, reminisce about a friendship or experience from that brief time in my life, or find myself smiling as my mind is triggered by a present day event – to my past.

Just yesterday my daughter walked around in her sports bra after her game and I smiled, remembering the old Italian women, pausing from sweeping their front stoops, shaking their brooms at me as I unknowingly offending them by running through the streets of Udine “naked” in my sports bra.

While watching Demark play in the recent World Cup Qualifiers I found myself grateful for Martin Jorgenson, a former Denmark player who played for Udinese, and his willingness to share his Italian tutor with me as we both navigated the Italian language for the first time together.

My Italian non-soccer friend Diana – who showed me the confidence to sneak into the swank Hotel Danieli in the Piazza San Marco in Venice and order a café as if we were guests – wished me a happy birthday on Facebook last month and I lingered on her comment for a moment…wondering if our paths would ever again cross.

My Italian memories and adventures from my few months living in Udine and playing for Tavagnacco Femminile are intertwined with my everyday life. I have written about my time in Italy, referenced it in my work for Soccer Parenting, spoken to young players about it, told my soccer friends about being in the middle of Serie A Calcio by living in the Hotel La Di Moret with all the Udinese Men’s players without families or on trial – and yet, I don’t often mention the sole reason for my landing in Udine – the man behind it all – Ennio Valent.

My “contract” was brokered between my former college goalkeeper coach, Manu – a part time coach and full time wine importer from the Friuli region of Italy. I have no idea how Manu met Ennio on his work travels, but Ennio was thrilled at the opportunity to bring an American woman to Tavagnacco, a small village outside of Udine in Northeast Italy to play for a club he volunteered with as a board member and where his son, Nicola, played.

My father dropped me off at Dulles airport outside Washington DC with two big bags and an Italian dictionary. I got on the plane not knowing if “ciao” meant “hello” or “goodbye” and I arrived in Berlin, Germany to meet up with my new team, already there for a pre-season training camp. Ennio greeted me at the bottom of the escalator in the bright Berlin airport, with a sign and a huge anticipatory smile! He rushed to me when we made eye contact, dropped the sign on the floor,  put his hands around my face – shaking it a bit – greeting me in a warm, eye-locked Italian welcome. Ennio spoke very limited English, but I immediately felt safe and comfortable in his care as he navigated the German airport and loaded my things into a van he had double-parked and left unattended at the curb.

A typical Italian man – he seemed to always be moving and speaking and negotiating and feeling an emotion that ranged from excited, to frustrated, to joyfully content to disappointed – all in the span of 45 seconds. It was impossible to keep up with him with our language barrier, but my observation skills kicked in and I felt in sync with him – like I understood him – even when I was at a complete loss for the words coming out of his mouth.

When the van arrived at the training facility outside Berlin, the team was standing on the stairs to greet me! I got out of the van to a collective gasp and a few “Che muscoli!” comments. Never before had they seen such muscles on a woman! I like to think I gave these women a new sense of what it means to be an athlete. In fact, I know I did – them, and all the men I got to know as well. We often trained alongside an older boy’s team and during pre-season they even invited me to play a scrimmage with the boys against a local team. The memory of the gasps in the crowd when I stepped onto the field, and then made an impressive breakaway save, will always make me smile. As I followed Tavagnacco Femminile on-line years later as they went on to finish towards the top of the Serie A Women’s table, I took pride to think I was a tiny part of their strong foundation.

But none of it would have been possible without Ennio.

Ennio quickly became my “Italian father,” and his wife Franca, my mother. His two boys – Pietro and Nicola – my little brothers and the grandmother who rode her Vespa to their home each day to do their laundry and make their meals – my Nonna. I was always allowed to take my meals at the Hotel La Di Moret, where I lived for much of my time in Italy, but there was a standing invitation to join the Valent’s for their afternoon meal – and I often did. I kick myself now for not writing down the recipes Nonna would whip up…or for not journaling more about their home and my experiences there….

Italian came to me rather quickly – and after a month I was able to hold my own in conversation. My mid-day meal with the Valent’s was often one full of questions about America – about growing up, about my family, school – everyone always had so many questions which I did my best to answer in about 3rd grade level Italian. Then, on a dime, the conversation became Italian feasts of fits and emotions. I’d lean back, stare passively at my plate….and waiver between feeling uncomfortable and inquisitive.

I am sure there was some resentment around the table now and then because I certainly caused some stress. Sometimes there wasn’t enough food to go around and they always wanted to feed me more because of how “muscoli” I was! I’m sure their teenaged son Pietro wanted that last piece of chicken as well!

Then there was the time I basically broke the washing machine with the mud on my goalkeeper clothes. Ennio, without consulting Franca, had offered to wash my training gear after the hotel told me they couldn’t do it any longer because it was messing up their machines with all the mud! By the time Ennio had offered to wash my things at his house, I had taken to washing my muddy jersey and pants by spraying them with a hose at the fields, and then carting the heavy and sopping wet clothes home with me to the Hotel on my bike (actually Nicola’s bike that was graciously given to me) – and then finished the cleaning by jumping all over them in the shower!!! They would never be dry by the next day – even if I hung them out the window of the upscale hotel – probably not what the hotel owner wanted to see. But Ennio solved the problem, as he always did, and arranged for one of the male goalkeepers I trained with – Luca – to take my training gear each night so his mother – obviously having developed a washing strategy of some sort – could handle it.

Ennio was always there for me. Sometimes without even realizing there was a problem – he would solve it. Maybe it was the gym membership so I could lift weights (even if I was the only woman ever there), or arranging for me to have a meal at a teammates’ home when he sensed I was a bit homesick, or being sure my phone calls were forwarded to his house from the hotel so I wouldn’t miss a chance to talk to friends or family.

Then there was Gigi. Gigi was one of the board members of the team and one of the people I rotated going to each week to ask for some spending money. Gigi was a sort of creepy older Italian man who – one time when I asked – conned me into going to lunch with him the next day so he could give me my money then. I was naïve and met him downtown at a restaurant and found myself in an uncomfortable situation at lunch that ended when I thankfully spotted one of the Udinese Men’s players – Max Caniata – walking outside.

I flagged Max down and asked him, wide eyed, for a ride back to the hotel. The story made it back to Ennio who “took care of it” and instructed me sternly, like a father would, to never agree to meet Gigi again!

I suppose I let Ennio down a bit at the end – for which I will always feel badly. The team wasn’t able to sort out my visa and the sense of adventure turned to loneliness and I asked to go home. He obliged, optimistically buying me a round-trip ticket with the hope that I would return. He kept advocating for me…even finding me a team in Germany who could sort out my visa – but by then I had taken a job coaching in Richmond. I could sense the disappointment in his voice when I told him I wouldn’t be returning.

I know I thanked Ennio many times – but today – as I learned via Facebook that he passed away – I hope it was an adequate show of gratitude with our language barrier. His son, Pietro remembered him as a man who “lived a life for others, especially young people through sport….” This absolutely beautiful Italian man with two sons and a heart of gold went completely against the grain in 1997 to support the local women’s team, when most Italian’s laughed at the idea of women playing soccer, and did everything possible to bring me into the mix.

It’s comforting to know that all across this world, in villages and cities, speaking different languages and following different religions – are people just like Ennio. People who see and appreciate the power of sport to transform lives. People who innately put others first and who find their life’s work in helping others. People who find joy and energy in giving of themselves to lift people up and enrich other’s lives.

My life was significantly impacted by my time in Udine. The lessons learned with the Tavagnacco Femminile team were not only meaningful for me, but also for my teammates, coaches, other players at the club and the Tavagnacco community. I will return one day and it will be an amazing reunion. Sadly – Ennio won’t be there to greet me…but that quick talking, emotional, problem solving, compassionate person will always live in my heart – and those of the countless others he touched.