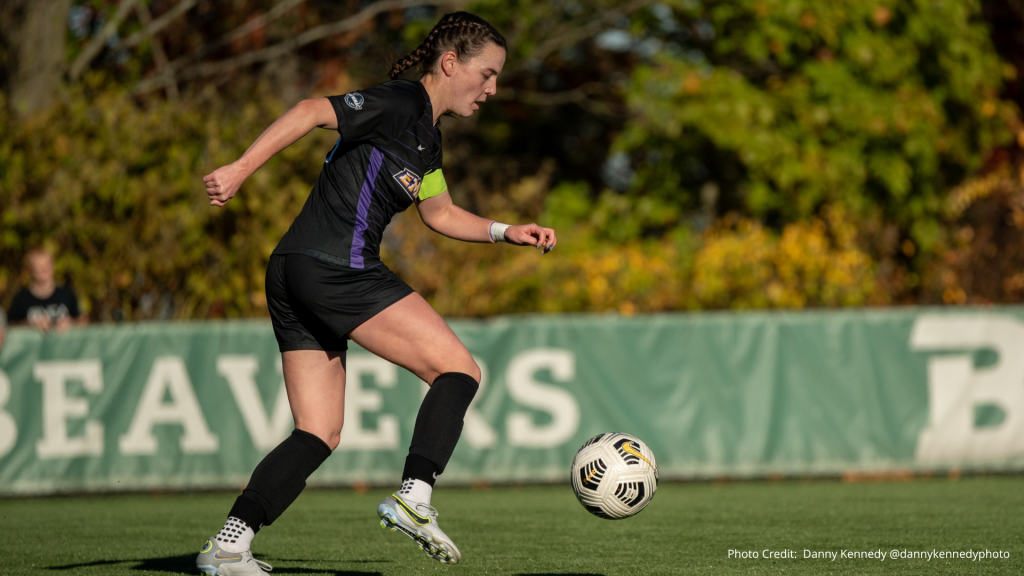 I thought there would be a deeper pit in my stomach when Cali played her final college soccer game!  Of course, there’s a tinge of melancholy realizing this chapter has passed. Plus, I know how much she wanted to win this NCAA tournament game and progress to the next round; it’s hard when your children don’t get what they want. Thankfully, however, I also feel a sense of excitement and hope at her continued soccer journey ahead.

There are a handful of endings built-in to our sporting structures in America. The last high school game, the last club tournament played, the final college game. Of course, these traditional endings hold an important place. Cali’s final regular season college game was met with some wonderful traditions – a special pre-game walk out with family, flowers, decorated lockers, and post-game celebrations.

Unfortunately, we often frame these endings as just that – the end. The end of a playing career. The end of competitive soccer. The end of playing on a team.  In fact, as I hugged Cali after the game, I heard one of her senior teammates say “Well, that was the last soccer game I will ever play.” THAT STATEMENT hurt my heart a bit.

Our normed soccer structures in America require much improvement. Ending a “playing career” after high school or college makes little sense. Why do we even position our children’s journey this way?

What if we instead framed these moments as memorable points along a pathway to a future of experiencing the game?

Just a thought: If we continue to support these ending narratives with such finality, do we run the risk of discouraging our children from continuing to experience the game in new, different, evolving capacities as they get older? Maybe it’s club or intramurals in college, co-ed adult, recreational level soccer, coaching, or refereeing…the possibilities are vast.

Personally, as Cali wraps up her college playing experiences, I want her to continue to learn and develop to her potential as an athlete, thereby finding continued joy in competition, and fostering healthy habits she will take with her for a lifetime.

Cali turned 22 years old last week. It seems she has not even reached her peak as an athlete. In this past year she has gotten stronger, developed fierce mental skills, and continued to build her fitness base. She still has so much to learn about the game!

Her player pathway to this moment has been a bit unique. She was the only player on her very competitive club team who opted to play Division III college soccer.

Today, Cali is a completely different person and athlete than she was in her sophomore year of high school when she was being recruited to play collegiately. At 16 years old she was being asked to make a decision regarding the next 7 years of her life that was wrought with pressure and challenge – exacerbated by the fact she was experiencing a tremendous amount physical and emotional growth and development.

Thankfully, in hindsight, she chose a perfect path – playing Division III. Emerson College has been an environment she could flourish academically, develop physically and mentally, and play a tremendous number of minutes in games! She started every single game of her college career, was a three year captain, found the time to take and receive her USSF D Coaching license, and was empowered to continue to develop her love of the game in a safe, nurturing environment that highly suited her in these important developmental years.

Of course, it’s not possible to know for sure, but a distinct possibility exists that if she had instead chosen to play at a higher level, Division I environment - one she was not yet ready for - where the travel commitment during season was more intense, where the pressure seemed stronger, where the playing time was potentially limited– she may have opted, as so many do, to end her playing career during college.

My sense of optimism today is driven by the fact that possibilities to continue to play are plentiful for Cali. Adult, semi-professional competitive summer leagues in the United States such as the league she played in last summer. Overseas playing experiences while going to graduate school in Europe. Playing professionally, if she chooses to attempt that pathway, are all options available to her. Professional leagues are being launched at historic levels across the World for women and with these new leagues come opportunity for aspiring athletes of various high levels of performance. So many possibilities….

From a young age, we seem to constantly be pressuring our children to commit to environments they may not be ready for mentally or physically, and in doing so, we ultimately push too many of these players away from the game. Too much too soon has a whole new meaning to me as I reflect on Cali’s final college game.

Could an important step in reframing the beginning of a youth players experience be to reframe the end?

What if a playing career never really had a defined end as our players begin?

Is the fact we place the ending point too early part of the reason there is so too much pressure too soon on players?

Would removing the end enable players to determine their path with less stress to conform to a specific journey they are possibly not yet mentally or physically ready for?

Cali’s path was a bit unusual. She stopped playing soccer for a year when she was 9 and then opted to play recreation level soccer before trying out for a competitive program again 18 months later. She decided to be a summer camp counselor in Maine during the important recruiting summer before her junior year in high school. Cali even dropped out of high school and left her club team during her Senior year to go and live and play in Spain with TOVO Academy Barcelona. Allowing her to navigate the path outside the norm was not easy for me.  I was faced with stress thinking she was missing out, would fall behind, would not be recruited, and would face unwanted consequences for her decisions that impacted her future.

Today I can say - Mission Accomplished: She loves the game.

I am so grateful this doesn’t feel like an unwelcome ending today. Cali can’t wait to continue to play. Instead of the end, her final college game is a memorable point along her journey to experience soccer the way she chooses, long into the future.