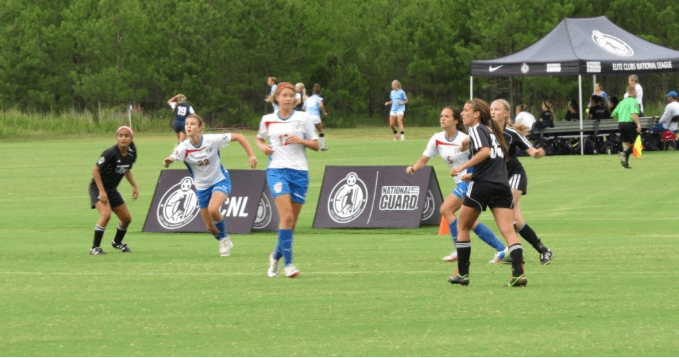 What a great conversation this was with Stuart Armstrong! Stuart has spent the past 20 years focusing on Athlete Development. In this short clip, he defines what he calls the "talent equation" and how not getting it right is keeping the talent pool too narrow in youth soccer.

Enjoy the short excerpt of our recent webinar below. If you would like to see the full version, click here for a free three-day pass to the SoccerParentResourceCenter.com.

Stuart is a Sports Science Graduate from University of Wales who has worked in sports development for the past 20 years. Stuart has held positions in coach development, performance and talent development at England Golf, UK Coaching and the Rugby Football Union. Stuart is currently the Head of Coaching and Professional Workforce at Sport England. He has been responsible for writing and publishing two national strategy documents, ‘Coaching in an Active Nation: The Coaching Plan for England’ and ‘Working in an Active Nation: The Professional Workforce Strategy for England’.

Looking for More? We have the full interview available at SoccerParentResourceCenter.com. Grab a free 3-day pass here.

Stuart:
The reality is, is that, um, people think of a talent pathway, like a pyramid, but the reality is it's not like a pyramid in reality, what it is is it's almost like, um, it's like a tiny column, right? So there's this big square base and a tiny column, right. Gets, it gets way too selective way too soon. And there, that means as a result, the actual talent pool is really quite narrow. Okay.

Skye:
You keep referring to talent. Can you define that for us?

Stuart:
Well, I define talent as, um, so this is what the talent equation is. The actual equation for me is the combination of both the, what I call the hardware, you know, the physical, the technical, the tactical kind of capabilities that enable somebody, you know, so the things that are going to help them, um, and you know, and that's all, that's both a combination of, um, some genetics, but also some development combined with what I call the internal factors, which is, um, everything we talked about for, you know, kind of the, kind of the passion, the drive, the commitment, the dedication, you know, because that is a factor, you know, those factors are important in order to develop. And again, those are way more developable and we thought they were, so those two things combined over time, oh, sorry, but also magnified or influenced hugely by external factors.

So in that, in terms of our conversation, those external factors are social dynamics, schools, clubs. And most importantly, I would say parents given that parents are so influential on children's lives and can be important to that guidance all over time. So that's the equation, if you like. Um, and when I talk about salaries and individuals, often people think of talented individuals as those, with the physical capabilities, I'm as interested and believe that we need to consider those with the internal factors, the sort of the drive and the dedication, the commitment, because that's such an important quality. That's actually quite hard to develop. So actually, if you're really looking for talented individuals, you're not necessarily looking for the ones where the physical guests, you worked for the one with the real commitment. And when you look at it, when it looks at who were the ones who, who make their way through, it's the ones with the dedication and drive, what

Skye:
What do we know about specialization? What are we starting to rethink about it?

Stuart:
You know, it's this whole idea that you should, if you, if you do one sport too early, you become really one dimensional. It has increased rates of injury, increased rates of burnout and all those sorts of things. And actually what we should have as a mixed diet of sports. And then you select later, but most talent systems don't allow you to. They force you to specialize earlier and earlier, even though we've known this for a long time. So like for a long time, there's been a whole body of research that suggested that late specialization is the way to go. I mean, but we haven't really made much inroads in most talent systems if I'm totally honest.

Skye:
Yeah. And I think it's important to say that body of research is very anecdotal in nature. It wasn't there wasn't like a primary resource study that demonstrated that. So

Stuart:
What Joe Baker and Sandy did was look at the studies and gathered them together. And what they discovered was, I don't want to say that they were entirely anecdotal. I just say that they just use very different measures. And so it was very hard to compare one against the other. So what was considered to be a body of research, all saying the same thing in actual fact was not saying that at all. So what their latest paper has suggested is that we need to be less certain about this late specialization hypothesis. And what was interesting also was when I asked them about, well, so what about this idea that, you know, kids are doing stuff at the age of five and six and this, that, and the other, and it's got really increased relative, you know, increased rates of dropout burnout and all that sort of stuff.

You know, and th the theory there is you start earlier and then you just get bored of it later, and then you just decided I won't do it anymore. They said, actually, it's not about when you start there. Isn't really a correlation. It's about the experience. It's about the environment. And it just so happens that there's a tendency that earlier starting environment also happened to be the ones that become the can often sometimes be the most dehumanizing as in, you know, children are just kind of commodities. And so that's what creates the burnout and the dropout actually more so than the point at which you start there, isn't really a correlation with that. So they're not saying that the early spatialization argument is wrong. We'll right. What they're just saying is, is the body of evidence isn't strong enough for us to be able to make any, any strong arguments yet.

And again, it's an individualized thing. I think you have to be a bit more open. My point is, is that I think the principles of inclusion are more important here. If we actually have an inclusive pathway, a more inclusive pathway, a more equitable pathway, many of these problems, we don't have to ask ourselves anymore because actually children can come in at different stages and different they can cross over. So if they want to sample, they can, if they want to specialize, they can, it really doesn't matter. But the problem is the system is inherently inequitable and some of the social ills. And I'm not saying we're going to solve all those overnight, but my big mission in life, its own equation is to start to really champion that message.