Should My Child Play Up in Youth Soccer? 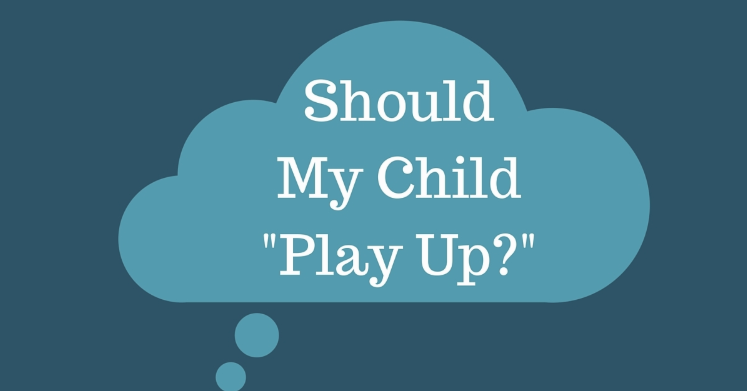 Should My Child Play Up?

A number of parents have contacted me recently with questions about children playing up to their Graduation Year vs. Playing in their Birth Year. It’s a relevant and important subject, and worthy of discussion.

Below is a specific question from a parent with names and gender removed for privacy.

In soccer age, my child should play U14 BUT because they are a 2018 Grad, they are playing up at U-15. The club staff and U14 coach want them to play for the U-14’s because the team is much better and can compete for a Conference Title. The U-15’s are struggling.

I am concerned about recruiting because college coaches will be at another age group recruiting and it will hurt my child’s chance of being noticed. The coach disagrees. What is your opinion?

I passed this question along to some of my collegiate and youth coaching friends and experts and was provided with thoughtful responses to the question specifically about recruiting, and also about the concept of playing up in general, the role of a coach in making that decision and also about the possible effect on the child’s body by playing up.

Below are the highlights of the responses to the question from the Experts:

No matter what age group a child is playing, they will be found by the appropriate level college coach for their ability. College coaches take a lot of time doing their homework prior to events and throughout the year within the recruiting process to find out which players they need to be watching at each recruiting event.

Playing Up Versus Down
Jay Howell, Richmond Strikers Sporting Director

Historically, we think playing up is better because it is usually faster and promotes increased player development. If a player has the skill and physical attributes to be able to play up and is psychologically prepared, than they should. However, there are exceptions to this, of course. One of those exceptions would be the level of play of both of the teams. If the younger team is a better team and the training environment is therefore better, then that is where they should probably be.

In theory, parents and players choose a club because they feel that the organization and the leaders in that organization will help their athlete accomplish his or her goals in a good environment.  When adversity comes, as it will, they should remember this initial decision.  When parents or players begin to feel that they don’t trust that the leaders, the coaches, or the organization are making the right choices in their players’ long-term best interest, then it is probably time to either question whether this is the right organization, or whether the parent’s or player’s perspective is objective.

The goal is to find the best solution for the individual athlete, while considering all aspects of a training environment. From a physical perspective, ideally we wouldn’t be grouping players by chronological age, but by biological age with individuals grouped in their optimal physical environment for development. If we didn’t use an arbitrary cut-off date (chronological age) we could avoid a number of problems observed in sport and academic environments related to late and early maturation (biological age). The player’s maturation relative to their teammates (late or early maturing) must be considered not just on the front end of this decision, but also daily through continual periodization and monitoring of readiness and stress of the individual player.

Thanks to the Experts for their valuable input!