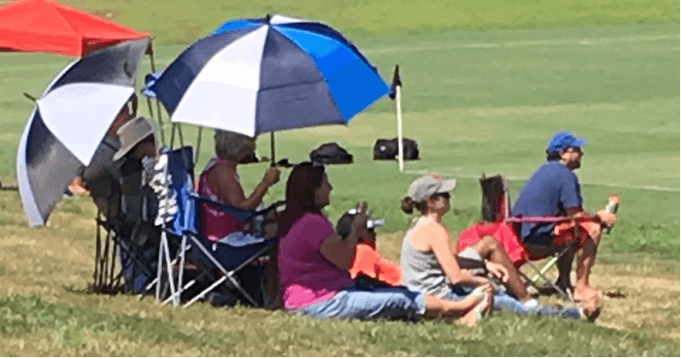 My daughter arrived home a few minutes ago from a weekend away playing two ECNL games. She walked right into my office with a huge smile on her face. I’m thinking, “Awesome, I can’t wait to hear all about her games.”

“Mom,” she says, “You’ll never believe what a crazy soccer parent did to me during the game.”

I sat right up.

She had my complete attention.

“There was this mom from the other team who was acting crazy all game. She was talking rudely to one of my teammates, calling her number – saying ‘Hey, number ….’ Turns out, I got into a tough tackle with her daughter, it wasn’t a foul or anything – but we both ended up on the ground. Next break in play, I glance towards the sideline – and this woman is flicking me off.”

But, nope. My daughter looks over to this mother and she is staring right at Cali giving her the finger.

My daughter, to her credit, looks over at her and says:

I suppose that’s a rather classic response to an unbelievably immature parent.

And, I was just about to laugh it off and tuck it away, deciding to give more attention to my daughter’s witty, confident response than the crazy soccer parent (and giving her a lecture on the power of ignoring someone!)… but I couldn’t shake the feeling that there’s more to be said.

Fan behavior is a global issue at the professional and international level, not just on the sidelines of youth games. I am reminded of a newspaper article I read earlier this year about Nelson Rodriguez, the general manager of the Chicago Fire, and his heroic stand against the fans in the Chicago Fire stadium who were relentlessly yelling an anti-gay chant.

Here’s a link to an article about the stand Mr. Rodriguez was willing to take.

As parents, we need to realize that we must be willing to take a similar stand on our sidelines. I wasn’t at the game today, so I’m not positive it was the same woman, but I can venture to guess this was the same parent who was screaming non-stop the last time we played this team. Given my daughter’s physical description of her, I assume it was.

My favorite verbal exchange from her from the previous game was when she jumped to her feet when a free kick was called near their 18 and screamed to everyone within earshot: “10 Feet! 10 Feet Ref!! 10 FEEEEEET!”

That was the only time I laughed, though.

Most of the time during that game, I was wishing for earplugs.

She spent the game screaming at the referees, giving a loud and obnoxious play by play, talking rudely to our parents on the sideline, and when someone pleaded with her to stop her relentless and annoying and stress-inducing jeering – she hollered at them, telling them to mind their own business.

After the game I felt like I needed to do something, but I was at a loss.

Would it be appropriate for me to wait for the coach of the other team and mention the behavior to him while he was walking from the fields?

Should I mention something to our coach so he could pass it along to their coach?

In the end, I did nothing.

Because tonight, over one month later, it’s unconscionable to me that this same woman continues to act out on the sidelines and her behavior has progressively declined. It’s one thing to yell constantly and be annoying, but to verbally abuse the players on the other team – that’s when you have to draw the line.

This behavior must be stopped.

And it’s up to the parents on the sidelines to stop it.

The parents on her team owe it to their children, the referees, my daughter, all the other young women her team will come into contact with – to bring it to the attention of the coach and club and demand that this behavior stop.

The parents need to stand up for the players, band together, go to the coach and tell them it is not acceptable.

If the coach doesn’t take immediate action (and let’s hope they do! I think it’s most likely many are not aware of the problem) the parents must collectively go to the Director of Coaching, Board, Administration – someone with authority…and bring it to their attention so that this behavior is ceased.

What are we teaching our children if we allow a parent to verbally abuse the players on the other team?

By tolerating this behavior and allowing a grown adult to flick off a 15 year old playing on the other team, what are we saying about what we value?

There is no room for this behavior on our sidelines and it’s time for the parents – all parents – to realize that we are the ones who need to make it our responsibility to make it stop.