How To Survive Your Kid's Game-Time Injuries - Soccer Parenting Association 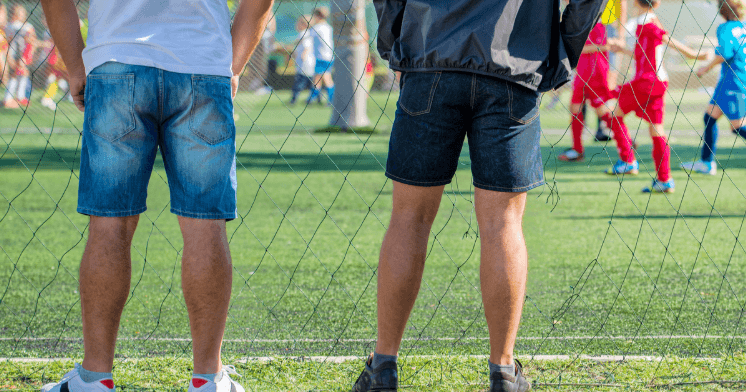 How To Survive Your Kid’s Game-Time Injuries

Nothing prepared me for watching my kids get hurt playing sports.

Before they became actual athletes on actual teams, they brought me a daily dose of couch-hopping contusions, bookshelf-scaling scratches, and backyard body damage. I learned to handle it with the tranquility of a Buddhist monk. Cleaning cuts, administering albuterol, applying ice, and even zipping to urgent care induced less anxiety in me than remembering at midnight that I hadn’t packed lunch for the next day’s field trip.

I knew what to do back then, when, for example, sledding down the stairs in a laundry basket didn’t go as well as they planned. I’d assess the situation and decide whether it called for a hug, a bandage, or an ER. In no time, my kids were back on the carpeted slopes and I was getting ready for the next emergency.

But I got too comfortable. Mistakenly believing I could now handle whatever my kids brought me, I thought I’d successfully scaled one of the most treacherous parenting mountains out there. Turns out I’d only reached base camp. Because when my kids started playing sports, or, as I like to call it, putting their bodies in physically dangerous situations, I realized that all that early experience didn’t add up to much, not from the emotional altitude of the sideline. All those hands-on parenting skills did me little good in a place where it felt like my hands were tied behind my back.

I wasn’t sure I could cope, but after a while I began to adapt. If you train properly, you can too.

That field/court/track/pool where your kids compete is No Man’s Land for parents. If something is really wrong—like ambulance-wrong—you’ll be waved on. Otherwise, don’t even think about crossing the invisible line of demarcation. Make no mistake. It will be hard—like not-glancing-at-their-phone-screen hard. Every muscle in your body will try to pull you out of your seat. Don’t go. Start building resistance at home: ignore the peanut butter knife on the edge of the sink. Step over the balled-up sock on the stairs. Pretend you don’t see the light that’s on in an empty room.

The referee is either retired from accounting, works in IT, or is 12 years old. He is also your child’s first responder. He decides if your kid’s injury is worth even stopping the game. If it is, your coach, who works in sales at a carpet cleaning company, will slow jog (read: walk normally just with his elbows bent) to where your kid is crumpled in the grass. The other players then join him, and soon your child will be completely blocked from view, surrounded by people you wouldn’t put in charge of a classroom hamster.

The moment the game is paused, all the parents will either start staring at you, talking to you, or scribbling in their gratitude journal because they are not you. Probably all three. Think of it like it’s the Oscars and you’re the shoo-in nominee who didn’t win. Eyes will be on your reaction. Be prepared. Think about using your camera’s selfie-mode to practice looks like, it’s-just-my-allergies, I’m-sure-the-bruise-will-fade-before-picture-day, and I-swear-I-saw-an-urgent-care-around-the-corner.

People around you will be as unhelpful as possible. They’ll mean well. Probably. Most of them. It just might not seem like it based on the words coming out of their mouths. At least one parent will turn to you and ask, “Is he ok?” as if you magically know more than they do. The only time you’ll dodge this question is when the injury is very clearly a shot to the balls. Dads will be too busy retelling their favorite “family jewels” joke, while moms wonder silently if this means they won’t get to be grandmas. As you search for a glimpse of your child across the field, the diagnosing begins. The other parents will proclaim that your kid has an ankle sprain, groin pull, ACL tear, muscle cramp, strained hammie, or concussion. Followed by a story about their friend’s co-worker’s sister’s kid who had the exact same thing and [insert the most traumatic thing you can think of here].

The first few seconds after your kid gets hurt are critical because that’s when you’ll decide the seriousness of the injury. You’ll do it with a calculation that includes but is not limited to the game’s score, its importance to the season, your horoscope, and the likelihood that you left your garage door open. Do the math carefully, then decide whether to yell, “GET UP YOU’RE FINE!” or start posting all your kid’s sports equipment on eBay.

The forced shift from being hands-on when kids get hurt, to, basically, eyes-on, was hard for me, but I realize it’s just an early stage of an even steeper climb. The one where I let go and they continue on their own. I’m already fast approaching the maybe-they’ll-tell-me-about-it-and-maybe-they-won’t stage. I know it’s all part of the journey, but I’m terrified. Out in the world, they will get — or feel — hurt. And I’ll have no choice but to watch — if I’m so lucky — from afar. So while they’re still here, playing in the game in front of me, I stay planted in my seat and practice my who-me?-I’m-not-nervous face.