Teaching Expert Doug Lemov on Coaching During the Game (for Coaches and Parents!) - Soccer Parenting Association 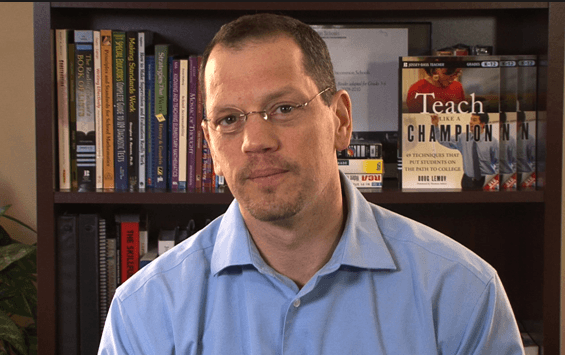 Teaching Expert Doug Lemov on Coaching During the Game (for Coaches and Parents!)

Doug Lemov is a teaching expert.  The author of the international bestseller Teach Like a Champion and Teach Like a Champion 2.0, Doug is also the founder and former Managing Director of Uncommon Schools.  He is a sought after coach educator for U.S. Soccer, US Club Soccer and many other organizations and he has played a pivotal role in the professionalization of our coaching standards.

Sideline Behavior and communication from coaches and parents during games can often be a distraction to the players on the field.  In this clip I ask Doug about what appropriate coaching behaviors/communication looks like in the flow of the game, and how parents can best support the communication of the coach.  Enjoy!   (TRANSCRIPT BELOW)

Something I'm excited to ask you about is, you kind of opened the door to it there, that statement, is the type, and this is from a coach's perspective, what roll, and I assume there's different styles of coaches, just like there's different styles of teachers, but what do you think a coach's role should be during the game when kids are trying to learn? There's been a lot of discussion about that lately. Like over-coaching, joy sticking versus just sort of ... I don't know what the educational term of that would be, but like helping in the moment a child grasp a skill. What's their role in a game?

First, do no harm. Here are the two ways you can do harm. One is you can't teach anything during the game. You can only cue players to remember things that you've built into long term memory during practice. So if you're trying to teach them things during the game or explain things during the game, you're probably distracting them from the game and disrupting their performance and making them perform worse.

Can you describe what that looks like? I think it's an important thing. I'm coaching a U10 team right now and I often do find myself, let's say playing the ball around the back and the ball is in the left side of the field and I might talk to my 11 or my seven and say, "Hey, open up," or just give her a little cue knowing the potential is there. Is that okay?

Yeah. I think that's great if she's not ... first off she's not on the ball so I think it's fine. I think that as long as you've taught repeatedly in practice what does it mean to open up when we're building out of the back? I'd say if it's cued to me as a reminder in language that I'm familiar with of a task that I'm familiar with that I understand, probably tactical, then I think it's reasonable to say, "Open up, Kayla." Especially I think this is why it's really important to plan the language. I want to say it the same every time. Is open up different from wider, from width? I think if I'm consistent about my cue during training, then I can use the cue sometimes during the game to remind players of things.

I have to be cautious about it. I don't want to overdo it. I think the other thing is kids often learn to tune their coaches out on the sideline because the coach is saying so much and often saying things that they can't use. They're describing things what happened previously, what you should have done on the previous play, which is useless to me, so I learn to tune out the coach so I think what you're describing is actually a good example of successful coaching because you're describing something to a player where you've anticipated what she should be doing before she needs to do it and therefore it can still be helpful to her.

Most coaches I think ... often, I don't want to say most, there's oftentimes on the sidelines I see coaches telling kids what they think that they should have done in a previous situation and I don't think ... for the most part, I don't think that's productive.

Let's flip that to parents, because that's the other thing that we see so often and I talk a lot in soccer parenting about the difference between supportive and distracting and hostile communication. I think it's really key for parents to understand what distracting communication looks like because they often feel like they're helping and in fact they might be cueing their child, because you know as a parent you're watching the game and you're pretty much watching your kid 80% of the time. When the ball's on the other side of the field you're kind of sometimes aware of where your child even is.

So if a parent feels like they're cueing and helping, what would be your advice to a parent in a game situation?

I'm hesitating because I'm not sure that I have the ... the answer for me has been over time to say very, very little. It's taken me a while to get there.

I think it's very hard to be useful for a lot of the reasons that ... the only way you could be useful would be to tell a kid before something happens, something tactically useful that had been ... that was a cue to something that was reinforced in training, but I'm not at training so I don't know what the cue is and I don't know what the coach has been telling the players and you're just as likely to be telling ...

There have been times when I was sure that I played in the back two and I was sure that ... there was a game where I was sure that my [inaudible 00:04:54] was out of position and that he was supposed to be marking differently and after the game I was like, "So it seemed like to me maybe you were like ... ". "No. Coach is telling me to do that. We worked on that all week in practice."

I think you have to respect how much you don't know about what the coach is asking the players to do. I think even if you ... any adult on the sideline can only be helpful if they're cueing on something that they can ... about a future event and it still does not ... I think there's a reasonable range of roles for parents to make but for the most part I don't think that's my role as a parent. I think my role is to if I want to shout something it's to encourage them and say great job, keep working, keep at it.

I think the other thing is the other thing just for coaches and parents is that oftentimes the things that we say as coaches and parents are emotional. I'm thinking about what you said. You were talking about to your number seven, let's just say her name is Kayla, with Kayla. "You've got to get wide, Kayla. Wider, Kayla. We talked about width," or even implicit in your voice as frustration or her parent, "You've got to hustle, Kayla."

I think a lot of people think ... Look, there are times to be emotional with the player, I get that. But oftentimes when I'm emotional with a young person what I'm doing is inserting a set of variables that distract the player from the thing that I'm telling them that they need to do as a coach. If I'm shouting at you and telling you to get wider, a whole series of questions come into Kayla's mind. Why is she shouting at me? Does she shout at everybody? Does she shout at Macy the same reason she shouts at me? Why? Does she sound like my mom when she shouts at me? All these things are questions that are a distraction from I need to be wide right now. I think that one of the first things that coaches can do is calm their interactions with players when they're cueing them during the game and make it ...

I need to be strategic about when I'm intense. There are some times, maybe the halftime talk, maybe sometimes I say, "We gotta get in there girls," but for the most part, that's something I have to manage, but for the most part tactical guidance is better when it's emotion free and I also think there are similar elements for parents there. So many of the things that I say, I think generally speaking parents should say less, somewhere between less and much less, and they have to be alert to the emotional valence of what they say because it's destructive, distracting, just as likely to make their players play worse and just as likely to degrade their relationships with their kids when they come off the field.