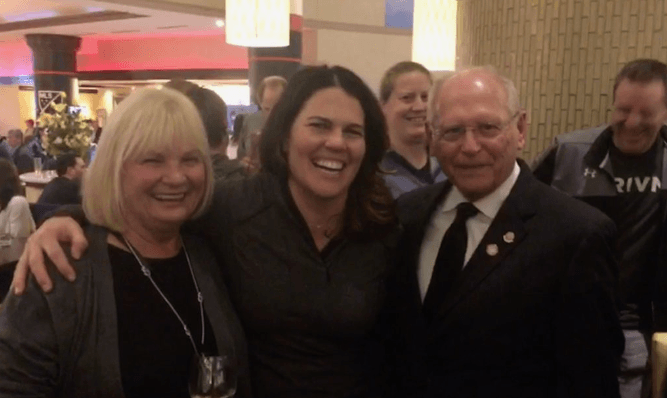 Later tonight Dr. Joseph Machnik will be inducted into the U.S. Soccer Hall of Fame, an honor he deserves for his roles in coach and goalkeeper education, as a referee, coach, commentator, leader and pioneer. Dr. Machnik’s legacy runs deep, and I am immensely proud to say I am even a small part of it.

As a young staff coach for the No. 1 Camps, Doc’s belief in me inspired me towards a career in coaching. He trusted me to lead, he created a safe yet stressful space for me to learn to teach and develop my coaching voice and confidence, he held me to extremely high standards and demonstrated a sense of professionalism, performance and enthusiasm in his coaching that was both captivating and exhilarating.

As a 11 year old first-year camper, it was on the fields of the No. 1 Goalkeeper Camp at Loomis Chaffee School in Connecticut where I was first introduced to the Goalkeepers’ Union. I felt powerful beyond measure standing amongst 150 other goalkeepers knowing I was right where I belonged.

That first summer as a camper, I made it to the final rounds of the 1 vs. 1 Shoot-Out Challenge against all the older boys and felt absolutely invincible, powerful, strong, and confident. Earlier this year, as I recollected this to Doc, he laughed in his deep, joyful laugh and said, “I rigged that.” I don’t doubt that for a moment – because he truly is a master at his craft when it comes to teaching and motivating.

Doc had the ability to motivate and reach us emotionally so we would join with the fantasy he created in his demonstrations – and push ourselves harder, try more, be braver than we could ever have done in reality. We literally created a new reality for ourselves right there and then.

Creating these fantasy – reality moments is one of Doc’s greatest strengths. I mean, who could imagine running full speed and diving head first over 3 or 4 “ponies” (i.e. people crouched over their knees in a ball with their hands covering the back of their heads) to do a forward dive only to land crashing down on your forearms to the amazement of the campers who were inspired to bravery? Who could imagine pushing yourself to your absolute physical limit in Pressure Training only to stand with a hundred equally exhausted goalkeepers, screaming at the top of our lungs that we wanted to do more? It was in these moments as campers and staff we felt a part of something much bigger than ourselves and where we learned to harness the power we had inside ourselves.

One of the things I am most proud of along my personal soccer journey is the fact that I was Dr. Machnik’s first female camp director. His confidence in me was inspirational. He trusted me, opened the door for me, and always evaluated me based on my skills and abilities as a coach and leader – not as a female.

Doc and I, and his amazing wife Barbara, recently reminisced about the old days. Society and culture was much different in the early 1990’s. We laughed as he said, “You put up with a lot of shit.” And I did. Simply put, it’s just how things were back then. And, thankfully, they aren’t that way any more – because men like Doc opened the door to women like me – and then helped us kick it down.

There are thousands and thousands of goalkeepers, players, coaches, soccer parents, lovers of the game all across the world who owe a debt of gratitude to Doc.  We will be celebrating alongside him tonight as he accepts his place in the U.S. Soccer Hall of Fame – grateful for our experiences with the No. 1 Camps and thankful for the mentor and friend we always have had in Dr. Machnik.

From so many of us in the GK Union – thank you, Doc.

My Goalkeeper’s Journey: A Parent’s Perspective

Previous Post Dear National Council: We Are Counting On You. Next Post Sheriffs FC & DSAL Provide a Cost-Free Soccer Experience