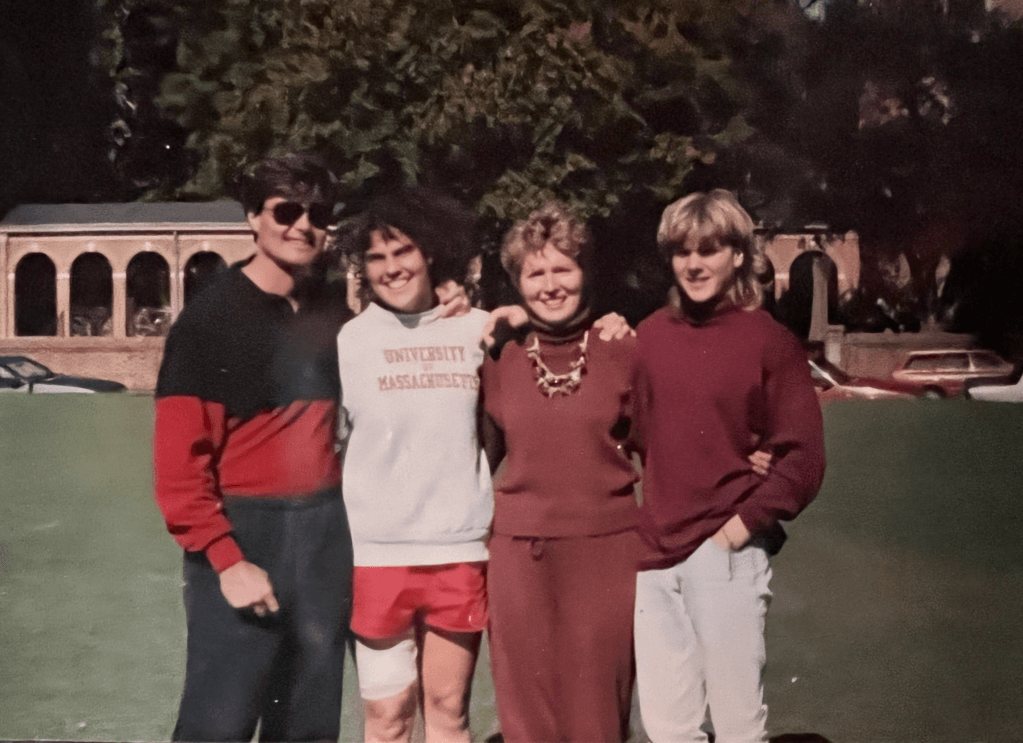 Thank You, Mom and Pop

Twice in the past month I’ve had someone ask me: “Was it Nature or Nurture”? First, in the podcast interview I did with the Topodium Group: Winning the Podium, Chris Sharman asked me about my entrepreneur mindset and how it developed: Nature or Nurture?  Second, sitting at a restaurant during the United Soccer Coaches Convention discussing what it was like to grow up in a coaching environment where I was often the only woman on the field, Cris Gilmore, a male coach asked me from across the table: “Where did the confidence come from – was it Nature or Nurture?”

Nature or Nurture. Inherited or Acquired. Genetic or Learned. Was the resilience and self-confidence prewired in me from birth, or was it the result of external factors and life experiences?

I’ve often mentioned how fortunate I was to grow up in progressive Reston, VA and to be born in 1971, the year Title IX was voted into law. Sports was always an option for me, and I found myself on the top of the wave of American soccer opportunity. I grew up in the game as the game was quickly building relevance and as opportunities were expanding: ODP was developed, goalkeeper specific camps were available, quality coaches came to America, there were suddenly opportunities to play in college. I benefited from all of these and, in fact, have continued to ride the wave with my previous roles in coaching and my current work with Soccer Parenting.

All of this being said, what was the most important factor when it comes to the Nature or Nurture conversation?

There was no guidebook for parents raising an athlete in the 70’s and 80’s. My parents went with their instincts. And for both myself and my brother, Shane – a phenomenal multi-sport athlete who competed as a gymnast collegiately – there was a strong undercurrent of autonomy in which we were always treading water.

These were the themes we were raised with: Be who you want, You can do anything you want, We will support you, You are capable.

From the very beginning my parents made their decisions about what was best for me based on what I wanted. As a child, I wanted nothing to do with traditional female norms. There were no dresses or bows. I wanted to play with the boys.  Thankfully, my parents never felt the need to conform to societal gender norms. In fact, many of my 4-6 year old friends (and even the Principal of my elementary school!) thought I was a boy.

There’s a funny family story my mom tells of a friend I played with almost every day when I was 5 years old. My mom overheard a conversation between he and I when he learned I was a girl. “You are not!” he screamed. “I am too!” I screamed back.  My hair was short because it was easier that way, I wore Shane’s hand-me-downs, and my days were full of Big Wheels, playgrounds, and running around with all the boys in the neighborhood.

Be who you want.

When I was 6, I decided I wanted to be a goalkeeper. I was infatuated with Kenrick Kessler, the goalkeeper on my brother’s team. I can remember sitting cross legged on the sideline of my brother’s games, elbows on my knees, arms bent, with my chin resting on my fists…watching Kenrick’s every move in the goal. I curiously observed how he stood, how he talked to his teammates, how he aggressively came forward for a ball. I remember looking at the way he balanced his weight on his feet, knees bent, hands up, preparing for a shot, and then jumping up myself to mimic his movements as I watched him from the sideline. My parents’ response to their young daughter proclaiming a future as a goalkeeper?

You can do anything you want.

When I was 11, I tried out for ODP for the first time.  I remember the tryouts clearly. I was smaller and younger, as it was a U-14 Virginia State Team. I was out of my comfort zone and intimidated by the older players. I also vividly remember the coach talking to me after the tryouts to tell me I did not make the team, but that I should come back next year and try again when I was older. My heart felt heavy. I walked back to the car with my father – droopy and sad, my feet dragging under me.

We will support you.

Later that year, on the way back from the summer we spent with my grandparents in Maine, I was dropped off at Loomis Chaffee School in Connecticut for a week of No. 1 Goalkeeper Camp. I was, by far, the youngest girl at the camp of what I remember to be around 150 boys and 5 girls.

I have no idea how my parents heard about the goalkeeper specific camp run by Dr. Machnik in Connecticut when we were from Virginia. This was pre-Internet searching times. In reflection years later, I understand this was my parents’ way of supporting me after not making the State Team.

At the end of a mid-week field session at the camp we all crowded in close for a pep talk. One hundred and fifty of us dirty, sweaty, banged up goalkeepers, pushed together with our arms around one another. It was the solidarity of the “Goalkeepers Union” at its finest. Dr. Machnik’s raspy voice screamed encouragement and motivation. I will never forget the moment. For a few seconds, everything got quiet for me. I looked up at the enthusiastic, older, male goalkeepers who surrounded me and thought: “These are my people.”

The takeaway here is not about what I learned at the camp, even though it was tremendous. The real takeaway is in the fact my parents had the gumption to even leave me there! There were no cell phones, I was 11 years old, 8 hours from home, one of the youngest campers, and one of the only girls.

In the nature or nurture conversation – this was the nurture.  It was an unrelenting lesson in being capable and self-sufficient. My parents usually made us figure out our rides, pack our bags, do our laundry, and set our alarm clocks. Shane had to pay for some of his gymnastics by spending extra hours in the gym coaching, and I had to fundraise for my first ODP trip to Europe. These experiences led to confidence, drive, resilience, determination – all qualities I manifest every single day.

And while sport was the catalyst for the lessons learned, that fire within me to excel in sport, it was my parents who gave me the match. In fact, they handed it to me in just the right way, so I could light the fire for myself.

Thank you, Mom and Pop.

Previous Post JOIN US FOR GRATITUDE WEEK!!!! February 14 – 20. Celebrate With Us! Next Post Video Messages of Gratitude From Our Soccer Parenting Community