The Disconnect Between Spectators and Referees - Soccer Parenting Association 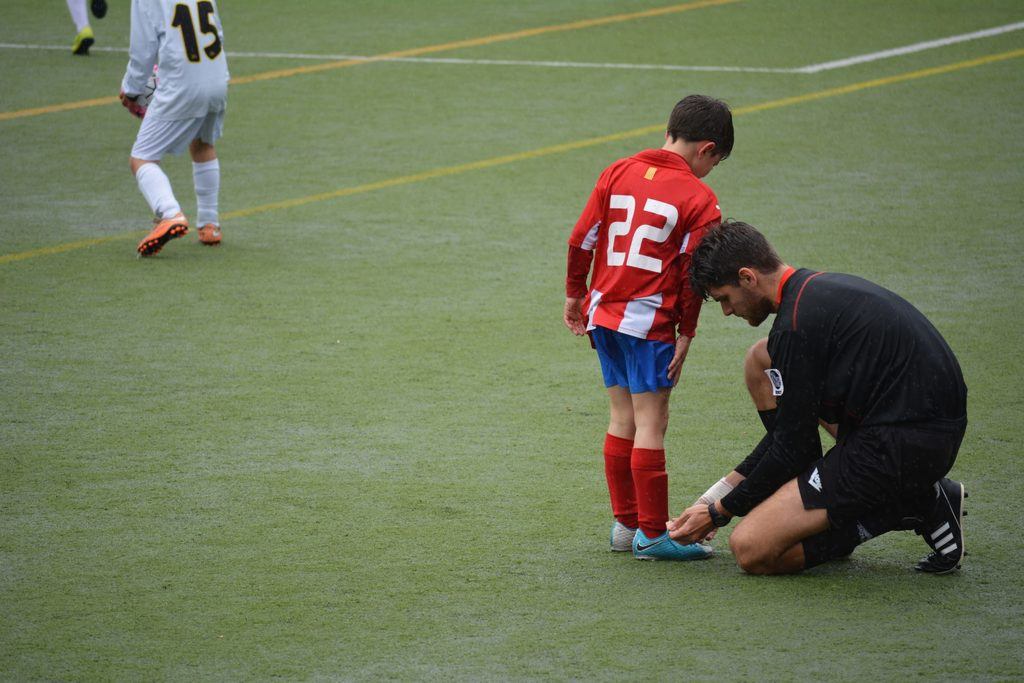 The Journey from Soccer Parent to President

In 2010, my oldest son started his soccer journey at the ripe old age of 5. I had played two seasons of recreational soccer in first and second grade and that was the sum total of my soccer experience at that time. Due to low numbers of volunteers, I ended up coaching his rec teams off and on throughout the early years.

I was the typical ignorant, bombastic parent/coach, joysticking my players and yelling at the referee when I disagreed with his calls. I figured I could make up for what I lacked in knowledge with a hearty dose of enthusiasm. Eventually, through study, I began to see the error of my ways and switch up coaching styles, but in 2016 my boys switched to a local travel team. With the switch to club soccer, there were coaches already in place, but they sorely needed referees, so once again I volunteered, this time as a referee.

I quickly learned that it’s a whole different world when viewing the soccer pitch from inside the touchlines. By 2018, I had also accepted a position as President of the Board of Directors for my sons’ club. Having filled all four of the possible adult roles in youth soccer (board member, coach, referee, and parent), I often find myself trying to reconcile misperceptions and misunderstandings between the people filling these various roles.

Becoming the Man in the Middle

I got my first USSF grassroots referee badge in 2016, and have reffed club soccer (mostly U16 and U19) since then, as well as VHSL high school soccer beginning in 2018. I started way too late to be doing the high level matches I aspire to, because I physically can't keep up with that play anymore, but I passionately believe that any player from U6 to the World Cup deserves a referee who cares about doing their very best every game.

I spend two to three hours daily reviewing match footage and discussing situations in online referee forums to better my understanding of match dynamics and the Laws of the game, not because I'll ever be a pro ref, but because my U10 rec players deserve my best and maybe I can help others better understand the game we all love. As a referee, I'm not really all that experienced I guess, but hopefully I can share some insight into the misconceptions and misunderstandings that arise between the officials on the field and the coaches and parents on the touchline.

I think that there are several things that lead to unruly parents blowing up at officials. The primary driver of most of them is that, as referees, we are there to serve the needs of the game, not necessarily the players. That's drilled into us from day one in grassroots instruction. If you'll indulge me I'll elaborate.

Refereeing the Game and not the Players

Unlike most other traditional American sports, soccer is foremost a game of flow. Hockey is about the closest other thing out there, and maybe basketball, but in soccer flow is king. As referees we are taught to call what needs to be called but to make sure the game continues to flow with as few stoppages as possible. This creates the concept of a trifling foul, where a foul definitely occurred but was inconsequential to the results of a play and was not unsafe in the opinion of the referee. This is a concept that just doesn't exist in football, baseball, basketball, or hockey. So parents see a foul occur and don't understand why we don't call them. Often it's because they're deemed trifling.

Another issue is that the line for determining a trifling foul vs one we call changes from game to game. In the pros, it's very often a yellow card for just stepping on an opponent's foot. I referee many very low-skill recreational and high school matches. If I gave yellow cards in those matches every time a clumsy teenager stepped on someone's foot, games would be over in the first half because too many players would've already been sent off, and, of those 45 minutes, the ball would've been in motion for about 15. It's unfortunate for the players that we can't call every single foul but the game must flow, and so we adjust our calls to the level of play that appears to be mutually acceptable to the players. (The pro refs do this too, there's just a LOT more consistency in the level of play so you don't notice as much.)

Why there is a Disconnect

Often, the disconnect between the field and the stands comes with where this line is drawn. We parents are VERY protective of our young and tend to get upset (myself included) about contact that the players deem perfectly acceptable. I've been on the field before with parents screaming from the stands about the game getting out of control while the players were just grinning and having a great time. I’ve also asked my sons about what I considered to be egregious fouls from the stands to be told that there was actually no contact involved and they tripped over their own feet!

In the history of the game, there were originally no officials. Soccer players would solve their own disputes over rules violations (a more gentlemanly game back then for sure). In time, players realized they needed an impartial third party to whom they could refer their disagreements. The "referee" was born, and our purpose is literally immortalized in our name. So we generally allow the players collectively (i.e. the game itself) to tell us what is fair and what is foul for THAT particular match. Every match is different and, as every parent knows, there's a lot that's acceptable to their kids that's unacceptable to them as parents. So, bluntly, it's not up to the stands (or the coaches) to determine what's fair and foul, it's up to the 22 players on the field to tell me where to draw the line.

Important Things to Consider about a Referee - as a Parent

Perhaps most important is that soccer officiating depends 100% on the angle on, and distance to, potential fouls. You cannot possibly understand this unless and until you take to the field as a referee. American football has 22 players on the field. Plays run for 10 seconds at a time, with seven officials watching every aspect of play. Soccer also has 22 players, but only three officials, and only one of those is likely to be within 20 yards of any potential foul, and the game rarely stops. Add to that the fact that most of us are pushing our physical limits while trying to watch 44 arms and 44 legs at once and you can see the difficulty. On the field, I see fouls from an up close and personal perspective. I call things foul that everyone in the stands thinks are fair, and often when I'm sitting in the stands I can identify fouls that due to lack of elevation or change in angle would absolutely be invisible to me on the field. Parents shouldn't be blamed for not understanding this, but it's a HUGE disconnect.

One last thing I'll mention is that I think there's a misunderstanding (on both sides) of what cards are "meant" to do. We are taught that a card is a tool to cause a behavioral change. The best interest of the game is to keep 11 players on the pitch and have them behave as civilized human beings. If they can't do that, then we need to change their behavior, and a card is one way of doing that. But there are also others.

As an example, I was refereeing a moderately skilled U12 game last fall at a tournament. White had the ball near the touchline, made a quick turn right as the red player got there, and in that turn caught an elbow to the face from the red player. Of course, white's coach was yelling for a red card from his position 20 yards away (it would've been justifiable), but I was literally 6 feet from the contact and I could read in red's reaction that it was purely accidental contact from a clumsy 11 year old. I blew the whistle and awarded the foul, but kept my cards in my pocket. I approached the red player, informed him that I could be red carding him (keeping him out of the remainder of this game and possibly the remainder of the tournament he'd spent at least several hundred dollars to attend), but I didn't believe he intended for the contact to happen. I informed him that, regardless of intention, he was responsible for the conduct of his individual body parts, and that I fully expected him to make sure that each and every one of his parts behaved very well for the rest of the match.

Now the whole time I was having that conversation, everyone in the technical and spectators area was screaming for the send off, but guess what, the red player continued through the match and played a squeaky-clean remainder of the match. The game, and the players, were better served because I was able to achieve the behavioral change without the card, even though the card would've been fully justifiable. Once I explained this to white's coach at halftime, he was OK with the decision, and by the end of the match even told me that he was very impressed with my game management.

It's our Children's Game, Not Ours

If you're still with me after all of this, thank you for indulging me and I'll just close with this. Do we call everything we should? Depends on your measuring stick, but I'll guarantee even the best refs miss something every match because we're all human. No coach has ever coached, and no player has ever played, a mistake-free game in any sport ever known to man. Why do we expect perfection from officials? There's a lot of potential disconnects between spectators and officials, but I absolutely feel that more grace should be extended by the spectators than is often given. Almost every one of us is out there doing the best we can, just like the players and coaches. I will concede that not every official is as much a student of the game as I think they should be, but I guess that's true of everyone else out there too.

And lastly, for what it's worth, I feel that if we officials are going to ask for grace from the spectators, then we should do everything in our power to understand and enforce the rules to the absolute best of our ability in every single match we officiate. It is the commitment to doing our collective best to understand our individual role and the role of others in the beautiful game that can stop the negativity and return civility to the soccer pitch. We must remember that the youth game belongs to our children, not us. It’s our job, as coaches, officials, parents, and club administration to make sure that they have the best environment possible in which to grow and learn.

About the Author Ben Zimmerman

Ben Zimmerman has traveled the road from crazy soccer parent, to coach, to referee, to club president. On that road he’s seen just a little bit of everything that the beautiful game has to offer and is committed to helping all of the different parties on the pitch reach a greater understanding of each other. Ben can be reached with questions or comments at zimmerbm@gmail.com.

Rules for the Ride Home

Lessons From the Parking Lot

How Your Kid Wants You to Behave