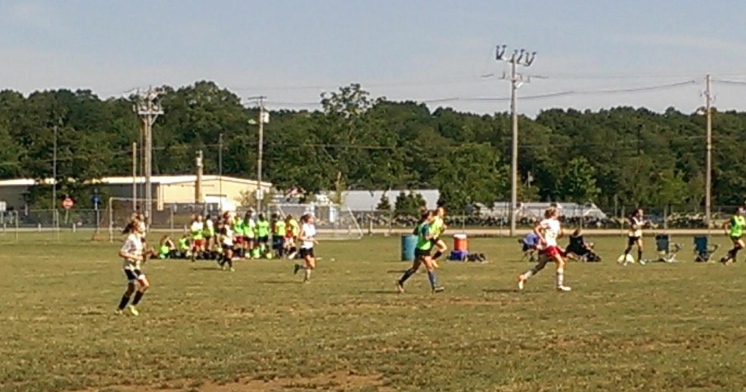 I spent the past week coaching at Girls Region I Camp at the University of Rhode Island. If my memory serves me correctly, it was 18 years since my previous visit to Region I Camp as a coach and over 25 years since I attended as a player.

It was tremendous to be back.

A couple of my former coaches were still at it – John Daly from William & Mary was working with the U-16 girls program and, with moments of nostalgia, I found myself coaching alongside Terry Underkoffler – one of my first goalkeeper coaches, and John Gregg – a lifelong friend and high school training partner.

In recent years, there has been significant youth soccer league expansion and development, directly impacting the depth and quality of players available to tryout for and play with the US Youth Soccer ODP. The advent of the Boys’ Development Academyand the Girls’ ECNL has, in many areas of the country, removed the most talented players from the ODP mix – leaving a secondary pool of players available for the ODP program.

Instead of being discouraged by the drop off in the overall skills and quality of the players at the ODP camp last week compared to 18 years ago – I found myself excited for the vast possibilities that exist when it comes to the development of the game in the United States.  I was struck by the importance of teaching and properly educating these ODP players, the opportunity that exists with each of them, as a means of developing the game.

As these US Youth Soccer ODP players – some of them from areas not serviced with the ECNL or Academy, some of them not able, not willing, or not talented enough to make the ECNL or Academy teams – develop as athletes and soccer players, our nation will develop a stronger and deeper pool of soccer enthusiasts. It’s these ODP players that will potentially strengthen the Division I, II and III college game, who will largely make up our next generation of youth soccer coaches, and who will raise future generations of young soccer players.

What is the single most important factor in the development of all of our players?

THE QUALITY OF OUR COACHES

Children have a lot of choices when it comes to how to spend their time playing sports these days. There are now more and more opportunities to participate in lacrosse, field hockey, swimming, basketball, football, and ice hockey. In fact, according to participation rates by the Aspen Institute participation in youth soccer has been on the decline since 2013.

The answer to both of these questions – YES.

Yes, we have the capacity to attract and retain more children to the sport of soccer if we have better coaches working with our novice players.

Yes, we have the capacity to better develop the children who are currently playing soccer if we have better coaches working with our players.

Ice Hockey has the highest participation growth rate for youths 6-12 years old who are playing team sports United States (going from 0.5 percent of children in 2008 to 1.1 percent in 2015). Interestingly – but I believe NOT coincidentally – the USA Hockey Association does something soccer does not.

USA Hockey requires ALL coaches, even volunteer parents coaching a U-6 team, to take an 8 hour (on the ice) coaching course plus an on-line coaching education course related to the age they will be coaching. If the parent is not able or not willing to take the courses – they are NOT ALLOWED to coach youth recreation level ice hockey.

I believe a primary reason Ice Hockey is the highest growing youth sport is because of this coaching education requirement. Players are attracted to the sport, have a better experience and stick with the sport because of the high quality training environment.

However, I found myself disheartened while at the camp and working with a group of field players and goalkeepers. When I asked the group of 12 and 13 year old field players if they understood the most effective types of runs they could make into the box from flank service – AND ALL OF THEM LOOKED AT ME WITH A BLANK STARE – (no one said Near Post, Far Post, Slot)…I realized we have a problem – and a real opportunity.

These were not novice players. Most of these players have received professional coaching from their various clubs – many of them for the past 4 -5 years – and they had not been taught (or didn’t remember) the types of effective and potential runs they could make from flank service.

We have the capacity to better develop the kids who are playing – and when we do so, the game will flourish.

I was thrilled with the quality of coaches working at the camp – many of them assistant college coaches aspiring towards a career in head coaching and all of them passionate about the youth game.

I was thrilled with the experiences the young players had – out of their comfort zone – challenged – engaged.

While the ODP program may have seen a drop off in the overall quality of the player involved, the potential for continued development for each of these players is exciting. I am reminded about and encouraged by the important role the US Youth Soccer ODP program fills in the United States.