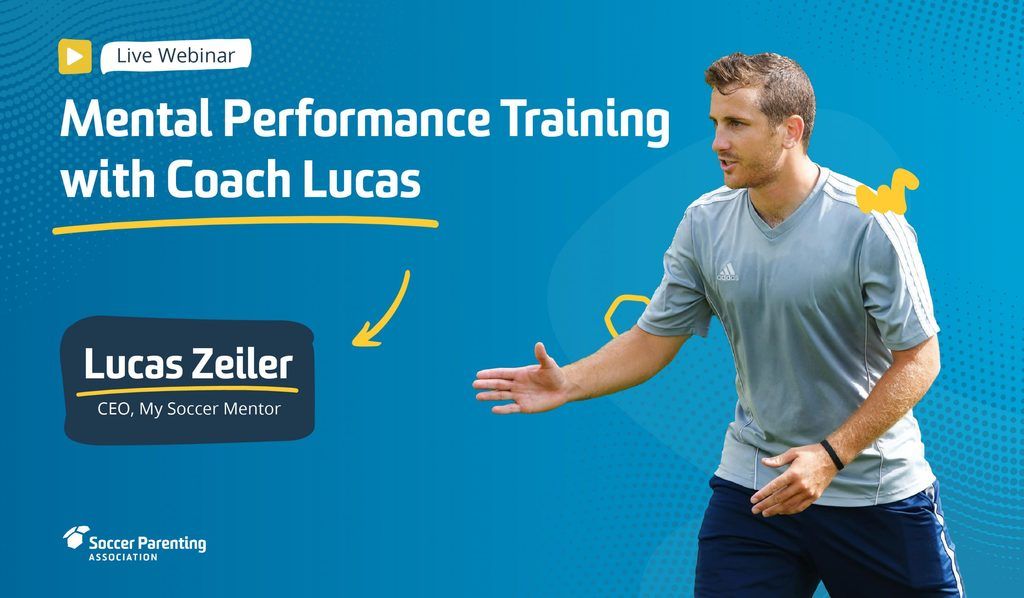 Thanks to everyone who joined the webinar with Mental Performance Coach Lucas Zeiler on Tuesday 24th May! We discussed how players should prepare for the College & Professional Levels, what parents can do to help their players this season on the mental side of the game, and how players can achieve Ultimate Confidence this season - along with some of your questions towards the end too.

Here you can watch a quick recap of the webinar, or if you want to watch the full webinar - head to the Soccer Parent Resource Center - our education platform - to grab a FREE 3-Day Pass!

We hope you enjoy!

Our Youth Soccer Education Platform for Parents and Coaches.

Why The Game Should be Fun

Skye:
So, if you were standing in a room full of coaches, youth coaches, who are, I want to say full time in the game, but dedicated coaches. Eager to learn, eager to impact, they consider their identity, part of their identity as being a youth soccer coach. If you had 200 of them standing in front of you, what would you want to say to them based on the work that you're doing?

Lucas:
That's a good question. It'd have to be somewhere along the lines of like just make the game fun. For me, fun equals function. Fun should be functional. Fun should be embedded in this thing. And I think for coaches, we get confused in that... look, we want to have good careers as coaches. We want to do well. We want to win. We want to progress and move up the ladder in this coaching world.

Lucas:
And we forget that, look, this is about service. This is about service to the players and the players have to be first. And the reason why these players are there is to have fun. And at the younger ages, they want to have fun and be with their friends. At the older ages, they want to have fun and just compete and just play and express themselves the way they love to compete and play the game. And we have to, I think that would be the topic, yeah.

Skye:
I love that. And I think that word is, I love that you use that, too, because it's a word that people misassociate with it not being serious, I find in the speaking that I'm doing. And what we know about fun is that even Olympic level athletes say that they would quit their sport if they weren't having fun, so there is certainly a component. I'm curious why you said that though. I know you put some thoughts to it when came up with that. So, what's the opposite of fun? If they're not doing that, what's the environment that's not? If fun works for kids, what's the environment that doesn't work?

Lucas:
It's certainly both. So, we can't forget about the fun part. Yeah.

Lucas:
And I think a lot of players and coaches should really get a better understanding about what mistakes mean and having some more awareness and some understanding about mistakes. And the common example that I use is Kobe Bryant. And so, I ask players, I go, "How many of you know Kobe?" They all raise their hand. And so, these players know that Kobe is a five-time NBA champion, multiple MVP, two gold medals, all of this legendary stuff. Arguably one of the best basketball players who ever played.

Then I tell them, "Guess what? Who do you think holds the record in the NBA for the most missed shots? It's Kobe Bryant. It's Kobe Bryant." So, and most of them won't, they don't believe that, so I have to show them on Google. I have to show them like, "Look up the top 10." If you look at the top 10 list, you've got LeBron James on the top 10 list of most missed shots in the NBA, Michael Jordan, Allen Iverson, Kobe Bryant. There's something here. What's going on? They're missing the most.

So, players need to understand that it's not binary here. It's not about missing or making it, it's about the courage to get after it again and again and again, and the persistence. That's what makes up greatness. And so, if we can have the conversation more about that and have the player understand that, it's going to make a massive difference for players that are afraid to make mistakes.