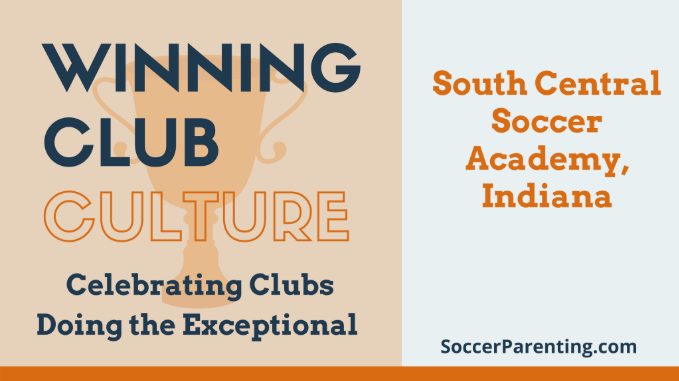 I met Mark Spiegel at the NSCAA Convention last month in Los Angeles. He walked up to the Changing the Game Project booth where I was working and John O’Sullivan, a friend and mentor of his, introduced us. I was immediately struck with how connected and present Mark seemed in conversation with me, full of energy as he seemed to almost bounce on his toes and listen intently, even with his eyes, as he looked right at me through his large, round glasses.

I knew Mark was someone I needed to talk more to, as I could only imagine the positive impact he could have on young players and their families with such strong communication skills.

The conversation then did not disappoint – nor this one.  In fact, I sat down with Mark last week and did three interviews with him.  This one for our “Winning Club Culture” Series – discussing a program he has started at South Central Soccer Academy in Indiana, where his is a coaching director, with the aim of engaging parents with the club and the game.  The other two interviews are 1. Learning more about and promoting a non-profit he founded call Make Your Own Ball Day (MYOBD.org) and 2. Mark telling his concussion story – full of important reminders for parents and players.

The “Winning Club Culture” Series draws attention to a youth soccer club doing the exceptional – with the hope that the attention and awareness one day makes it a  standard for many clubs.

If you would like to draw attention to a youth soccer club doing the exceptional to be highlighted in the “Wining Club Culture” Series, send me an email today!

In the meantime, enjoy this conversation with Mark Spiegel from South Central Soccer Academy in Indiana.