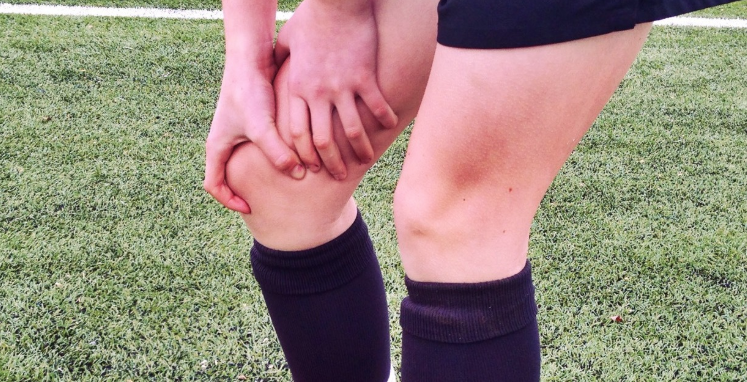 What a horrible feeling it is to watch your child limp off the field injured.

My daughter has been anticipating the Jefferson Cup Tournament all winter. Her team has been training 4 days a week since January with this tournament – as well as the remainder of their Spring ECNL Season – as the motivation. So, 10 minutes into the first game of what was eventually a 4 game weekend, seeing her come off the field with an apparent knee injury – my heart sank.

I took a few deep breaths for good measure and told myself to remain calm as I walked towards the Athletic Trainer who was evaluating her in the on-site training room.

My daughter had held the tears back until she saw me, then one trickled down her face just as the words, “I don’t think you should play any more this game” came from the Trainer’s mouth. The Trainer gave her ice and instructed her to return before the next game to be evaluated and to have BOTH of her knees wrapped because she was concerned that her left knee, not the one she hurt, seemed to have a muscle imbalance and that her ACL had a lot of movement in it.

In my brain, it wasn’t that simple:

In fact, by the time we left the training room I had already texted her coaches saying basically that much!

Maybe I rushed to a decision.

My daughter has had this happen a few times in the past couple of months – a sharp pain in her right knee when she hits a ball with the inside of her foot. It hurts immensely for about 1-2 minutes, then the pain goes away, and she feels completely better after icing it or slowly getting back to training.

I know this pain – many soccer players do. Her coach said, “Oh yeah, that’s happened to me before” and I remember feeling this many times over the years as did a few of my soccer friends I mentioned it to. But it happening to a coach/old player vs. a 14 year old player doesn’t really feel the same to me, especially when the 14 year old player is my daughter. I was really concerned if I let her keep playing that she could have a severe injury as the fields were muddy from rain and the trainer had indicated a muscle imbalance that was concerning enough to her that she wanted to wrap my daughter’s knee prior to her playing again.

I am incredibly fortunate to have some real experts in my back pocket.   A quick call to my friend, John Cone, Ph.D. – ACL Injury and Soccer Fitness Expert, helped me understand what could be happening with her. His first question: “Where exactly is the pain?” His second question: “Is she going through a growth spurt?”

The location of her pain, he said, makes sense given the stress from the ball and the fact that she is going through a growth spurt.

Next comes the question, “John, do you think I am being unreasonable if I tell her she can’t play any more this weekend?”

He assured me it would not be unreasonable to have her rest and get properly checked out.

As a parent, I had a decision to make:

Should I make her sit out the rest of the weekend or let her play?

Long story short – she sat out the morning game and played the remainder of the weekend – with absolutely no further injury or pain – and here is what I learned from the experience:

1. Athletic Trainers are well-intentioned and extremely helpful – however they are not Doctors. If there is a need to get an Athletic Trainer involved during or after a game, you really should follow up with a visit to an orthopedic doctor you trust.

Turns out Cali has NO muscle imbalance or weakness in her left ACL. The doctor we saw on Monday understood why the trainer, obviously trying to protect Cali as best as possible, could have deduced that because her right hamstring was a bit tight which would have restricted the movement in that knee compared to her other one.

Of course, we will do some physical therapy to be stronger – but because this is more a growth related issue than anything else – the best thing we can do for her is to make sure she is getting adequate time to recover between sessions.

2. If your child needs to have both knees wrapped in order to participate, they should probably not be participating.

The moment the trainer said she wanted to wrap both of her knees for the next game, I told myself I was not going to let her play. It’s one thing for a light muscle strain or a jammed finger or maybe even a slightly sprained ankle – but for a knee???? No way!

I also would put in a disclaimer here saying – if it were the ECNL National Championships I may feel differently (just a little) – but this was the first game of the entire 3 month Spring Season.

Cali didn’t get either knee wrapped and was able to participate. I felt if she went to warm up for the next game and was in any pain at all, she should not play. I didn’t want a wrap to help support something so it felt a bit better even though it wasn’t. If she couldn’t play pain free without having it wrapped, she shouldn’t be playing.

3. It’s easy to turn into a CRAZY SOCCER PARENT when your child is injured.

I couldn’t help, a few times, have a thought pop into my mind that was saying, “You need to let her play so her coaches don’t think she is weak or so she doesn’t lose her starting spot.” I assure you, that thought lasted about ½ a second and was quickly disregarded…but I had it.

Cali’s coaches were incredibly supportive as we were trying to figure out what to do for the weekend. They were unemotional about the subject (unlike me) and suggested she warm up for the next game to see how it felt and agreed that if she was in ANY pain, she would not play and risk further injury.

4. Only your child can know what type of pain they are in.

This is a tricky one.

Teaching your child to understand the level and type of pain they are feeling and to make a decision as to their ability to participate in training or a game is a really important lesson.

How do we do this?

Ask them to rate their pain when they mention something hurting. Is it a 1 or a 10? Could you play through this and be fine or is it something that would limit your ability to participate. Do you think it’s something that could get worse if you play on it? Do you think you are hurt versus injured?

Understanding and gauging pain is an essential skill for an athlete.

So, thankfully this weekend had a happy ending (well, they lost in the Finals to FC Virginia so not exactly happy all the way around) and in addition to that, I am grateful that I will be more mentally prepared if she is injured in the future.