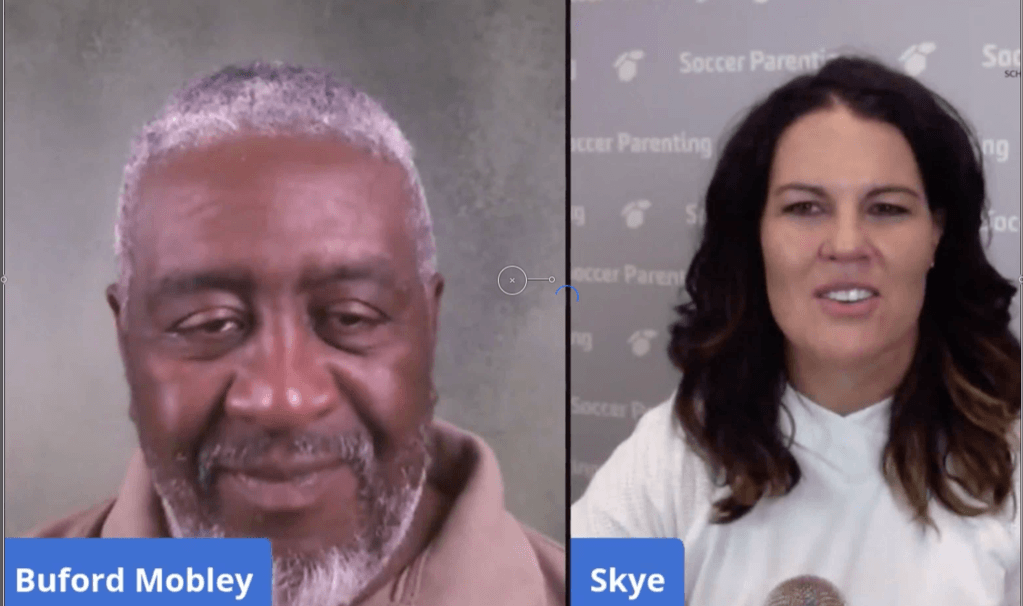 One of the most important messages I can relay to soccer parents is how important you are to an improved youth soccer landscape.  For so long parents have been told you don't have a place in the soccer development of your child - and the truth is - you actually have a very important place. In fact, parents are a large part of the solution to the problems we face!

In this almost 8 minute clip I dissect some of the problems we face in youth soccer, in order to help you feel empowered to solve them!

Skye:
Parents, we're really an important part of the solution, and when we talk about solution we might then say, "Well, what's the problem?" And again, just to be clear parents are integral to this, but these are some of our problems. The coaching culture in the United States is really disconnected, so whether that be disconnected via the lack of collaboration that exists between US Club, US Youth, AYSO, USSSA, SAY Soccer, whether it be that or also whether it be the lack of connection that too often happens between the professional coaches and the rec volunteer parent coaches.

So this disconnection is really an issue that we have. There is a real imbalance of power in the coach/parent relationship. I'm so happy to say that I feel like this is starting to change as so many clubs are embracing this concept of parent engagement and parent education. We're starting to see this change but it is important for us to recognize that ... And I think something that's really funny about this is that when I present and I talk to coaches, coaches say, "Oh yeah, parents have all the power. They can get me fired. They can make my life miserable. They can be a crazy soccer parent and ruin things for me, and just make the season very difficult."

And then, I talk to parents and parents say that coaches have all the power because they can start their child or not, or how their child's going to feel when they get in the car is really related to how the coach interacts with them and the quality of that interaction. So it is interesting to say that ... I say an imbalance of power but there's just a lot of power issues. I think the foundation of that is trust, which is why I present and talk a lot about establishing trust, and I do a lot of coach education on establishing trust, and parent education on that.

Parents are not involved enough in the right ways. We do need to realize that we are uniquely positioned as I said to support our children in certain ways and there are times when we do need to be engaged and active, and we need clarity on what those right ways are. There's real education that parents have to learn that they don't know now about things that Buford you were sort of alluding to that you learned along the way. The importance of not focusing on the result but instead focusing on the process. That's a growth mindset. That's foundational to a high performance mindset.

Again, high performance whether they're going to be playing pro or whether they're going to play high school, but it's still them creating and our children developing a high performance mindset that they'll take with them in life. Coaches are not confident in leading like they want. The coaches are not necessarily getting the education that they need about relationship building and leadership. They often feel like there's a distress between coaches and parents and they can't do what they want.

I hear from coaches all the time, "Oh, I can't do position player Rondos," or "I can't develop the kids in the way I want because if it looks like playing then the parents are going to get mad." The parents want to see kids standing in lines and cones, and this is what they're used to from other American sports, and so if I veer away from that and we go into more of play-based learning which the science says is the best way for kids to learn, but coaches say if I don't that then the parents will revolt.

If I don't focus on winning the parents will revolt, so the coaches are there if we're not confident in doing often times what they want. Coaching is lonely and it's important to recognize that. I mean, there are so many stories from coaches that are so sad about the experiences that they've had, and it's hard for them, the parents are revolting. I'm coaching a team right now, I haven't won a game the whole season. I'm on the second to the top team in my club and we don't really have a league that's right for us, so we're in the top league and we're losing every game. We're getting so much better and if we go down to the league under us we're going to win every game, and that's not where we want to be.
And so, after a game I walk away, we lose again. It's lonely. It's hard, and parents I think need to have some empathy around that as well. The sidelines too often don't support the player or referees. I do a lot of work on sideline behavior. The core mission and values are often forgotten by coaches and parents, and players are not inspired enough. So this is the youth soccer landscape and parents are the solution. Parents are a very important part of the solution to solving all of this.

And this is something that I said on a podcast maybe a year ago now, and I said it and I actually got emotional as I was speaking because this is when it suddenly clicked with me that really why I started soccer parenting was because I was struggling, and I was able to come to that realization in that moment because my daughter was thriving. She was happy. She had just committed to play in college. Things were going so well for her. She had just come back from an amazing experience in Spain with TOVO.

So she was doing well, and then all of a sudden it clicked with me that I needed to be really honest with myself, and I think this is a job that we need to do as parents. Until we have some sincere honest conversation about the way that we've treated our children and how we've impacted them both good and bad we'll really be missing an important part of the solution.

So parents, we have to get real with what we're doing and we have to learn to follow our instincts, and what I say all the time is that parents you don't know what you don't know, and it's your job to get educated about performance mindset and growth mindset, and self-determination theory, which I'll talk about here in a second.

I think that I built this presentation around this concept of asking questions because so often we're looking for answers. How is my child going to get to college? What do I need to do? But really, what we need to be doing is asking better questions, so maybe it's not as you learned what team does my child need to be on, or why aren't they on this, instead it needs to be how can I support my child in developing the strongest mindset that I can. Maybe it's questions like that that we need to be asking.

And so, this is a picture of my daughter when she was little, like I can do anything in the world. How can we facilitate that mindset with our children? So I always start by asking and I'm not going to dive into this too much, but for those parents that are listening I'd ask yourself this, what does thriving look like? If we want our child to thrive on the soccer field and in life what does that look like? And I encourage you to actually reflect. Journal about it. Sit down and write down eight things that thriving looks like whether it be specifically for your child or not.

Maybe it's thriving looks like they have a smile on their face and they're excited about practice and going to practice, or maybe thriving looks like them sitting on the bench when they're not in and they're really engaged and focused, and supporting their teammates, or obviously it looks like performing well on the field. So I'd encourage parents to think outside the box and create not a list of one or two things, but like eight, 10, 12 things of what thriving looks like so that we have some direction.
Going back to the quote I said earlier we cultivate what we honor, so if we can then think about what those things are and honor those things then those are the things that we'll cultivate. So my first question for parents really is, am I embracing the struggle?