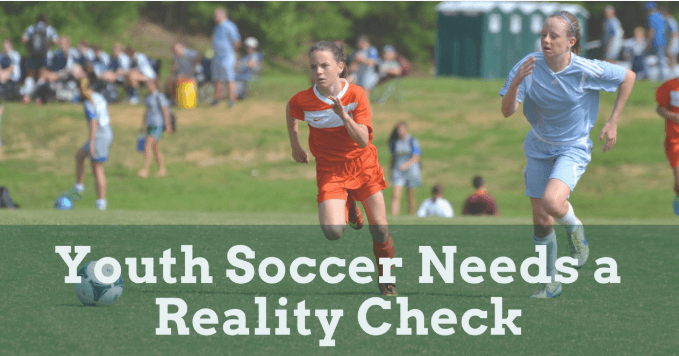 Youth soccer is not working and it’s time to start to find solutions and fix the problems!

Players deserve a better environment in which they can reap all the life-changing benefits of a youth soccer experience, Parents deserve guidance, support and leadership when it comes to making sure their child thrives, Coaches deserve to have and provide the most life-enriching interactions possible, and our Clubs need an environment where they are celebrated as the connection point for communities and families everywhere.

Simply put, we have lost our way.

Not all the time or in all ways, but the deep rooted disconnection that too often exists between parents, coaches, clubs and players has resulted in an environment that is not adequate for the players, regardless of their various levels of participation.

There is a solution. It is possible for us to change course, to change culture.

Last week I stood on a raised platform at the National Soccer Coaches Association of America (NSCAA) Convention in Los Angeles, California and delivered a message of change and reform to a room full of willing to listen, eager to learn and ready to change coaches who acknowledged that our current youth soccer system is broken. I called on coaches to rebuild their relationships with parents by extending trust.

With that in mind, to aspire towards cultural change, we must first wholeheartedly acknowledge our current behaviors and the environment we have established with a sincere and introspective look into the realities that currently exist within youth soccer.

The Realities of Youth Soccer Today

When I was getting my USSF “B” coaching license in 1998 I had a question about the topic I was to teach about and wanted to run a few ideas by one of the instructors. My request for help and discussion was met with an attitude of impatience and an unwillingness to connect. Simply put, I was turned away and told to find the answers from my fellow candidates. I walked away feeling embarrassed for asking a question, stressed about my testing, and anxious.

This is a deeply rooted cultural problem we have in soccer that could be described in various ways – I choose here to refer to it as ego-driven. There are also many examples of this ego-driven culture from much higher up the organizational soccer chain. For example, FIFA and the irresponsible leadership that has been previously elected, their corruption and lack of transparency or from U.S. Soccer and their refusal to hear and respond to the 40,000 parents who signed a petition asking for questions to be answered about the recent Birth Year Mandate.

There is a deep-rooted systemic belief in soccer that the superiors do not talk to their inferiors. This cultural norm has made its way all the way from the FIFA Boardrooms to our community fields. When a parent approaches a coach to ask a question about the game or their child and is met with resistance, they feel the same way I felt when I was turned away from my “B” License instructor.

We need to work together, collaborate, and connect.

Coaches must open the door to parents, and because this is new territory in the coach-parent relationship, they must also clearly define welcome and accepted behavior and be willing to close the door when necessary because there also must be healthy boundaries in our relationships.

From a parent’s perspective, the coach holds all the power. If a parent is stressed about something that is going on with their child, they too often do not feel as though the door is opened to them to seek council and advice from the coach for fear of it having repercussions on their child when it comes to playing time or making the team.

The solution to these perceived power positions is establishing trust.

Many of these STRESSED PARENTS APPEAR CRAZY. However, all these stressed parents really need is some information, for the door to be opened to them, for someone to listen and try to understand and to help. Once the the door is opened, they gain perspective, usually calm down and, most importantly, their child benefits.

IMAGINE WHAT AMAZING PROGRESS WILL HAPPEN FOR THE GAME WHEN COACHES AND PARENTS STOP USING THE CRAZY SOCCER PARENT AS AN EXCUSE FOR NOT ENGAGING WITH EACH OTHER?

It’s time for us to stop letting the Crazy Soccer Parent control the youth soccer environment. Both parents and coaches allow this to happen.

Parents don’t want to be perceived as a Crazy Soccer Parent so they elect not to ask questions and allow the stress to mount. Coaches have been treated poorly, accused of mistreating kids, had their valuable time wasted and been pulled off mission by the Crazy Soccer Parent who is irrational, living vicariously through their child and is unable to be satisfied. Unfortunately, because of the Crazy Soccer Parents, coaches have gone as far as to adopt policies of not talking to parents, of shutting parents out and not engaging.

Crazy Soccer Parents need to be pushed to the side and treated as outcasts. We must make them powerless.

If our cultural norms are more substantial and rooted in strong relationships between coaches, parents and clubs – it will become abundantly clear that Crazy Soccer Parents simply do not belong.

Sadly, yes, this will potentially affect the children of Crazy Soccer Parents.

The Soccer Parenting Value Statements of Active Health, Coach Integrity, Love of the Game, Balanced Outlook, Healthy Living and Soccer Knowledge must once again be the values that drive all of our decisions as parents, and coaches must seek to adopt similar values relevant to their perspective.

Our required coaching education does not teach our coaches how to be a coach of significance in a young child’s life and societal pressures of fame and scholarships and performance too often sidetracks parents and leads them to lose their perspective.

Together, coaches and parents can come back to where we need to be, where we must be for the sake of the children.

Youth soccer is not working, and the glaring disconnection from the behavior of coaches, parents and clubs to the mission and values of youth soccer is largely why.

If coaches and parents approach their interactions full of integrity – and therefore align their values and their actions – then we will realign our cultural norms so all soccer playing children can thrive.

All players, regardless of their level, just want to have fun. The vast majority of our soccer player children play soccer simply to participate, not because they have lofty goals to which they aspire.  For them, fun is different than for a player seeking a high level of performance.

Most soccer playing children will only ever play at a recreational level.

This needs to be okay.

This needs to be celebrated.

There must be a safe and inviting place for all children to play, regardless of their athletic potential or mentality.

We know the benefits of participating in sports when it comes to our children. They are more likely to grow into healthy adults, stay in school, not do drugs, go on to college, not get pregnant and more.

Is anything more important than our children’s health?

And yet, time and time again, we are allowing – even encouraging – our children to stop playing soccer because it seems like they don’t have a “future” with it and they are not good enough.

Good enough for what?

If as coaches we know the vast majority of players are going to be playing at the recreational level, why are we over-organizing practices for them as they develop so they get bored or even frustrated? All they want to do is play and have fun, that environment should be simple to provide.

We recognize we are lacking when it comes to developing the most technical and creative players at the higher levels, and yet we have not created a system that encourages children to experiment and explore their capabilities and creativity at a very young age.

In fact, we have failed to learn from the glaring anecdotal and scientific evidence right in front of us, and instead of finding a different and better way to develop players, we continue down the same tried and not-working paths, even paving the same paths again.

So many of the exceptional players we have produced in the United States who are playing at the highest of levels – on the men’s and women’s side – all have one thing in common: they played all the time.  They could not get enough of the game, and other games, growing up. Playing consumed them. They played with the kids in the neighborhood, in the streets, at indoor facilities – often times outside the presence of a coach who was evaluating them – any chance they could get.

Instead of acknowledging this and building a grass roots developmental model around it, we have taken our best players and decided the best thing to do is to completely control their development – every moment of it from the age of 11 or 12 – by putting them into competitive soccer situations where they feel they are constantly being evaluated. Then we wonder why these developing players are not taking more chances and being creative and thoughtful?

And when coaches do think about doing something outside the norm that encourages this free play, they use parents as an excuse – saying the parents expect more than just “playing” with the Pay-to-Play model. If parents were more engaged and coaches and parents and clubs trusted each other, this would likely not be the case.

What if the model was Pay-to-Develop Essential Life Skills? Would parents be more willing to pay for that?

We can all get better.

Too often we have framed the problem by blaming either party.

The problems have been identified. Identifying the problems is the first step towards changing behavior and therefore eventually changing cultural norms.

Now, let’s move on to the solutions.

Let’s create an environment and culture in which all soccer playing children will thrive. Where they develop a love the game that will take them into adulthood, experience soccer at the highest level possible for them given their athletic potential and learn the important and valuable life skills and lessons soccer is uniquely positioned to teach.