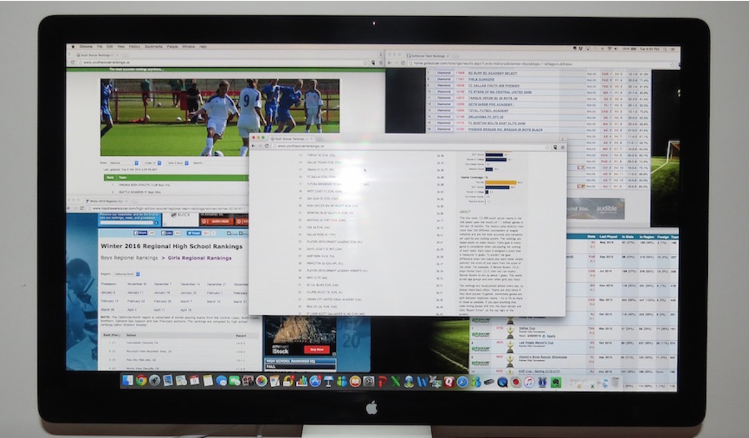 …and then the past hour happened.

I spent an hour of my life navigating between Got Soccer, Top Drawer Soccer (where, yes, I am sad to admit, I purchased a subscription so I could see the numbers), and YouthSoccerRankings.us checking out rankings on everything from teams of 9 to 18 year olds, to individual players, to regions….At one point I had 7 browser windows open!

To sum up my conclusions after the past hour, I’ve decided on a better title for my article:

“How Youth Soccer Rankings are Wasting Our Time”

While I am tempted to end my article at this point so as to not waste your time thinking about Silly Rankings – I do have a couple of points to make.

I am suddenly reminded of Albert Einstein’s quote:

Einstein sums it up quite well.

Is it really possible to rank 133,000 youth soccer teams accurately, especially when the only finite statistic we have at our disposal to rank against are goals that were scored/games won.

After all, does the score always reflect which is the best team? Aren’t there easily 10-15 other factors to consider that are not really quantifiable such as the tactics of the coach, the focus on winning over development, injuries on the team, the weather, the referee, etc.

And yet, knowing how fallible the numbers are – WE STILL RANK TEAMS.

How have we become a soccer culture so fascinated with ranking teams and players?

Kevin Payne, CEO of US Club Soccer and former USSF Board Member, provided some historical perspective on the subject in my recent interview with him – when he said:

I think through the years we have not had a very clear focus on what the purpose of youth soccer was. In most countries players who are capable of achieving elite levels are funneled into a pathway that focuses in a very deliberate way on progressing them through different stages of development. It’s all focused on developing each player to their highest level.

Because youth soccer in this country underwent its greatest growth spurt really in the absence of a professional league, it became an end in itself.

Whereas in sophisticated, developed soccer countries like Brazil or Argentina or Spain or Holland the focus is on developing players. No one (in these countries) is very concerned about the outcomes of youth soccer games.”

Which leads me to my second point.

I do believe that the majority of SoccerParenting.com members are aligned with the Soccer Parent Value Statements and don’t care about rankings.

However, I also know Americans are absolutely fascinated with numbers and statistics. I suppose this is why I actually pulled out my credit card to buy a membership to Top Drawer Soccer so I could check on statistics – THAT I DON’T EVEN CARE ABOUT!!!….

As Rupert Cornwell put it in his Independent article, “Why 9 out of 10 Americans Love Statistics”

…Numbers explain why soccer…will never conquer American hearts. The most popular US sports are statistically sliced and diced every way, every day. In baseball, the most number-swamped of them all, each year brings a new mathematical formula to unlock the game’s mysteries.

Alas, soccer has proved impossible to reduce to numbers. Sure, the Americans are trying. The World Cup drew a blizzard of statistics, from the number of assists to pass-completion rates and total passes by individual players. But to no avail. Soccer provides psychological truth. But there’s only so much number-crunching you can do with a 0-0 draw, followed by a penalty shoot-out.

So, simply put – while we don’t care – we are drawn to the fascination of the numbers – and culturally are tempted to be interested.

3. WHY WE SHOULDN’T BE TEMPTED BY YOUTH SOCCER RANKINGS

It’s a slippery slope – jumping into the rabbit hole of rankings. While they possibly serve a purpose for flighting youth soccer tournaments – and that can even be drawn into question – the only purpose they serve after that is to draw parents and players into the empty abyss called “focusing on winning more than development.”

I am going to just come right out and admit it, when I was wasting that hour looking through the ranking sites, I caught myself thinking thoughts like “Wow, Concorde Fire is ranked 13 in the country and my daughter’s team tied them in Florida” or “XYZ club should be ranked ahead of ABC club – I’ve seen them both play.”

As soon as the focus of our thoughts goes towards winning – and who is better – and who won what – then we lose track of the focus being on development.

As John O’Sullivan of the Changing the Game Project so deftly put it in his SoccerAmerica article in 2013, when GotSoccer started ranking U-10 teams,

This age is a time when players need ample game minutes to hone their new skills at a variety of positions. Players need to be encouraged to take risks. Defender and goalkeepers should not be afraid of playing out of the back. Attacking players need to develop the confidence to beat opponents on the dribble, and possess the ball instead of launch it up the field. Any coach will tell you that these things usually go out the window if your sole focus is to win your games. Unfortunately that is what…rankings will do; hinder what little emphasis there already is on development and put all the onus on winning games.

The mere fact youth soccer ranking companies exist, and therefore we can assume there is a demand for the data, requires us to be extremely cautious of the affect they have on the fabric of the youth soccer culture in the United States.

At the end of the day, we all just need to be sure we remind ourselves when necessary, that they mean absolutely nothing.

I think rankings are a terrible disservice to the game. I really think it’s a very cynical approach to youth soccer. It doesn’t serve any real purpose.

Okay – enough time wasted on Silly Rankings – let’s just all agree to not give them any more thought…EVER!