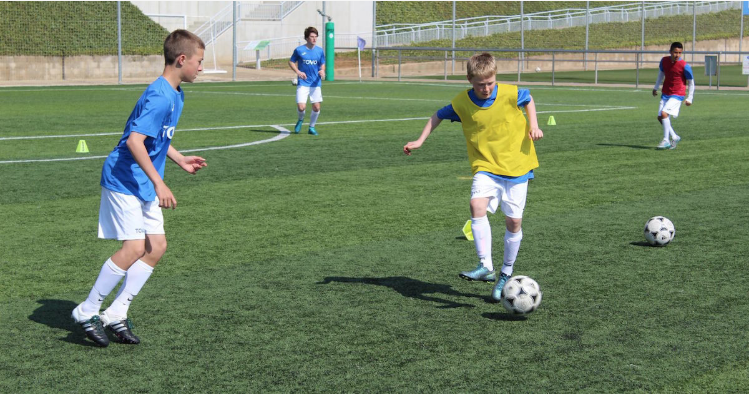 Seek an Environment Where Your Child is Being Coached on Thought, Decision Making and Awareness

If my 15 year old child were trying out for a team and was an exceptional player – great on the ball, quick to make decisions, moving off the ball to make the game simple for their teammates, hard working and focused, technically advanced – the coach would be thrilled. I can see him or her now, their eyes following them, arms crossed, a smile growing on their face, slightly nodding with excitement and approval…In the coaches mind, they are saying “Ahhh, QUALITY.”

Coaches seek quality players because they know they provide part of the foundation for a successful season, a stellar developmental environment, and potentially less stress and more fun.

As a parent, I seek a quality coach.

I seek a coach who cares about my child and their personal and athletic development. I seek a coach who is hard working, focused, determined, thoughtful, inspiring, and relentless in their determination to make each player better. I seek a coach who has the ability to break the game down into the simple details, introducing my child’s mind to the beautiful game of soccer.

A talented 14 year-old American player I know travelled from the United States to Barcelona, Spain seeking a QUALITY developmental environment. He returned after 10 days at TOVO Academy Barcelona with Director, Todd Beane – electrified.

I sat down with him upon his return and he pulled out his journal – filled with pages and pages of notes from his trip, beautifully drawn diagrams of practices and explanations of the finer points of the game.

Usually a relatively quiet boy – the smile never came off his face during our conversation and the words kept flowing. He’d turn the page of his journal and his voice would peak in excitement as he started in on another story, another lesson learned, another concept he was taught during his 10-day adventure.

THE CONCEPTS ARE REALLY SIMPLE

Well – if they are simple – why hadn’t he – the product of some of the best coaching environments we have to offer in the United States – implemented these concepts into his game before?

I was, on one hand, thrilled for this young player and his personal experience – and, on the other hand, acutely aware of the glaring issues we must address in the youth soccer developmental environment.

Of course, there is more to coaching than explaining “simple concepts.” There is an art to the delivery, the words used, the tone of voice, the passion. And, of course, I know that players must be willing and developmentally ready to learn.

But, I refuse to allow justifications or misnomers or myths to permeate this discussion and provide excuses.

This is a kid who plays pick-up and Futsal every chance he gets outside of his 4 time a week practice schedule, has been invited to U.S. Soccer Training Centers, always has the TV on watching games and who plays at the highest level available for youth players in the United States.

His lack of understanding of the “simple concepts” of soccer – after playing for almost 10 years – is simply a result of the coaching environment and developmental culture he has been a part of.

It’s not the fault of a single coach, or a single team – this is a larger cultural issue.

I asked this 14 year-old player: “If you could talk to the coach of a U-8 team, after the quality soccer environment you just experienced in Spain, what would you tell them?”

His eyes lit up at the thought of impacting young kids through teaching a coach what he had learned.

“When I was growing up,” he said, “All we did was juggle, pass and work on technique at practice. Then we would just play without instruction.” He quickly chimed in with: “The club is better now than when I was younger, but” he went on to say:

“The coaches needed to stop us when we were playing and they needed to give us more instruction.”

I shook my head in agreement when he said this. I was taken back to watching my own child grow up in the game. As an experienced player and coach, but not her coach – I found myself at her training sessions wanting to scream out loud as the definition of insanity played out in front of me: Doing the same thing over and over again and expecting a different result.

Why would you play 4 vs. 4 at the end of every practice, for instance, and never pause play to demonstrate to a child the importance of attacking the free space (or closing it down defensively) – or not stop and show the 2nd attacker that opening up and finding a passing lane was essential to the success of the team? Instead, over and over again, the same mistakes would be made. And, when a coaching point was made, it usually dealt with technical mistakes. “Your first touch needs to be cleaner!” “Lock your ankle when you pass the ball!” “Keep the ball on the ground!”

No doubt, there are exceptional, quality coaches working with our youth players.

Somewhere between the coaching education available and the race to keep up with the growing demand for youth coaches, a complacent coaching culture has been established, where coaches do too little or have the wrong approach, the result being players who operate below their capabilities.

This culture is demonstrated by two common statements we hear much too often in the youth soccer game:

Yes, of course, kids learning through playing. But in training, at least a portion of the playing – must be guided. Too often, the ball is put out and the coach relaxes, feeling as if practice is all but over.

On the contrary, this is when a coach must demonstrate their quality.

This is when a coach must stop the play at just the right time and hold the attention of the young players as they show them the beautiful game in action, guiding them to see the puzzle within the game that creates magical moments of decision-making brilliance.

It is in this special moment that a quality coach – creates quality players.

This young player I was talking to was referencing simple topics such as “scanning” and “playing the way I am facing.” Surely, those topics had been explained to him before. “Yes,” he said, “they had. But much more emphasis was placed on them in Spain, we were forced to do them.”

The coaches didn’t let them continually make the same mistake over and over and think “they will get it eventually as they play more.” Instead, the coaches in Spain taught them! They demanded a higher standard of awareness, thought and decision making.

I am not sure why this is debated in youth soccer. Of course you teach tactics to young players. It’s called decision-making.

The young player I was talking to about his time in Barcelona was thrilled with the decision-making concepts he had been taught. His notes about these subjects spanned pages and he said as he excitedly flipped through them: “It took me an entire week to understand the most basic decisions and make them a part of my game.”

The mark of a student who really learned something, he was quick to tell me himself:

“First – you perceive. To do this you must be really aware of what is happening around you. Second, you conceive. You think of all the possible actions you can take. Third – you decide. You are intentional, you decide what you are going to do with the ball BEFORE you receive it. If you can do that, then you can do the fourth – Deceive. This way you keep the ball – and make play unpredictable.”

Of course that’s not large-scale tactics of group defending in a man-down situation or the finer points of attacking play in a 4-3-3 when playing against a wide playing 4-4-2. But – when we think of the beautiful game and how it’s supposed to be played – these are the most basic of tactical decisions a player must make: What am I going to do with the ball so my team keeps possession when I receive it based on the players around me, the ball, the space on the field, and my options?   Perceive – where and how can I move to possibly receive a ball so I can….conceive, decide and deceive….

I asked him “Haven’t you learned these concepts before?” Maybe using different words, of course. But hadn’t he, in his almost 10 years of playing, thought about these things, been introduced to these decisions before?

“The coach would mention them – but never made us do them,” he said.

How many times do we hear youth coaches say things like “Know where you are going before you receive the ball!” or “Get into a passing lane!” or “That was too predictable!”

It’s too easy for coaches to make the focus of a session, or of a season, or in the case of this talented young player – the focus of much of his development to this point – be on the physicality, the technical skill, the execution – instead of the thought, the awareness, the decision making.

Quality coaches focus on the thought, the awareness, the decision making.

Imagine if these items – the thought, the awareness, the decision making – were the primary, fundamental focus points for our youth development environment?

Imagine an environment where players are acutely aware of the field, of the position of the players, of the placement of the ball and how everyone is moving in tuned to each other within the flow of the game. We all know the magical feeling of watching the beautiful game being played with this flow.

Players don’t innately perceive their surroundings and conceive the decisions available to them. They are taught.

It is quality coaches who are able to ignite the flame within each young player to be struck with this awareness of the power they have to manipulate the game through their decisions about where and how to move or what to do with the ball.

It is not watching more soccer on TV that will ignite this flame of awareness.

It is not learning through playing that will ignite this flame.

It is not focusing on technique at a young age that will ignite this flame.

Those things will keep the flame burning.

The coach will be the ignition.

It is the quality coaches gifted with the ability, the desire, the determination, the focus and the attention to maintaining a quality environment based on decision making, not on technique or physicality, that will ignite this flame.